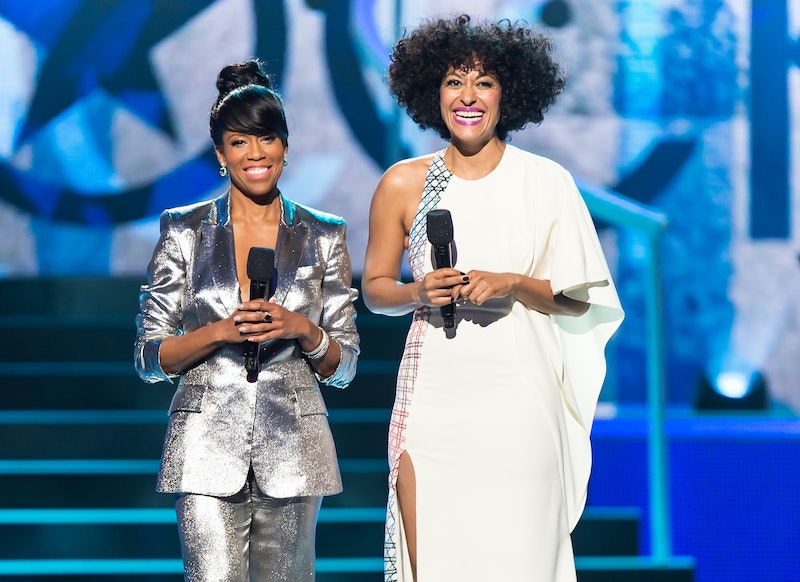 Let me tell you a story. Picture it: four of your favorite actors reimagining one of the greatest sitcoms of our time. Tracee Ellis Ross is recreating Golden Girls with an all-Black cast, including Regina King, Alfre Woodard, and Sanaa Lathan. And in true Golden Girls fashion, viewers should thank them all for being a friend by putting on this show for us.

The black-ish star announced on Sunday, Sept. 6, that the all-Black Golden Girls special will be happening via Zoom by posting an image on Instagram of King, Woodard, Lathan, and herself photoshopped over the show's original cast. Based on the image, it seems that Ross will be Rose, famously played by Betty White, while King is set to play Dorothy, as originally done by Bea Arthur. Woodard will take on Sophia, who was played by Estelle Getty, and Lathan will round out the new cast as Blanche, as fabulously portrayed by Rue McClanahan.

The Golden Girls special will kick off the series Zoom Where It Happens, a new initiative from the video conferencing service. Lena Waithe will host the episode, which will be helmed by The Old Guard director Gina Prince-Bythewood. It's not known whether the actors will reenact a beloved episode or if they'll be taking on new material inspired by the show, but regardless, we're sure to be in for some sass, snark, and old-school glamour.

Of course, this special Zoom event likely wouldn't be happening if it wasn't to raise awareness for a good cause. The episode will spotlight racial justice and civil rights organization Color of Change. Fans will be able to tune in for free as long as they register to receive messages about how to make meaningful change before the upcoming presidential election this November.

Recreating an iconic, women-focused sitcom like Golden Girls is fitting for Ross, who recently had a reunion with the cast of her own former show that's all about female empowerment. Ross had a Girlfriends reunion on her current hit series black-ish, which was a long time coming. "These are women I grew up with and love deeply and it was easy to tap back into the magic of our chemistry and how much we love each other," she told Entertainment Weekly about the episode. "It was giggles on top of giggles on top of giggles."

The Golden Girls recreation will happen live on Tuesday, Sept. 8 at 9 PM E.T., meaning you only have one night to prepare yourself. Maybe start by getting your best pastel loungewear and concocting a cheesecake worthy of Rose, Dorothy, Sophia, and Blanche's approval.