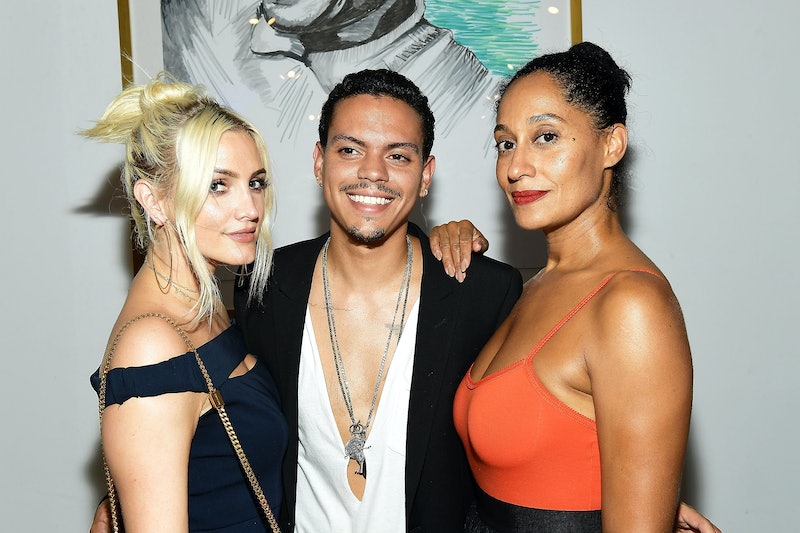 In honor of husband Evan Ross turning 33, Ashlee Simpson Ross got a little cheeky, sharing a photo of the Star actor in his, well, birthday suit. In the second slide of a two-photo Instagram carousel on Aug. 26, Evan stood completely naked behind steamy glass shower doors, with only a strategically placed towel to keep Ashlee’s post safe from the social media platform’s censors. Even so, Evan’s sister Tracee Ellis Ross couldn’t seem to resist the opportunity to roast her little brother a bit, replying with two face-with-tears-of-joy emojis and the words “the shower photo” to show her amusement.

The Black-ish star wasn’t the only family member to weigh in, either, with Evan’s mother-in-law, Tina Simpson, commenting, “Celebrate the Birthday Suit!” and adding that she loves and is thankful for him every day. The Real Housewives of Miami’s Larsa Pippen called Ashlee a “legend” for the post, while other celebrities, including Odette Annable, Cassie, Khadijah Haqq, Miles Richie, D-Nice, and DJ Ruckus shared some birthday love as well. Evan, for his part, seemed to take the good-natured ribbing in stride, reposting the shower photo to his Instagram stories with a grimacing face emoji added.

Ashlee, who also included a black-and-white photo of her holding hands with her husband of almost seven years, struck a more heartfelt note in the caption, calling Evan the love of her life. “Your spirit is truly infectious, and I’m so lucky to spend everyday with you,” the Pieces of Me singer wrote of her “I Do” collaborator and father of her children Jagger Snow, 6, and Ziggy Blu, 10 months. (She’s also mom to 12-year-old Bronx Mowgli, with ex Pete Wentz.)

Elsewhere, Tracee also shared a more serious social media tribute to her “baby brother” that included five photos taken of the two of them over the years. “How you are 33 is beyond me. I love you soooooo much it’s bananas. Just bananas,” she captioned her post. Their mom, Diana Ross, also celebrated Evan’s birthday on Instagram. “I love you with all my heart,” the iconic “Ain’t No Mountain High Enough” singer wrote. “You are an incredible father and incredible husband and an incredible son and a great friend! You are a gift to me and to the world.”

In March, Evan shared with People that though he considered himself “lucky” to have been able to spend more time with Ashlee and their kids during the COVID-19 pandemic, he missed the moments he might have shared with his extended family, including Diana, Tracee, and sister-in-law Jessica Simpson, who’s mom to Maxwell, 9, Ace, 8, and Birdie, 2.

“The hardest part [has been not] seeing my family that have their own families, and my mother,” he explained. “Because we’re such a close family that we see each other all the time. ... And especially with the new baby, I would love to have our baby around the entire [family]. We get to all be on the family text and that’s special, but the kids miss their cousins.”

If social media is any indication, however, the temporary separation hasn’t taken too much of a toll on the family’s close bonds.