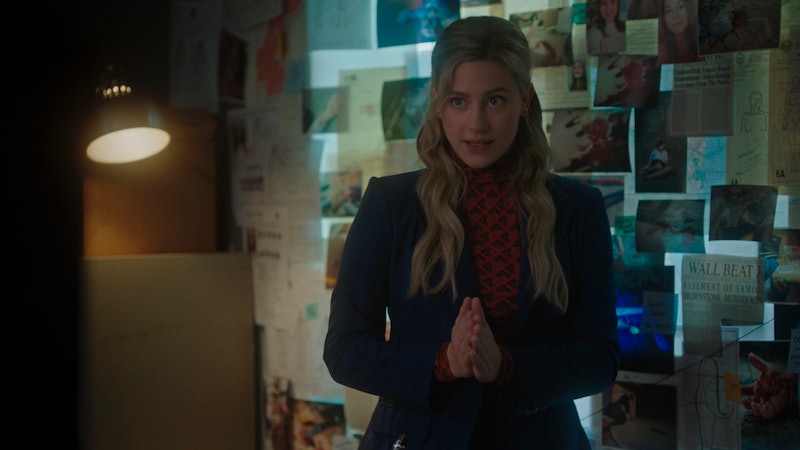 Is there a bigger serial killer magnet than Betty Cooper? In Riverdale's Feb. 10 episode, we learn where she's landed seven years after the long-teased time jump: still hunting murderers, except now as an official FBI trainee instead of an amateur high school sleuth. Apparently, she recently made a rookie mistake: she rushed into a serial killer’s lair without backup on a previous assignment and wound up being held captive by the “Trash Bag Killer” (aka TBK).

As Betty recounts to her therapist, the girl she hoped to save was already dead by the time she got there, so TBK turned his attention to Betty, holding her in a well for two weeks a la Silence of the Lambs before ultimately getting away. “I think about where TBK might be right now,” Betty says in therapy. “I think about the people he might hurt because of me.”

Similar to the way the Black Hood was inspired by the Zodiac Killer, the TBK seems to reference the real Trash Bag Killer, aka Patrick Kearney. He was active between 1965 until 1977 — when he was caught — and may be one of the most prolific serial killers in U.S. history, having admitted to as many as 43 victims. He was dubbed the Trash Bag Killer because his MO involved dismembering remains and disposing of them in varied locations so as to better cover his tracks.

His connection to Riverdale, though, seems to be only by name. Whereas Kearney targeted young (and often gay) men and boys in California, Riverdale's killer goes after young women (at least based on the case files we see Betty reviewing). In the few glimpses we get of him, TBK also appears to be wearing a disguise made out of trash bags, which Kearney never did.

Regardless, it’s not a huge leap to think that TBK will make his way to Riverdale this season, given that Betty is still poring over details from the case as well as piecing together information about a “migrating serial killer." In fact, TBK may already be closer to Riverdale than Betty or the FBI knows. At the end of the episode, a Riverdale resident named Squeaky gets into an ominous looking truck as Jughead's narration tells us she would "never make it" out of town. And considering how bad the rest of Riverdale has gotten, that's likely going to be just one of many problems the gang will face now that they're back home.

More like this
ITV's 'Maternal' Was Inspired By A Very Simple – & Unanswerable – Question
By Maxine Harrison
Ashton Kutcher Wants Danny Masterson “To Be Found Innocent” In Rape Retrial
By Jake Viswanath
'The Queen’s Gambit' Season 2 Tweet Wasn’t From Anya Taylor-Joy
By Mary Kate McGrath, Jack Irvin and Grace Wehniainen
Pamela Anderson's Sons Brandon & Dylan Have Their Own Hollywood Careers
By Arya Roshanian
Get Even More From Bustle — Sign Up For The Newsletter
From hair trends to relationship advice, our daily newsletter has everything you need to sound like a person who’s on TikTok, even if you aren’t.