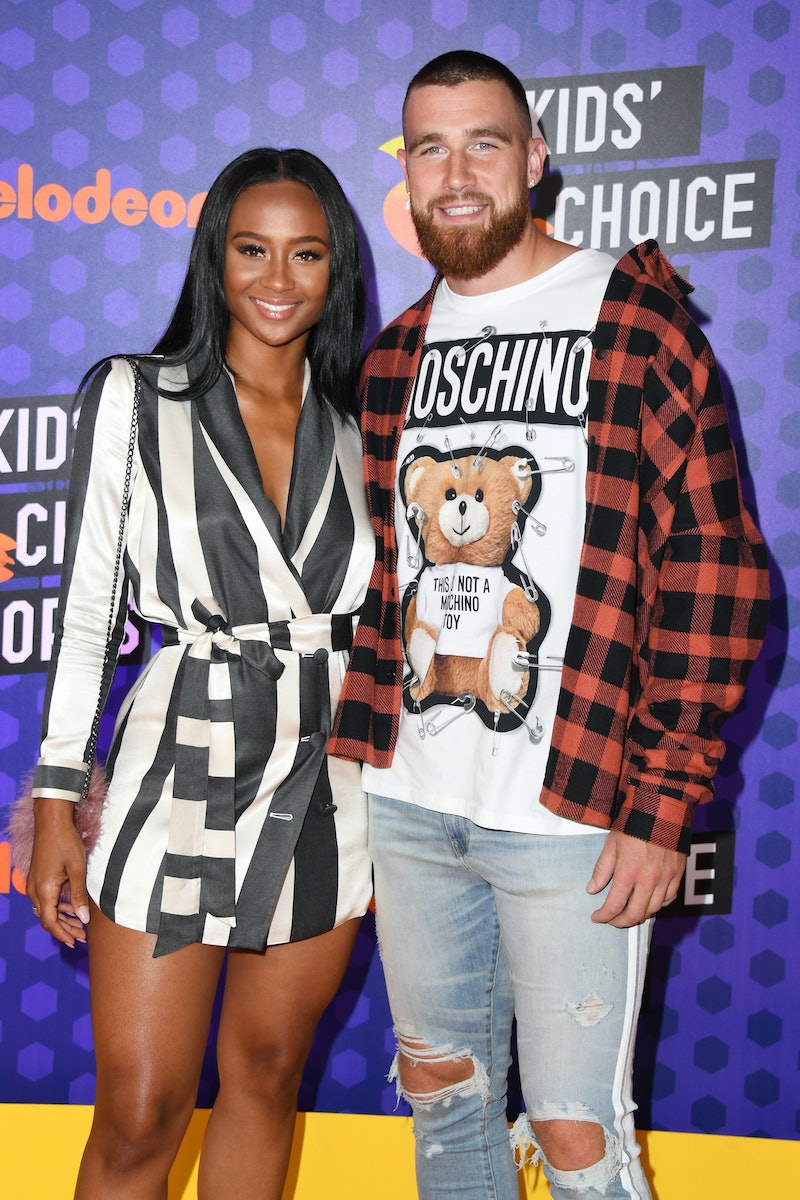 As Kansas City Chiefs tight end Travis Kelce heads to his second consecutive Super Bowl on Feb. 7, his girlfriend, Kayla Nicole, will no doubt be cheering him on. Though the couple reportedly broke up over the summer following cheating rumors, which Kelce vehemently denied, they reconciled before the end of 2020. Nicole's Instagram recently featured sweet snapshots of their holiday together, as well as a congratulatory post when Kelce's team made it to the Super Bowl.

But there's more to Nicole than being linked to Kelce. Her interest in professional sports extends beyond the Chiefs, and she's been actively involved in her own right since her time as an on-air host. Oh, and she has her own modeling and fitness career to boot.

It's unclear exactly how the two met, but a screenshot obtained by a sports gossip website suggests Kelce and Nicole connected on Instagram. Reportedly, she said the pair met after he "Insta stalked" her and she sent him a DM. The rest is history, preserved on the couple's respective accounts. The first time they appeared on each other's timeline was May 22, 2017, with each sharing a different photo.

In March 2020, Kelce gushed about his "lil baby" via a lighthearted caption. He wrote, "She’s the rock to my roll, the passion to my fruit, even the peanut butter to my JELLYTIME... she’s my errrrthang!"

Nicole Is A Model And Media Pro

Nicole's Instagram features photos of her modeling for brands such as Savage X Fenty and FORVR Mood, YouTuber Jackie Aina's self-care brand she describes as a "love letter from Black women, to Black women."

In addition to her modeling work and active Instagram, Nicole has experience working in a variety of on-camera host roles. Her YouTube reel features film press junkets, Kobe Bryant's final game with the Lakers, on-the-street interviews with HotNewHipHop.com, and event coverage with xo Necole.

Fitness Is Her Passion

In addition to exuding confidence with celebrities and in the sports environment, Nicole also applies her natural connection with people to her fitness brand, Strong Is Sexy. On this Instagram, she shares motivational messages and workout videos with a dash of down-to-earth realism.

For example, she begins the caption of one workout post with a relatable "Honesty Hour: I HATED EVERY SECOND OF THIS WORK OUT." On another, she explained that she hopes "seeing me confidently love every version of myself (slimmer/thicker/and everything in-between) will inspire you to love all versions of you too!"

More like this
Romeo Beckham Shared A Sweet Farewell Note From “Proud” Sister Harper
By Sam Ramsden
Jamal Musiala Has The Cutest Nickname Based On A Disney Character
By Catharina Cheung
Jodie Turner-Smith & Joshua Jackson's Relationship Timeline Includes Her Proposing
By Jake Viswanath
J.Lo Wants To Make A Sequel To This Movie With Ben Affleck
By Jake Viswanath
Get Even More From Bustle — Sign Up For The Newsletter