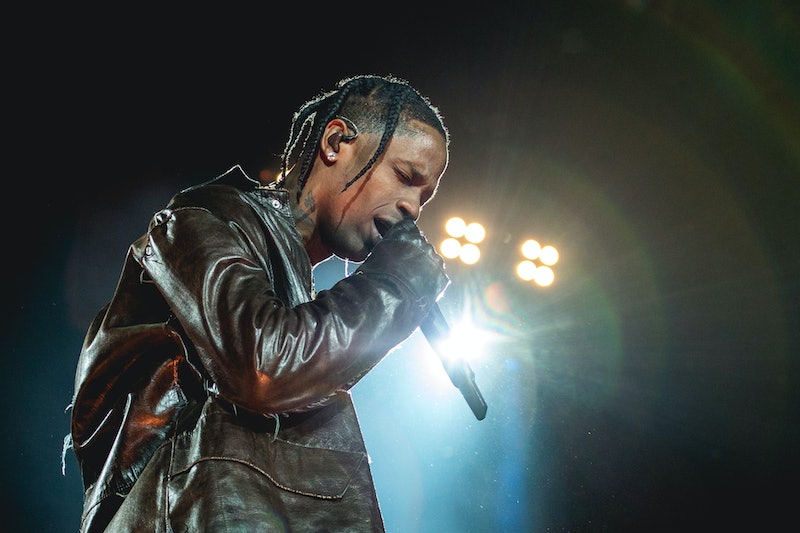 Travis Scott is canceling plans and issuing refunds after the tragedy that took the lives of eight festivalgoers on Friday, Nov. 5, in Houston, Texas. According to Variety, the “SICKO MODE” rapper will no longer perform at the Day N Vegas Festival in Las Vegas on Saturday, Nov. 13, with sources telling the outlet that he’s “too distraught to play” and that he will provide full refunds to those who purchased tickets to Astroworld.

Although details about Friday night’s events are still emerging, what we do know is that eight Astroworld attendees died after a crowd surge at Houston’s NRG Park, ranging in age from 14 to 27. Per Variety, several others in the crowd of 50,000 went into cardiac arrest, hundreds more were injured, and at least one person — a police officer — was stabbed with a hypodermic needle. Per TMZ, the officer was revived on the scene with NARCAN.

TMZ reported that Scott’s camp is cooperating with authorities and that the concert was shut down in a timely manner given the circumstances. But according to The Houston Chronicle, the rapper ran through his entire setlist and finished according to schedule at 10:15 p.m. This was roughly 32 minutes after police and firefighters declared a “mass casualty” event at 9:38 p.m.

The following morning, on Saturday, Nov. 6, Scott issued a statement and said that he was “absolutely devastated by what took place.” “My prayers go out to the families and all those impacted by what happened at Astroworld Festival,” he wrote. “Houston PD has my total support as they continue to look into the tragic loss of life.” He added that he is committed to supporting the families impacted and he also thanked the first responders.

The rapper followed up his statement with a series of Instagram stories. In them, he said that he “could never imagine anything like this just happening” and that he and his team are “working right now to identify the families so we can assist them through this tough time.” He added that he wants all of his fans to have a “positive experience” at his shows and told his followers that he will always stop performing if he “can make out ... anything that’s going on” in the crowd.

“I could just never imagine the severity of the situation,” Scott continued. “We’ve been working closely with everyone to just try to get to the bottom of this — the city of Houston, HPD, fire department, you know, everyone — to help us, help us figure this out. If you have any information, please just contact the local authorities.” He also encouraged his followers to “continue to just keep your prayers.” Kylie Jenner issued a statement on Instagram as well, telling her followers that she and Travis are “broken and devastated.”

Since Friday, several attendees have spoken publicly about what they experienced at the festival. “The crowd was squishing me so much that I felt like I couldn’t breathe,” Emily Munguia told CNN. “I started screaming for help. ... I felt so scared, like I was going to die. … The amount of people I saw get hurt, passed out, bleeding, crying is crazy.” Billy Nasser, another fan in attendance, told The Houston Chronicle that “everyone in the front was getting crushed.”

Of course, this tragedy was not what anyone had anticipated for the return of Astroworld after it was canceled last year due to the COVID-19 pandemic. One week before tickets went on sale in May, Scott expressed his excitement on his Instagram, telling fans he wanted to “RAGE.” Tickets for the event sold out within a day and, evidently, fans showed up to the festival grounds in numbers.

While it remains unclear what the future has in store for Scott’s Astroworld Festival, it’s clear that the rapper won’t be hitting the stage anytime soon. The second day of the festival was canceled in Houston and, as Variety reported, he won’t be performing this weekend in Las Vegas as originally planned. According to the rapper’s website, he has no future dates scheduled at this time.