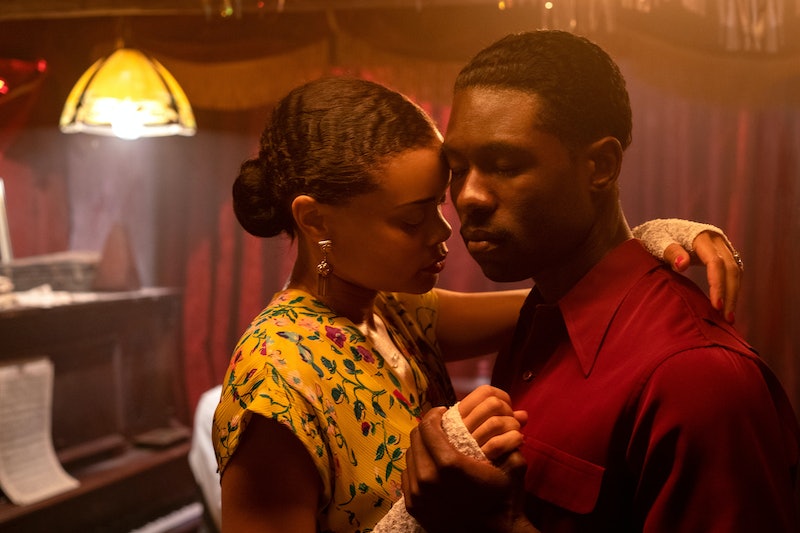 In The United States vs. Billie Holiday, now streaming on Hulu, singer Andra Day plays the iconic jazz and swing singer whose early-career song "Strange Fruit" lit a fire under the world. The film chronicles Holiday's battle with the Federal Bureau of Narcotics, who tried to keep her from singing the song in public in order to keep its subject matter, the lynching of Black Americans, out of the public's ears. To do so, Harry Anslinger, the head of the FBN, hired agent Jimmy Fletcher to infiltrate Holiday's inner circle and use her drug addiction as an excuse to arrest her. But The United States vs. Billie Holiday takes Fletcher and Holiday's relationship to another level.

In the film, Jimmy Fletcher, as played by Moonlight's Trevante Rhodes, does make his way into Holiday's close circle of friends, partying with them and attending her shows, before he reveals his true identity. These elements of the movie are true, as NPR reports, "Jimmy Fletcher's brief was — follow Billie Holiday everywhere she goes; befriend her; document her drug use, and get it ready for an indictment." For more than a year, Fletcher followed Holiday everywhere. "He gets to know her. He dances with her in Harlem nightclubs. He gets to play with her little dog. They get on really well... But Billie Holiday was so amazing that Jimmy Fletcher fell in love with her."

Fletcher's love for Holiday, however, was more speculation than historical fact. The film was inspired by and based upon the chapter, "Black Hand," from British writer Johann Hari’s 2015 New York Times bestseller, Chasing the Scream: The First and Last Days of the War on Drugs. Speaking with NPR, Hari asserts that Fletcher fell in love with Holiday. But as The Guardian writes, "There is something tonally very odd about elevating this imagined love affair to an accepted part of her life, with sensitive G-man dreamboat Fletcher supportively hanging around, following her on tour, and finally entrancing Billie with his gentle and considerate love-making with Billie not minding that he is still working for the Feds."

Indeed, in the film, Fletcher and Holiday's tortured love affair continues after her stint in jail, for which Fletcher was directly responsible, and throughout the rest of her life, leading to The Independent to remark that "Rhodes may be a charismatic actor, but the film never bothers to interrogate the power dynamics at play when a Black man complicit in the oppression of a Black woman simultaneously falls in love with her."

In reality, after Holiday's release, Anslinger moved on from Fletcher and hired a different agent to work on her case, Hari writes in Politico, so the involved romance between Holiday and Fletcher after her jail time was an exaggerated addition to the film. Years later, Hari details, when her own autobiography Lady Sings the Blues was finally published, Holiday tracked Fletcher down and sent him a signed copy. Yet even without the long and tumultuous affair that's presenting in the film, Fletcher did feel remorse for his actions. The Guardian continues: "He later told Holiday’s would-be biographer, Linda Kuehl, in a taped interview in the 1970s that he always regretted the betrayal."