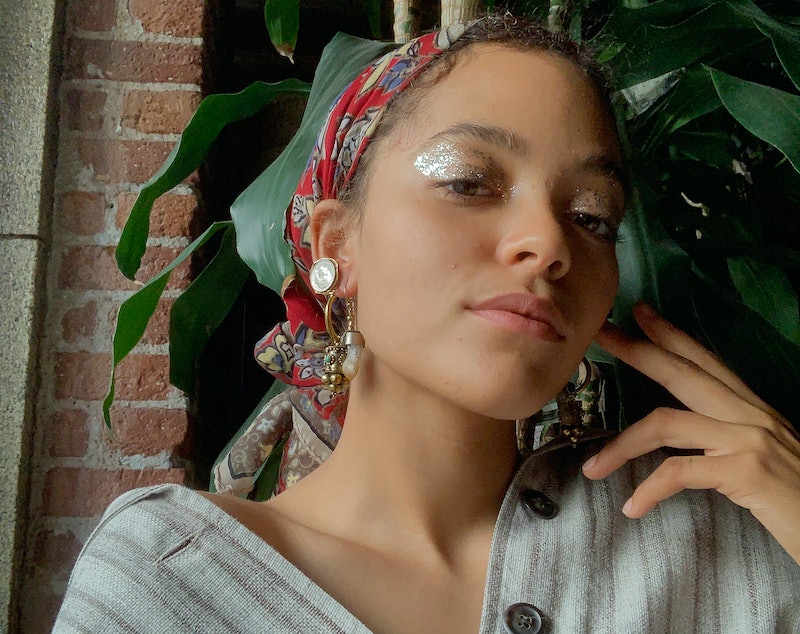 When celebrities (virtually) hang out with Bustle writers, we want to give them the chance to leave their mark. Literally. So we hand them a pen, a piece of paper, a few questions, and ask them to get creative. This time, Trinkets star Quintessa Swindell is leaving their mark in the Bustle Booth.

Growing up as a biracial, non-binary theater kid in Virginia, Quintessa Swindell never imagined playing a role like Trinkets' Tabitha: The character is the kind of wealthy "It" girl typically portrayed by white actors (see: Gossip Girl's Serena van der Woodsen, Mean Girls' Regina George). Even after landing the part, Swindell, who uses they/them pronouns, didn't really see themselves in Tabitha — not only because the character is cisgender, but because she also happens to have a bad habit of shoplifting. Still, the two do have a few things in common: effortlessly cool style, an enviously artsy Instagram, a devotion to speaking out against injustice. And after filming the second and final season of Trinkets, Swindell realized they're more like Tabitha than they'd like to admit. "In the beginning I was like, 'I'm so not her,' but I think in retrospect, there are so many [commonalities],'" Swindell tells Bustle.

This includes a Season 2 scene that was particularly painful to film. Though Tabitha comes from a privileged and wealthy family, that doesn't protect her from the racism directed at her as a Black woman, as exemplified when a store owner racially profiles her while she's shopping with her mom. It's an experience Swindell knows intimately. "When we started filming [the scene], I was like, 'damn, these are still such raw feelings. I still know where this sits in my heart and within my body,'" Swindell says.

More than that, though, Swindell connected with the search for belonging that has always been at the core of Tabitha's story. Though she begins the series as a popular girl more focused on keeping up appearances than expressing her true self, she ultimately finds acceptance in her ex-BFF Moe (Kiana Madeira) and new girl Elodie (Brianna Hildebrand), two misfits she bonds with in Shoplifters Anonymous. Swindell went through a similar journey while navigating her place within the LGBTQ+ communities.

Get to know more about Swindell in their Bustle Booth questionnaire below.