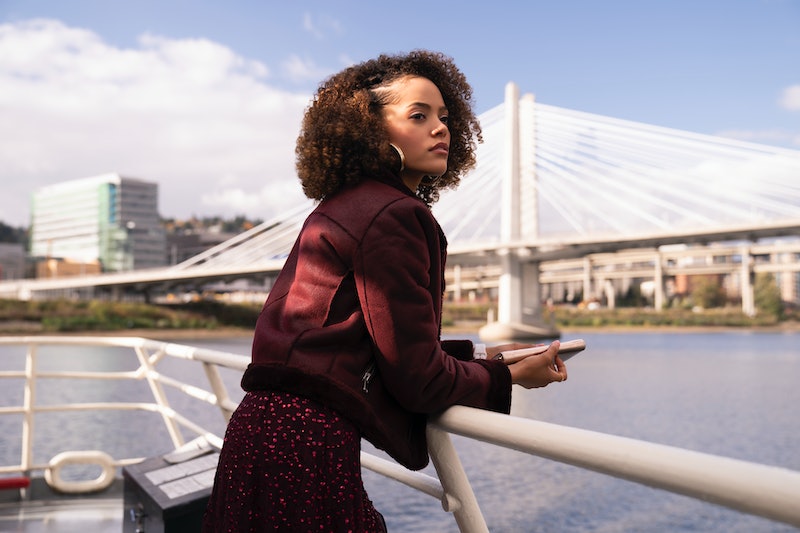 For a show set in high school, Netflix's Trinkets feels awfully grown up — and much of that is due to Quintessa Swindell, who plays Tabitha Foster. Tabitha is the Queen Bee of Lakeshore High School — an It Girl "so pretty she's basically an avatar," with a seemingly perfect life and a secret shoplifting habit. The role marks Swindell's first major acting gig, but it's easy to see why they were cast — they're strikingly beautiful and impossibly cool, the kind of person you couldn't imagine not being popular. Offscreen, though, Swindell offers a very different side to that It Girl persona.

In a recent interview with GLAAD, Swindell opened up about their gender identity and how it plays into their work as an actor. Swindell uses they/them/their pronouns and identifies as non-binary and gender non-conforming. They say that Tabitha, as a "cisgender young femme," is "quite different from [their] personal self," though playing the role was ultimately a deeply personal experience. "One of the more beautiful experiences I had while shooting this season was diving back into past high school experiences and finding strength in many things I had not in the past," Swindell told GLAAD. "I found strength and resilience in fighting for Tabitha."

Swindell believes that "fighting for the underrepresented is both a duty and privilege," and they intend to exercise that duty and privilege in their career. "Without proper representation for queer communities, people who are exploring their identity can be pushed to the side," Swindell explained, emphasizing the "absolute necessity" to push for that representation in film and TV, especially given today's political climate. They hope to see more trans and non-binary roles in the future, so that those underrepresented groups have something to look toward.

"To think that someone, somewhere, struggling with what I have dealt with may see my work and be inspired is the goal of my career," Swindell concludes. Clearly, Swindell is a passionate activist, and their being cast in Trinkets will hopefully raise awareness about the non-binary community.

As for how Swindell spends their free time, here's what we've gleaned from Instagram.

They Have A Boyfriend

They've posted a few photos with their boyfriend, including a February 6 post celebrating their two-year anniversary.

Their dog, Luna, appears rarely — possibly because Swindell just picked up the pup six months ago.

Swindell is shown holding a camera in many posts, but this one is an example of a finished work, displayed at the Into Action exhibition in Los Angeles. In the caption, they write:

"With the help of another photographer- @xoxohadas, we shot within numerous areas of 'Skid Row' and were able to see the many families, women, non-binary, trans folk, children and men all displaced into the manufacturing districts of Los Angeles. It was our first venture into visual work and this is the beautiful lil' piece that came out of it."

They Love To Travel

Some of the travel is definitely work-related (perks of being an actor!), but Swindell's feed is filled with envy-worthy 'grams in far-off places: Thailand, Japan, Austria, Italy, France. "Until next time," they captioned a recent picture in Tokyo.

There are plenty of reasons to watch Trinkets, but Swindell's complexity and maturity as Tabitha is a big one. Swindell is a rising star, and Trinkets just might be their breakout hit.