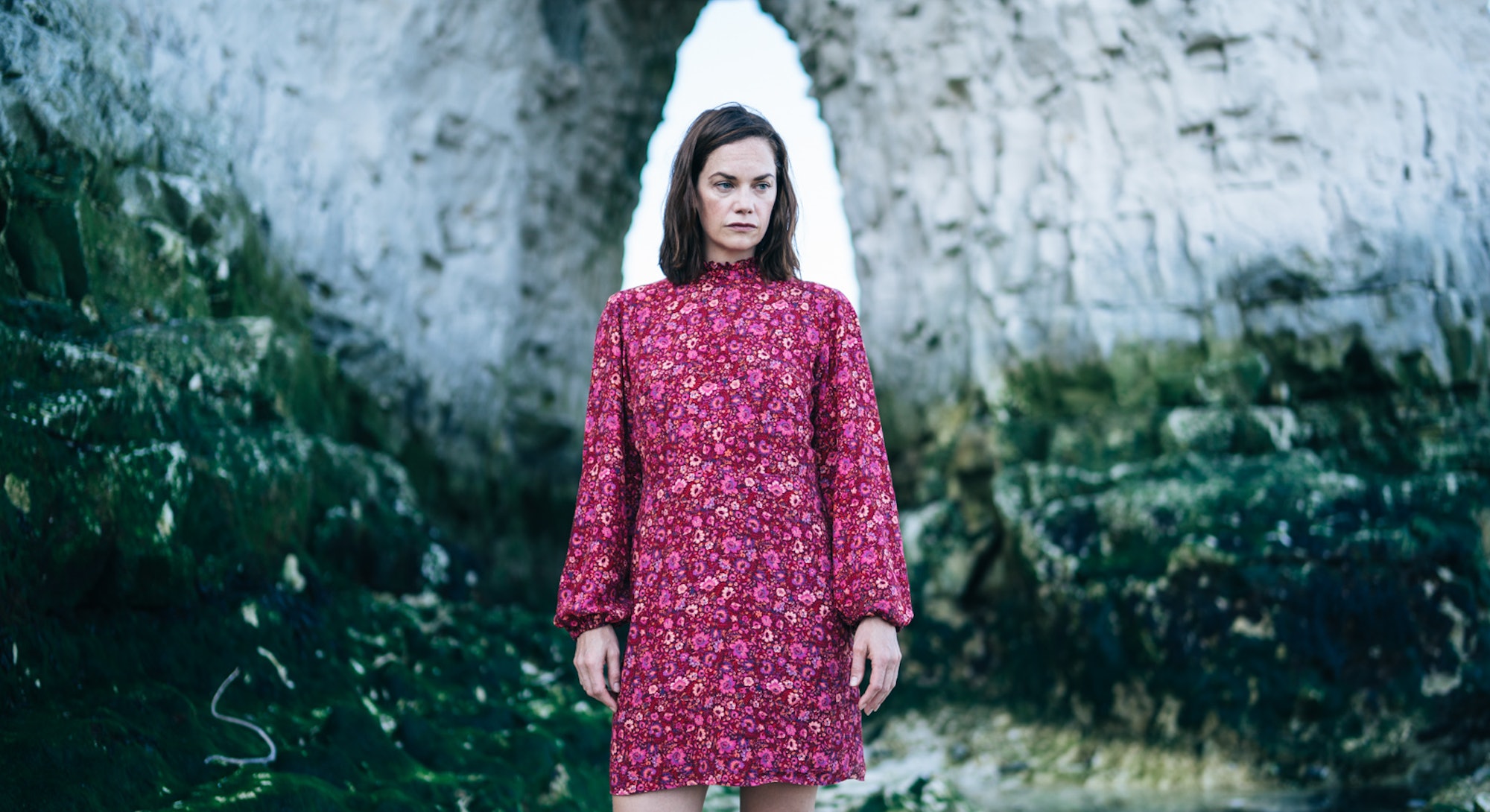 “It was a female experience. He was the object. He’s called ‘Blond’ [because of his hair] and there’s not much else we find out about him,” Ruth Wilson tells me. “It’s through her eyes: her agency, her choices.” The actor is talking about the book True Things About Me by Deborah Kay Davies, which provides the original material for the authentic female experience depicted in her new film.

True Things invites us into the quietly chaotic mind of Kate Perkin (portrayed by Wilson), as she navigates her early 30s. Bored with the mundanity of her day-to-day life — where she spends her hours working at a job centre — Kate is restless and searching for something more. She finds the perfect distraction when Blond (Tom Burke), who is newly-released from prison, sits down at her kiosk in search of assistance. The pair embark on a toxic relationship, of sorts. Kate soon becomes addicted to Blond — or rather, the feeling she gets when she’s with him. That’s the crucial point here, as this story is very much about Kate and her journey, rather than about Blond and his. And while Kate is fraught with contradictions and shortcomings, she’s not shamed for her behaviour. The audience is actively encouraged to follow her journey as an intrigued observer, as opposed to playing the judge and executioner, as we so often are when imperfect [normal] women are portrayed on-screen.

During a luncheon held by the film’s lead actress and its director, Harry Wootliff, at London Piccadilly’s Picturehouse Central for a select group of editors, Wilson praises the story’s focus on Kate, and is keen to steer away from the archetypical “messy woman” narrative. “Is she messy? I just feel she’s quite normal, really,” Wilson muses. ”It’s not a caricature of a messy woman, it’s far more complex. Kate seems passive, but underneath, she’s actually quite driven.”

Alongside Wilson and Wootliff, director of photography, Ashley Connor, played an integral role in ensuring Kate’s story is told through the female gaze — and an authentic one, at that. There are everyday occurrences that would have no doubt been presented entirely differently, had a man been at the helm of the project. For instance, whilst getting ready for her date night, Kate shaves her bikini line in the bathtub. It’s an entirely common happening, and is treated as such. There are no sexy silks or razors that cost a ridiculous amount and come with their own leather case. There’s nothing fancy about it: just a woman leaning over (somewhat uncomfortably, no doubt) and tending to some personal grooming with a high street-bought plastic razor. Of the fleeting, yet expertly-executed, scene, Wilson says: “There was a shorthand with the intimate moments. It didn’t feel in any way objectionable. It felt honest, even in the space of doing it.”

Kate’s friend calls her a ‘sl*t’, but why can’t you go into a car park and have sex with someone, if you want to? A man would not get judged for that or called a sl*t.

At times — through much of the film, in fact — I felt uncomfortable and somewhat on-edge, purely out of concern for Kate. In search of reaching her next emotional and physical high, she’s often reckless with her own safety. And while nothing particularly bad happens to her, you can’t help but worry that it will. After her brief, flirtatious meeting with job-hunter Blond, she exits work to find he’s waiting outside for her. Despite not knowing anything about him, she agrees to follow him and gets in his car. The pair drive to a high-rise car park and have sex against the wall. It’s Kate’s first taste of the exhilaration she’s been yearning for, and she’s soon hooked. However, her desire for sex and female pleasure is not itself presented in a negative way, nor is the efforts that Kate goes to in order to keep Blond around. Of the character’s sexual liberation, Wootliff notes: “Kate’s friend calls her a ‘sl*t’, but why can’t you go into a car park and have sex with someone, if you want to? It’s exciting and fun. A man would not get judged for that or called a sl*t.”

Sex is presented without apology or explanation in True Things. Kate enjoys both real and imagined sexual encounters with Blond, as well as instances of self-pleasure. Wootliff went to great lengths to make each encounter different, and was keen to not show incessant close-ups of the naked human body. “We’re bored of seeing flesh on the TV,” she states, noting that it’s not a necessary requirement when depicting scenes of a romantic nature. In agreement, Wilson celebrates the sensual aspect of the story. “It’s all about how she [Kate] feels in her mind, and how it makes her body feel. In the sex scenes, you want to get into the intimacy, which isn’t necessarily an observational look.”

Kate and Blond’s relationship — or entanglement, if you will — has extreme highs and lows. Although he can, at times, appear gentle, he soon switches back to a coarse exterior. He’s dismissive of her feelings, and makes empty promises, such as calling her his “soulmate” when drunk, only to brush it off the next day. One disappointing encounter takes place the morning after Blond spends the night with Kate. He awakes early, and asks to borrow her car. While she says yes, she’s eager to keep him there for as long as possible, but he’s unimpressed by her empty fridge. In an effort to please, she goes on a manic trip to the shops, hurriedly buying the ingredients for his breakfast. She returns, only to find Blond and her car are gone. He’s left a note, though: “Had to run. See you!” It’s the 2022 equivalent to Jack Berger’s “I’m sorry. I can’t. Don’t hate me.” While in Sex And The City, Carrie Bradshaw responds by knocking over a vase, spilling flowers and water across her apartment floor, Kate’s response is more reserved. She crumbles internally, at first, before the cracks appear to show on the outside, too.

I am always of the mind that it’s not victims and perpetrators. Everyone has a responsibility for their involvement in relationships and how they work. It’s understanding why you choose to take part and accepting it’s happened.

From making throwaway comments about her shoes (“Horrible, aren’t they?”) to keeping her car for a week, Blond’s treatment of Kate goes from bad to worse. At one point he leaves her crying and alone in a pub, having rejected her for being “too f*cking much.” However, in search of that seemingly unattainable high, she keeps going back for more. Why? You may find yourself wondering. To this, Wootliff references the prevailing narrative of rationing female pleasure. “There’s the sense that deep down, what he’s giving her is good enough. People settle for that,” she remarks. “We’re thinking, ‘Oh this is great. It’s what I’m allowed. You can’t have everything, that would be too much.’”

Much like Kate (and all of us, really), Blond is damaged and has his own demons to deal with. No one in this story is presented in such linear terms as “good” or “bad.” Everyone is multifaceted and flawed. “I am always of the mind that it’s not victims and perpetrators. Everyone has a responsibility for their involvement in relationships and how they work,” notes Wilson. “It’s understanding why you choose to take part and accepting it’s happened.” Revealing she was asked by Wootliff to remain non-judgemental of the story, the actor adds: “I’ve been both Blond and Kate. I’ve had experiences and feelings like theirs.”

Kate and Blond have one last hurrah when, after they’ve taken some time apart, he texts her to say that he has booked her a ticket to fly out to Spain for his sister’s wedding. She drops everything and goes to him, as she tends to do, yet something is different this time. The veil has lifted, and Kate is able to see Blond for who he really is — or rather, what it is that he represents to her: an addictive habit that she needs to quit. After walking out of the wedding party, Kate wanders the streets alone, before entering a nightclub. She heads to the dancefloor and dances her stresses out: it’s a liberating moment. The next morning, Kate packs her things and leaves Blond a note of her own. “Had to run. See you!” she writes. We’ve come full circle. Our last glimpse of Kate shows her departing in a car, with the window rolled down, the sun beaming on her face, and the open road in front of her. Having found herself once more, she’s untethered. Alluding to the possibilities ahead, Wilson concludes: “We leave it open as to where she goes next.”