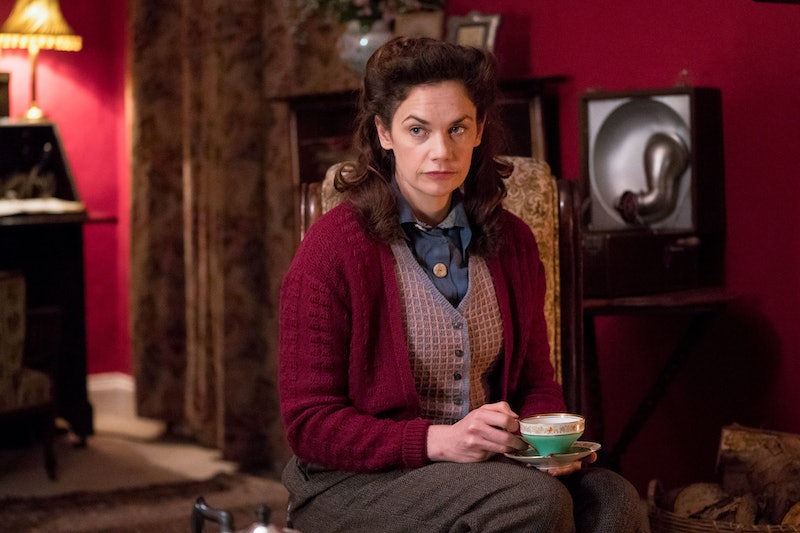 Every family has skeletons in its closet but Ruth Wilson's are more incredible than most. The actor, who plays her real-life grandmother Alison in BBC's Mrs Wilson has brought the family’s darkest period to light in a series tinged with drama, betrayal, and a serious amount of affection for her “granny.” It’s a programme that presents more questions than answers and even now decades on, Wilson still doesn’t quite know what to make of it all as we chat on the phone.

She explains, "If you are a family that live in secret and don't ask questions, you feel that generationally. That kind of energy is passed down."

It seems like the family's mysteries will finally stop with Ruth, however. She called the new mini-series based on Alison’s memoirs a “sharing of those secrets,” but it all started back when her grandmother Alison told the tale of her unbelievable life: one that she didn’t share with the rest of the family until Ruth was 15 and Alison’s children were in their 50s and 60s. Before then, Ruth explained, her grandfather Alexander ‘Alec’ Wilson (played by Game of Thrones' Iain Glen) was a kind of shadow that hung over their family. He was a figure she knew existed, but they had “no photos of him,” and there was “no reference to him at all.”

She explained that Alec's son, her father Nigel Wilson, who is played by Otto Farrant in the series, "never mentioned him" growing up.

As viewers will see in the show, Alison’s life was turned upside down when her husband Alec died suddenly of a heart attack — a relatively quiet end for a former Secret Service agent. In the aftermath, she discovered that Alec was not the man she thought she knew. Not only was his past with MI6 far more complex than she was led to believe, he was also a bigamist married to three other women. Throughout the show, Alison pulls on every thread she can find to get to the bottom of things: trying to find out which marriages were part of his job, where she fit into his life and what it all means for her and her two sons.

Alec's first and only legal marriage was to Gladys Wilson, followed by actor Dorothy Wick — and according to Ruth, the family "do feel that Dorothy probably was a cover wife" as part of his work in India — then Ruth's grandmother Alison McKelvie, and finally Elizabeth Hill. Ruth tells me that as Alec was a Catholic man he "couldn't get a divorce" at that time, but she did also add that "you don't have to keep on marrying people." As the Express reports he had seven children in total.

Although there’s undoubtedly a ton of intrigue around who Alec really is, the show finds its heart in Ruth’s vulnerable performance as Alison. The actor's grandmother sadly passed away when Ruth was 22, seven years after she shared her story with the family. But Wilson says that “getting to live and breathe her for nine weeks” while filming the programme brought her closer to her grandmother.

“I only ever knew my grandmother really how you see her in the last third of the [final] episode...The woman before that I had to kind of conjure up and imagine from the first part of her memoir, and from her poetry, and what we found out about her life with Alec,” she reveals.

“[It brought] a huge understanding and empathy for this woman. And for what she went through, and for what my father went through and my uncle, and other family members,” she continues.

This definitely shines through in the series, it's impossible not to fall in love with Alison, who you come to champion in spite of her flaws for her resilience and fierce love for her family. The show, which chronicles different periods of Alison and Alec's lives leading up to his death in the 1960s, would have been a challenge for any actor — but there were certain scenes that left Ruth feeling particularly "disempowered" while filming.

"I found all of the '60s really hard and part of me was... it was just such a disempowering part of her character. She was constantly looking for truth, but was being told and smacked by life time and time again and I was just like, 'How did she deal with this?'" she said.

Even in just trying to describe the experience, Ruth struggles to find the words but explains, "She's trying to hold on so she doesn't go to ground zero and I found that really hard to play. I found it really disempowering weirdly and it was like an adrenaline was going through my veins during those scenes that I couldn't control. It was really weird and I was breathless a lot, you can sort of see it [on screen] — my neck's tensed all the time."

Nowhere in the series is this more apparent than in the season finale where Alison is brought to her lowest point. The realisation that Alison never really managed to tie up all the loose ends and that her descendants are still out "banging on the doors of the Secret Service and trying to get some answers out of them," is particularly sobering.

But with the show now out, bringing with it renewed publicity for her family's plight, there is hope that Mrs. Wilson will open some doors.

"[Writer] Tim Crook, who did exhaustive research on my grandfather and is continuing to try and find out more information, keeps pursuing [the Secret Service] in light of this drama. You know, it's public domain now and in the public interest," Ruth says.

"We want to know why [Alec] was sacked and what he got up to and any details, records, things [the Secret Service] have. But they have continued to say it's case sensitive, but they haven't gotten back yet obviously but we will keep pursuing," Ruth tells me. "I don't know what will happen."

All of this might lead you to think that the ending of Mrs Wilson can't be particularly inspiring. But you'd be completely wrong — without spoiling it — Alison ends up finding peace in a way that Ruth describes as "all part of her journey." The church has a great deal to do with it, something that Ruth knows might not go resonate with all viewers.

"[Alison] did have this extraordinary religious experience, which was going to be really hard to put on screen and I think probably people won't get in this day and age. And even back then. And some people might interpret it as a breakdown: it was in a way, but it was her form of salvation or whatever happened. Whatever happened, she found survival," Ruth explains.

And with survival came healing, as eventually Alison found "this place of peace and this place of forgiveness" which Ruth believes allowed her grandmother to eventually share her story with the family. It goes beyond that as well as eventually, it allowed all the different strings of the family to eventually find one another and close the crevasse that the secret-keeping left behind.

"Through that, all my family have met each other and been able to kind of unite in their experience over what they all shared even if they were disparate and separate all over the country," she told me.

If anything, that sounds like what Alison would have wanted. One of the things that Ruth told me that has continued to stick in my mind is that in spite of all her suffering, her grandmother still believed in love stories.

The third and final episode of Mrs Wilson will air Tuesday, Dec. 11 on BBC One at 9 p.m. and previous episodes can be watched on BBC iPlayer.