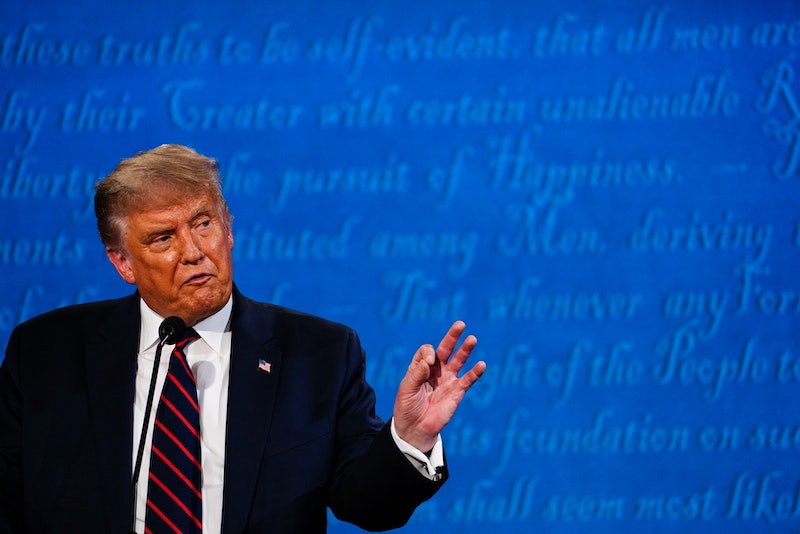 The American people may finally be getting their wish: a presidential debate with a mute button. In the wake of the president's coronavirus diagnosis, Variety reported on Oct. 8 that the second presidential debate between Donald Trump and Joe Biden will be "virtual," with the two candidates debating from different locations. The debate's moderator, Steve Scully, and citizens who have been chosen to participate in the Town Hall-style discussion will ask questions from the original location in Miami, Florida on Oct. 15. Trump, however, is now saying he'll host a rally instead.

According to the Commission on Presidential Debates, the new measures were put in place "to protect the health and safety of all involved with the second presidential debate," after Trump, First Lady Melania, and many of the president's inner circle tested positive for COVID-19. The administration has been vague about Trump's current condition, causing fear that the next debate might be another superspreader event. Despite being hospitalized at Walter Reed Medical Center, on Oct. 6, Trump wrote on Twitter that he was "looking forward" to the debate and that it "will be great!" But once plans for a virtual debate were announced two days later, the president told Fox Business that he would no longer participate in the event.

"I’m not going to waste my time on virtual debate. That’s not what debating is all about," Trump said, per Politico. "You sit behind a computer and do a debate. It’s ridiculous, and then they cut you off whenever they want." Instead, Trump's campaign manager Bill Stepien released a statement announcing plans for Trump to host a rally, claiming that the Commission is using his COVID diagnosis as an excuse to avoid "see[ing] both candidates go head to head."

In the wake of Trump's diagnosis and hospitalization, Democratic candidate Biden has expressed his reluctance to take part in an in-person debate, due to health concerns. "I think if he still has Covid, we shouldn’t have a debate," Biden told reporters on Oct. 6, according to Politico. "We’re going to have to follow very strict guidelines. Too many people have been infected. It’s a very serious problem."

His concerns are not unfounded. Stepien claimed that Trump "will have posted" multiple negative COVID tests results by the time Oct. 15 rolls around, the White House hasn't released a definitive timeline of the president's coronavirus tests or contact tracing efforts, despite "more than a dozen members of Trump's circle" testing positive for the virus, according to CNN. Moreover, there are some who doubt whether or not Trump had actually tested negative before attending the first debate, causing concern for Biden and Kamala Harris. A virtual debate would certainly ensure everyone's safety, and it might also give Americans a chance to actually hear what the candidates are saying.

The first 2020 presidential debate was extremely contentious, with Democrats criticizing the president for constantly interrupting both Biden and moderator Chris Wallace throughout the night. Many watching at home expressed a desire for some kind of "mute" button to be implemented in the next debate, in order to keep the candidates from talking over one another.

Once the plans for the "virtual" debate were announced on Oct. 8, many of them echoed those sentiments on social media:

Biden has not yet commented on the virtual debate, or on Trump's plans to host a rally instead of participating. It is also unclear whether or not the Commission will implement further changes to the third presidential debate as well, which is currently scheduled to take place on Oct. 22, and was planned to feature the same structure as the first — very controversial — debate.