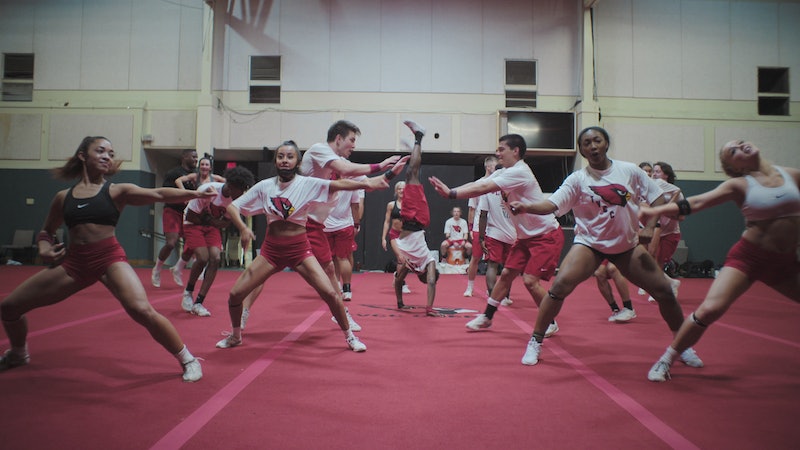 Located in Athens, Texas, the school is less than an hour away from Navarro’s home in Corsicana. They’ve won 12 national titles throughout their history as a team, but lost the national championship to Navarro in 2019. Season 2 sees them gunning for redemption as they prep for their biggest event of the year: the NCA & NDA Collegiate Cheer & Dance Championship in Daytona, Florida.

Here’s everything else to know about the new competitors you’ll see on the mat.

Like Navarro, Trinity Valley Community College attracts a number of incredibly talented athletes, and Cheer Season 2 spotlights a handful of TVCC cheerleaders. The most well-known person on the squad is Angel Rice, a former member of the USA gymnastics team who set a Guinness world record at the age of 16 for the most double full twists performed in one minute. Many call Rice “the Simone Biles of cheerleading,” and she’s known as one of the best tumblers in cheer. It might be a bit surprising to find Rice at TVCC, if not for the fact that her brother Jaden “Jaymo” Rice is also a tumbler on the team.

Another TVCC cheerleader featured in Season 2 of Cheer is Devonte “Dee” Joseph, a newcomer to the team known for his unreal tumbling skills. Joseph can perform a quint — aka a flip with five turns that is so difficult it’s actually illegal to perform at the NCA National Championships. Prior to coming to TVCC, Joseph trained at a gym alongside the Rice siblings and was actually recruited by Navarro before deciding to go to TVCC instead. Additionally, Cheer Season 2 follows tumbler and flyer Jada Wooten, stunter and tumbler Jeron Hazelwood, and tumbler Ben “Benji” Chester — all new members of the TVCC squad.

Trinity Valley Community College’s cheer coach has had a pretty impressive athletic career — not just as a cheerleader, but also as a high school football player. Before transitioning into coaching, Johnson was a member of the Team USA cheerleading squad himself, so he’s acutely familiar with what it’s like to compete on the mat. He also attended TVCC.