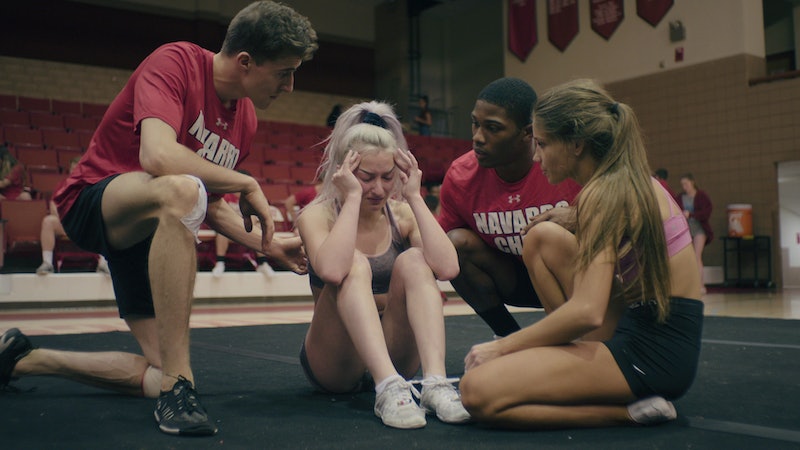 Season 1 concluded just months prior to the NCA National Championships, which were set to occur in early April 2020 but canceled due to the onset of the COVID-19 pandemic, devastating both the cheerleaders and supportive Cheer viewers. Later in September 2020, former fan-favorite cast member Harris was arrested and charged by the Federal Bureau of Investigation with one count of production of child pornography. In December 2020, Harris was charged with seven additional counts, four of which NBC News reported were related to “using, persuading, inducing, and enticing a minor ‘to engage in sexually explicit conduct for the purpose of producing a visual depiction of such conduct.’” While Harris allegedly admitted to committing some of the crimes in conversation with authorities, he pleaded not guilty to the charges, and his spokespeople have denied the accusations.

Netflix just released the first trailer for the docuseries’ next installment, which is set to focus on the team’s rising fame and upended Daytona trip as well as Harris’ criminal charges. Here’s everything to know about Cheer Season 2, including its plot, cast, trailer, and release date.

Netflix unveiled the first official trailer for Cheer Season 2 on Dec. 28. Alongside its release, the streaming service revealed the nine-episode season will premiere Jan. 12, though it’s unclear how many episodes will drop at a time.

Season 2 of Cheer finds the series’ stars adjusting to their famous new lives following Season 1’s monstrous popularity. However, the series’ seemingly linear narrative shifts as the NCA National Championships are canceled and the team must figure out its next move. To make matters more difficult, Harris’ allegations come into play, complicating the cheerleaders’ relationships as well as the team’s lineup and structure.

While Season 1 only focused on the Bulldogs, this installment will introduce viewers to Trinity Valley Community College’s cheerleading team in Athens, Texas — aka Navarro’s most aggressive rival. With a charming coach and teammates with captivating backstories, the cheerleaders of Trinity Valley are sure to bring some serious competition to the mat.

Netflix’s synopsis describes Season 2 as such:

The Emmy-winning breakout sensation is back and the stakes have never been higher. As Season 2 opens and the buzz around their newfound stardom threatens to alter the dynamic of Navarro Cheer, the team finds no amount of press frenzy could compare to the challenges they must face when COVID-19 upends the 2020 cheer season and a serious criminal accusation is levied at one of their teammates. Against that dramatic backdrop, the 9-episode season expands to showcase Navarro’s fiercest rival: Trinity Valley Community College. As with the Navarro team, TVCC has a charismatic coach and breakout stars whose struggles, triumphs and stories extend far beyond the mat. As both teams push for the 2021 championship in Daytona, familiar faces take compelling detours and new contenders make a name for themselves.

Expected to return to Cheer for Season 2 are Aldama, Butler, Simianer, Brumback, Marshall, Mackenzie Sherburn, and Shannon Woolsey. While he hasn’t been officially ousted from the cast, it’s unlikely Harris will make an appearance in the new episodes following his criminal charges. In addition to the familiar faces, prepare to meet many new cheerleaders from Trinity Valley’s team.

“The new episodes also tackle extremely difficult moments, including the impact of COVID-19 and criminal charges against one of Navarro’s former team members,” director and executive producer Greg Whiteley said in a statement. “It was inspiring, heartbreaking, sometimes frustrating, and ultimately moving to be a part of their lives. Flying home from our last day of shooting in Daytona, I thought, ‘I cannot believe we saw what we just saw, we experienced what we just experienced.’ If we do our job right, we're able to take the audience on that same ride.”