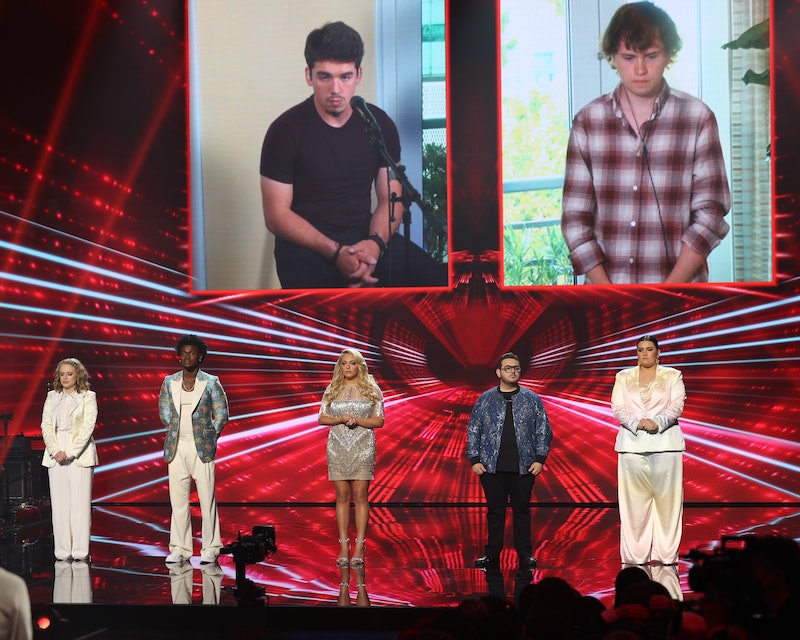 Not even a mother’s touch could make American Idol run without any hiccups on Mother’s Day — but at least Katy Perry didn’t fall on her chair again. On May 8, the Top 7 contestants each performed twice, but two of them couldn’t step on stage after testing positive for COVID-19. First, the singers gave their rendition of a viral TikTok hit, before getting a little more sentimental for their second performance by dedicating a song to their maternal figures for Mother’s Day.

Highlights from the evening included HunterGirl’s performance of Tate McRae’s viral hit “You Broke Me First,” Jay’s heartwarming tribute to his mother, and Fritz Hager doing an original song for his grandmother. But at the end of the night, their knockout performances weren’t enough for all of them to make it to the Top 5. See who made into the Top 5 at the bottom of this story.

Noah Thompson and Fritz Hager tested positive for COVID-19 before the live episode, meaning they couldn’t perform on the American Idol stage like usual. But of course, the show must go on. Hager only started feeling symptoms hours before the live show, so his rehearsal footage was shown, and he appeared via satellite to hear the judges’ comments. Thompson had gotten sick days prior, so he was feeling well enough to perform live from his hotel room.

Luckily, even coronavirus couldn’t keep these performers down. Thompson received rave reviews from both the judges and Twitter for his version of Fleetwood Mac’s oft-covered “Landslide,” which he dedicated to his grandmother. “I’m not going to wish you any bad luck, but when you’re sick, you’re sound a lot better,” Lionel Richie quipped, which Perry agreed with. “You did the best that you’ve ever done tonight,” she said. Spoiler alert: Both contestants made it to the Top 5.

All but one contestant gave their best rendition of a viral TikTok hit, highlighting TikTok’s impact on the music industry. These are the hits they each tackled:

Can a song go viral on TikTok if no one’s actually heard it? For Hager, who chose a new original song, “All My Friends,” for his viral TikTok hit, the answer is yes. Perhaps he was manifesting that the song would go viral after his performance, and if the judges’ reaction were any consideration, it just might happen. “You just got all the tools,” Luke Bryan gushed. “You’ve got the creativeness to go a long way.”

In a more sentimental move, Hager also chose an original song for Mother’s Day, surprising his mom with “The Ocean,” a song he wrote about his grandmother, which made both the judges and Twitter a little teary-eyed. “I think that was one of the most beautiful songs I’ve ever heard about grandma in general,” Perry said. “You continue to shock me and blow me away.”

COVID-19 didn’t stop Thompson or Hager from making the Top 5. The contestants who joined Thompson and Hager in the Top 5 are Nicolina, Leah Marlene, and HunterGirl. That means Christian Guardino and Jay were eliminated from the competition, which did not please Twitter, who felt they were more deserving over some remaining contestants.

The Top 5 performs live on May 15, when the finalists will also be announced.

More like this
Twitter Is Upset About The 'American Idol' Top 3 Results: "Who TF Is Voting?"
By Jake Viswanath
Oops! Katy Perry Fell During 'American' Idol & Twitter Loved How She Reacted
By Jake Viswanath
G Flip Shared How They Got Romantic With Chrishell Stause & Discussed Babies
By Brad Witter
Kim Kardashian & Pete Davidson’s 1st Red Carpet Together Got A Big Reaction
By Stephanie Topacio Long
Get Even More From Bustle — Sign Up For The Newsletter