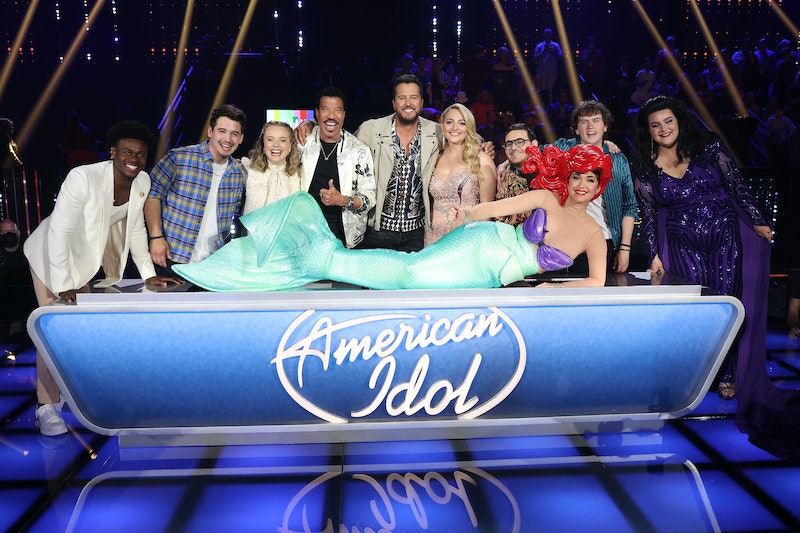 It’s the most magical night of the year — no, not the Met Gala. American Idol had its annual Disney Night on the May 1 episode, where the Top 10 contestants took on Disney classics and Katy Perry stunned with another extravagant costume inspired by The Little Mermaid. After dressing as Ursula in 2019, Perry took on Ariel this year, which didn’t work out as well for the “Firework” singer after her impeccable costume let her down — literally — resulting in a viral fall.

Highlights from Disney Night included Jay’s performance of “Remember Me” from Coco, Fritz Hager’s rendition of “Go The Distance” from Hercules, and Christian Guardino’s version of “Circle of Life” from The Lion King. But in the end, even tried and true Disney classics couldn’t save three contestants who had to be eliminated so Idol could determine its Top 7. Scroll to the bottom to see if Jay, Frtiz, and Christian made it to the Top 7 for Season 20.

Here are three of the standout moments from the May 1 episode that lit up Twitter.

Perry delivered on the costume front as per usual, arriving to the judges table dressed as Ariel from The Little Mermaid, complete with a full-on mermaid tail, meaning she had to be wheeled out by her co-judges Lionel Richie and Luke Bryan. But just as Ryan Seacrest started introducing the Top 10, Perry’s tail let her down when her entire chair toppled over. Richie and Bryan couldn’t stop laughing, but Perry recovered like a champ, giving her best pageant wave as the three men hoisted her back into the chair. Just like the judges, Twitter couldn’t stop laughing either.

The Top 10 Sings About “Bruno”

To kick off Disney Night, the Top 10 contestants performed “We Don’t Talk About Bruno” from the Oscar-winning film Encanto, and they weren’t the only singing about Bruno. Actors Adassa, who voices Dolores, and Rhenzy Feliz, who voices Camilo, joined the contestants to perform their parts on the viral hit. Twitter absolutely loved the number, with some fans even calling it better than the Oscars performance as it stayed more true to the original song.

Someone had to match Katy’s impeccable Ariel, and Nicolina was up to the task. The 18-year-old singer took on Ariel’s arch nemesis Ursula and performed her signature song “Poor Unfortunate Souls,” making history as the first Idol contestant to sing a Disney villain’s song. Perry played her part perfectly, acting terrified as Ursula was belting, before calling Nicolina’s performance the best of the night. “I think you stole the show,” the judge commented. “I mean, that is how you do it. That’s how you do show business, the entrance, the look.” And Twitter was in agreement.

Sadly, Lady K didn’t make it far after performing “How Far I’ll Go” from Moana. Joining her as eliminated contestants were Emyrson Flora, who sang “Carried Me With You” from Onward, and Mike Parker, who dedicated his performance of Tarzan’s “You’ll Be in My Heart” to his mother, who is battling leukemia.

The contestants who made it into the Top 7 are Nicolina, Jay, Christian Guardino, Fritz Hager, Leah Marlene, Huntergirl, and Noah Thompson.

More like this
Twitter Is Upset About The 'American Idol' Top 3 Results: "Who TF Is Voting?"
By Jake Viswanath
How 2 'American Idol' Singers Performed With COVID-19 & Made It Into The Top 5
By Jake Viswanath
Kourtney & Travis Crashed His Daughter’s TikTok Live In Their 2nd Wedding Outfits
By Grace Wehniainen
G Flip Shared How They Got Romantic With Chrishell Stause & Discussed Babies
By Brad Witter
Get Even More From Bustle — Sign Up For The Newsletter