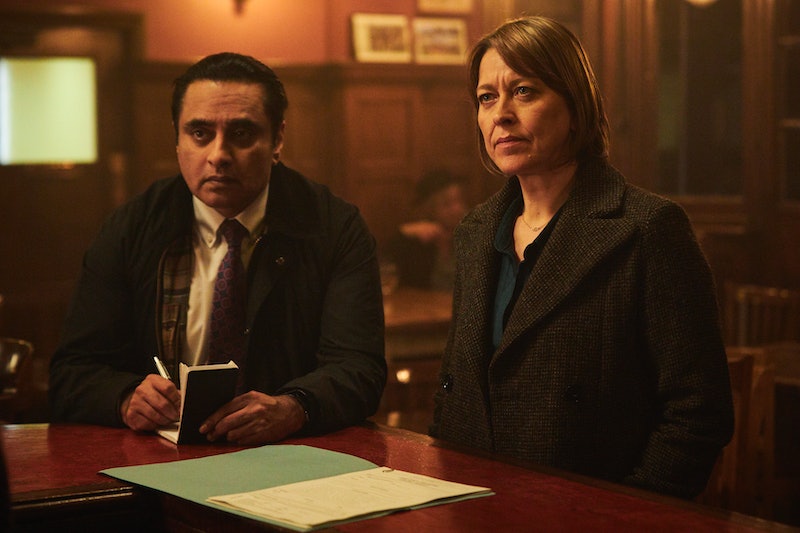 Nicola Walker and Sanjeev Bhaskar are set to reprise their roles as two London detectives on a mission to solve cold cases of disappearance and murder in the fourth series of ITV's Unforgotten. The crime drama last graced our screens back in 2018, and forthcoming episodes were unfortunately delayed due to the coronavirus pandemic. But when is Unforgotten series 4 on TV, you ask? Here's everything to know about the new season.

Per Radio Times, the fourth series of ITV's Unforgotten will begin airing on Monday, Feb. 22 at 9 p.m. on ITV. Following a pause in production sparked by the COVID-19 pandemic, filming for the new season eventually resumed in Sept. 2020. A post shared at the time by the official Unforgotten Twitter account read: "We’re back! Unforgotten will return to your screens in 2021 on ITV!"

In a recent interview, series creator Chris Lang commented on the production delay, revealing the filming of season 4 was almost fully complete before the first national lockdown. "When lockdown happened, we were eleven weeks into shooting and just four weeks shy of completing principal photography. So near and yet so far." Thankfully, the ITV crime drama is now back for a brand new six-episode run, which will see DCI Cassie Stuart and DI Sunny Khan attempt to solve the murder of Millwall Football Club supporter Matthew Walsh, whose body is finally discovered in a scrap metal yard after going missing in the '90s.

Speaking ahead of the new series, Unforgotten creator Lang expressed his excitement at being able to work alongside an "astonishing" cast.

"I am so excited to be bringing back the Unforgotten team for a fourth series, as Cassie and Sunny take on perhaps their most challenging case to date." He continued: "Once again, we have assembled an astonishing cast, and I cannot wait to see how the very finest actors of their generation, start bringing my characters to life."

More like this
Everything To Know About The 'Daisy Jones & The Six' TV Series
By Maxine Harrison and Brad Witter
'The Last Of Us' Has Officially Been Renewed For Season 2
By Darshita Goyal
'Boiling Point's TV Sequel Is Set To Deliver A “Rollercoaster Of Emotions”
By Catharina Cheung and Sophie McEvoy
'Happy Valley' Recreated This Moment From S1 In Its Penultimate Episode
By Sophie McEvoy
Get The Very Best Of Bustle/UK
Sign up for Bustle UK's twice-weekly newsletter, featuring the latest must-watch TV, moving personal stories, and expert advice on the hottest viral buys.