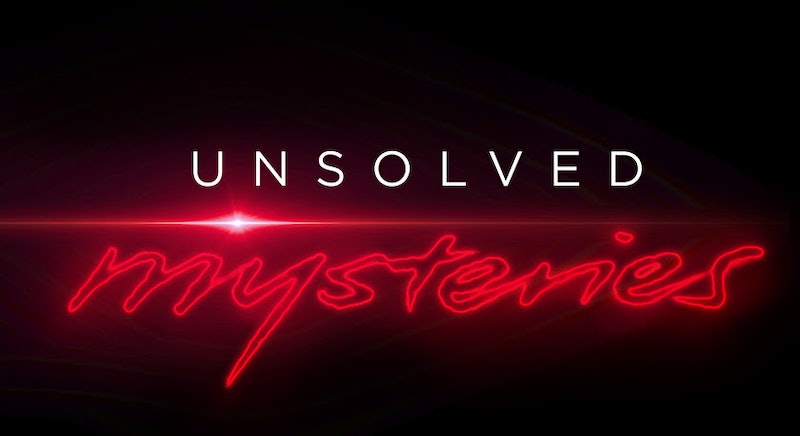 It's time to get your true crime thinking hat ready and your detective notebooks out because the Unsolved Mysteries Season 1 Volume 2 premiere date is closer than you think. Netflix announced on Wednesday, Aug. 19 that the popular true crime series will return with six brand new episodes on Oct. 19. And, like the first season, this new batch of episodes will be full of "unexplained disappearances, tragic events, and bizarre occurrences."

The first part of Netflix's Unsolved Mysteries reboot dropped on July 1 with six episodes that immediately captured viewers. So much so, executive producer Terry Dunn Meurer told USA Today in early July that just within 24 hours of Season 1's first six episodes' premiere, the Unsolved Mysteries team had received "credible tips" related to the cases shown. "It's only been 24 hours. We're hoping there's a lot of people who still haven't watched and maybe this weekend they'll sit down and binge the episodes and we'll get more leads," Meurer said.

Some of those first cases have already seen major development, specifically the mystery surrounding Alonzo Brooks' death. KSNT reported on July 21 that Brooks' body had been exhumed following the FBI reopening his 16-year-old cold case. And theorists on Reddit all over the world have been pouring over cases and collecting any evidence or clues they can.

"We are investigating whether Alonzo was murdered," U.S. Attorney Stephen McAllister said on June 11, according to KSNT. "His death certainly was suspicious, and someone, likely multiple people, know(s) what happened that night in April 2004. It is past time for the truth to come out. The code of silence must be broken. Alonzo's family deserves to know the truth, and it is time for justice to be served." A reward of up to $100,000 is also being offered for anyone who has information about Brooks' disappearance.

In 2004, Brooks attended a house party in the countryside of La Cygne, Kansas. Brooks never returned home and his body was found in a creek about a month later. At the time, his cause of death was ruled as inconclusive due to advanced decomposition. There were reports that several eyewitness recalled fights breaking out and racist comments reportedly being directed at Brooks, leading the FBI to now investigate Brooks' death as a potential hate crime.

The reopening of Brooks' case just goes to show that Unsolved Mysteries can potentially lead to justice. Here's hoping Vol. 2's new cases does the same for those in desperate need of answers.