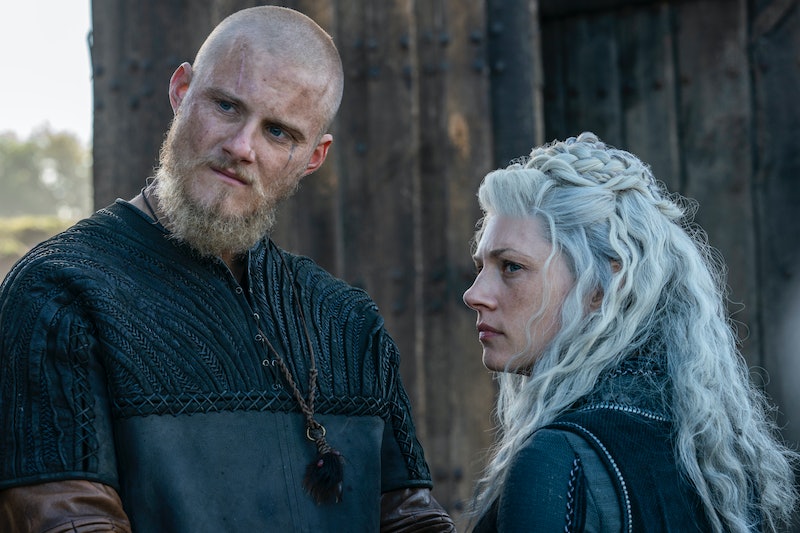 After six seasons of bloody battles, History Channel's Vikings is coming to a close. The series began with the legendary Viking chieftain Ragnar Lothbrok, and after his death, it followed his sons Bjorn Ironside (Alexander Ludwig) and Ivar (Alex Høgh Andersen). The last we saw of their family, Bjorn struggled to fill his father's shoes as the new king. Meanwhile, Ivan plotted from the shadows, and in the Season 6 midseason finale, he appeared to stab Bjorn. Per Deadline, Part 2 will air on Amazon Prime TV on Dec. 30 and finally conclude Bjorn and Ivan's stories, which means Vikings won't return for Season 7.

Vikings is an amalgamation of fact and legend — primarily the 13th-century Icelandic tale The Saga of Ragnar Lothbrok and The Tale of Ragnar’s Sons, per the Ancient History Encyclopedia — and takes significant liberties for dramatic effect. The tales don't really describe if and how Bjorn died, but Vikings showrunner Michael Hirst explained to Variety that he's always had a specific ending in mind. While fans may be sad to see it go, Hirst said that Vikings ends exactly when it should.

"I always knew where I wanted the show to go and more or less where it would end if I was given the opportunity," he said. "What I was trying to do was write the saga of Ragnar Lothbrok and his sons. After six seasons and 89 episodes, that’s what I felt — finally — I’d done. We stopped shooting the final episode in November last year, and I felt that I’d said all I needed to say about Ragnar and his sons ... I’m very proud of the show. I did what I wanted to do. That’s the truth."

While this is likely the last time we'll ever see these characters, Hirst added that he's nowhere near done with the Vikings world. There is already a new series in the works called Vikings: Valhalla, which will be set 100 years after the Vikings finale. And just like the original show, the Valhalla characters will all be based on historical figures. (Per Town & Country, it's supposed to debut in 2021, but it's unclear if the pandemic has changed that.)

Despite the huge time jump, Hirst doesn't see Valhalla as a totally new spin-off. Instead, he views it as an interconnected "continuation series" that he's "still going to be very involved with." Ultimately, Hirst reiterated that his goal with these shows is to always pay proper homage to history and how these characters' legacies feed into one another. "So I care, and have been caring, about them for a long time," he said. "I want to guide them through whatever storylines they have. That was my principal objective — to do justice to these incredible characters I found in history and helped to create onscreen."