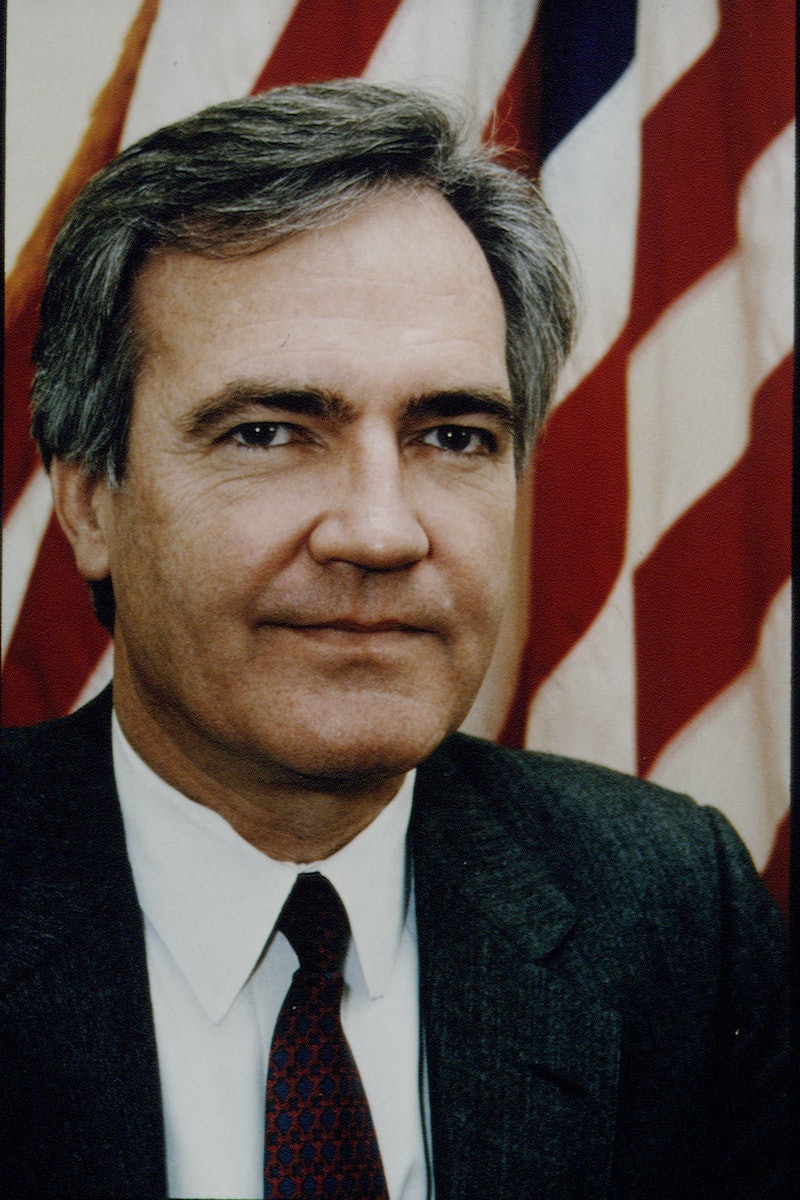 Impeachment: American Crime Story primarily centers around Bill Clinton’s affair with White House intern Monica Lewinsky and his 1998 impeachment. But the show also revisits a number of prominent figures and scandals surrounding his presidency. That includes the death of attorney Vince Foster (Matthew Floyd Miller), who served as deputy White House counsel during the Clinton administration but died by suicide in 1993 just six months after his appointment.

As reported by the New Yorker, Foster was childhood friends with Bill Clinton while growing up in Hope, Arkansas. “I lived with my grandparents in a modest little house across from Vince Foster’s nice, big, white brick house. And our backyards touched,” Clinton told his staff, per a 1993 Ocala Star-Banner article.

Foster excelled in his career. He graduated from Davidson College in North Carolina in 1967 and received his law degree from the University of Arkansas at Fayetteville in 1971. He then trained at the Rose Law Firm in Little Rock, where he specialized in corporate litigation for 22 years. Per The New York Times, the detail-oriented Foster thrived there, making nearly $300,000 a year while still having time for his family and friends. "I never saw a professional setback," one of his former firm partners said. "Never. Not even a tiny one."

Per Ocala Star-Banner, however, the pressures of Foster’s White House appointment weighed heavily on him from the moment he arrived in Washington. Though some felt Foster was so good at the job that they suggested making him a Supreme Court nominee, according to his wife Lisa, he was regretting ever leaving Little Rock by the time she joined him in Washington with their three kids.

Foster’s sister Sheila Foster Anthony reiterated the stress Foster was under in an op-ed for The Washington Post. “This is a grueling job in any administration, especially so at the start, and in the case of the Clinton White House, the counsel’s office — and Vince — were consumed with problems,” she wrote in 2016. “I think Vince felt he was a failure, this brilliant man who had so many talents, had achieved so many honors and was so well-respected by his peers.”

According to The New York Times, Foster was constantly criticized in the media for not doing enough. In particular, he came under fire for Travelgate, a scandal that revolved around the dysfunctional White House travel office. Essentially, Foster fired several workers who were embezzling funds, but was then criticized when it appeared that his subordinate might financially benefit from hiring new staffers. A later investigation found that Foster's behavior “had been prudent and proper,” but he still shouldered the blame. He began working 12-hour days and eventually brought up concerns about his depression to Anthony. She gave him a list of psychiatrists, but he never called any of them. On July 20, 1993, Foster’s body was found at Ft. Marcy, a small Civil War park in Virginia.

The Clintons returned to Little Rock to bury Foster. "We could never remember a time when he ever asked us to protect him; it was always the other way around," Bill Clinton said at Foster’s funeral. "If there is a sadness,” Clinton said, it is that "sometimes Vince ignored his own advice."

Five separate investigations concluded that Foster died by suicide, but in 2016 Donald Trump brought Foster’s death back into public discussion when he attempted to spread conspiracy theories about it. Per The Washington Post, Trump claimed that some people “think it was absolutely a murder,” and said that he thought the circumstances of Foster’s death were “very fishy.” (According to The New York Times, Trump’s Supreme Court nominee Brett Kavanaugh similarly obsessed over this theory, convincing Judge Kenneth Starr to spend $2 million investigating it in the 1990s.) Trump claimed that somehow the Clintons had a hand in Foster’s death.

But Anthony pushed back on all of these allegations. “Vince told me he was battling depression and knew he needed help. But he was worried that such an admission would adversely affect his top-level security clearance and prevent him from doing his job,” she wrote in The Washington Post. “I told him I would try to find a psychiatrist who could help him and protect his privacy. After a few phone calls, I gave him three names. That list was found in his wallet with his body at Ft. Marcy Park in McLean. I did not see a suicide coming, yet when I was told that Vince was dead I knew that he had killed himself. Never for a minute have I doubted that was what happened.”