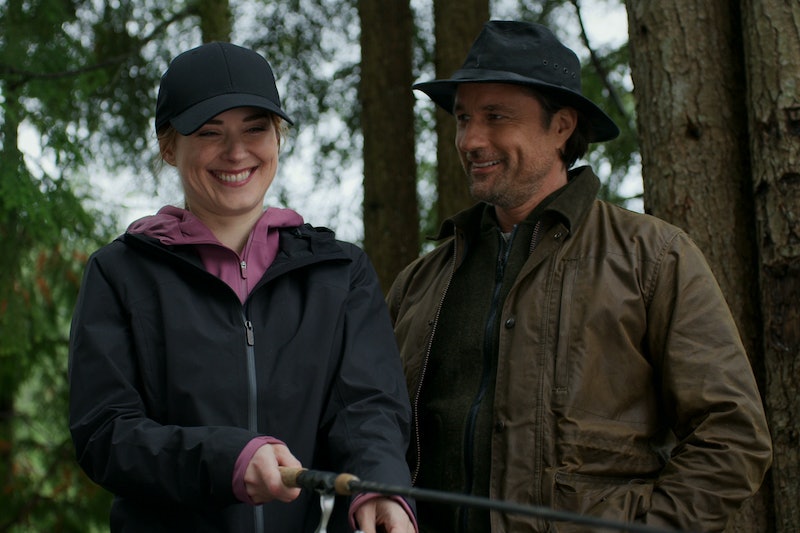 Spoilers ahead for Virgin River Season 2. Things were looking pretty perfect for Mel and Jack by the end of Virgin River Season 2 — so, naturally, the woodsy town had to throw the tragic lovers a curveball. Moments after Mel said she felt “happy and safe” by the fire with Jack (it’s a rarity for her to feel either of those things, much less at the same time), he was shot. The identity of the shooter is one of many questions Virgin River will have to address when the Netflix original returns for its third season.

Though new seasons of Virgin River have traditionally debuted in the fall and winter months, which is perfect because it’s one of the coziest shows on the platform, Season 3 drops July 9, giving viewers the chance to feast on the firelit cabin vibes a little earlier this year. Fortunately, it might not be the last entry in the series. Though Netflix hasn’t officially confirmed a Virgin River Season 4 renewal, What’s On Netflix reports that a fourth season is filming soon. But of course, before we look that far ahead, here are some of the key moments you’ll want to remember before Virgin River Season 3.

Something good from the world of Virgin River: Based on a Season 3 trailer released by Netflix, it seems Jack is alive and well after that tragic cliffhanger shooting. (Of course, did anyone ever have any doubt the show’s romantic co-lead wouldn’t make it through?) However, the identity of the shooter is still a concerning question. Whoever shot him could still be a looming threat over Jack, Mel, and the entire Virgin River.

Though the trailer implies the shooter is a mystery to Jack and co., there are a few possible culprits. The shooting happened right after Jack got word that Calvin’s operation was discovered — so if that bust was still going on, it’s possible Calvin, Brady, or one of the other workers made a pit-stop to the bar for revenge. But then again, the answer might be a little less obvious. As Alexandra Breckenridge, who plays Mel, told Entertainment Tonight in November, “The writers certainly are leading you to believe it’s that group of people,” she said. “But maybe ... there’ll be a twist in that.”

Of course, there was another distressing moment in the last few minutes of the finale that could serve as a clue, too: Paige sent her son, Christopher, to Preacher for safety after receiving a threatening message from her abusive ex-husband’s brother. That brother knew Preacher worked at the bar and could’ve come by to take Christopher back (or harm the man he suspected had something to do with his brother’s murder) and found Jack instead.

Regardless of whether or not Preacher was the intended target of the shooting, he’s due for some significant changes in Season 3. There’s no doubt he’s worrying about an on-the-run Paige and dealing with the disappointment of his San Francisco restaurant plans now that he’s sticking around to care for Christopher.

Right before they walked into the party celebrating their re-commitment to each other, Doc appeared to have something scary to share for Hope concerning a doctor’s visit. The Season 3 trailer offers a bit more clarity on his problem — the town’s trusted physician said he’s “maybe” going blind — but it remains to be seen how this new diagnosis might affect his practice and relationship with Hope.

From Paige and Christopher’s precarious situation to Jack’s strained relationship with the mother of his yet-to-be-born twins, Virgin River Season 2 was plagued with parental problems that don’t seem to be going away anytime soon. Along with the release of the show’s Season 3 trailer, Netflix wrote that the upcoming entry would feature “custody arguments.” Though who’s arguing with who (and why) is still a mystery, Virgin River is sure to deliver the drama when it returns on July 9.

More like this
Netflix Shut Down 'Bridgerton' S3 Rumours About A “Very Dark” Storyline
By Bustle
'The Queen’s Gambit' Season 2 Tweet Wasn’t From Anya Taylor-Joy
By Mary Kate McGrath, Jack Irvin and Grace Wehniainen
The 'Freeridge' Cast Shared Their Hopes For A Potential Season 2
By Grace Wehniainen
'The Crown' Season 6 Has Suspended Filming "Out Of Respect" For The Queen's Death
By Bustle Staff
Get Even More From Bustle — Sign Up For The Newsletter
From hair trends to relationship advice, our daily newsletter has everything you need to sound like a person who’s on TikTok, even if you aren’t.