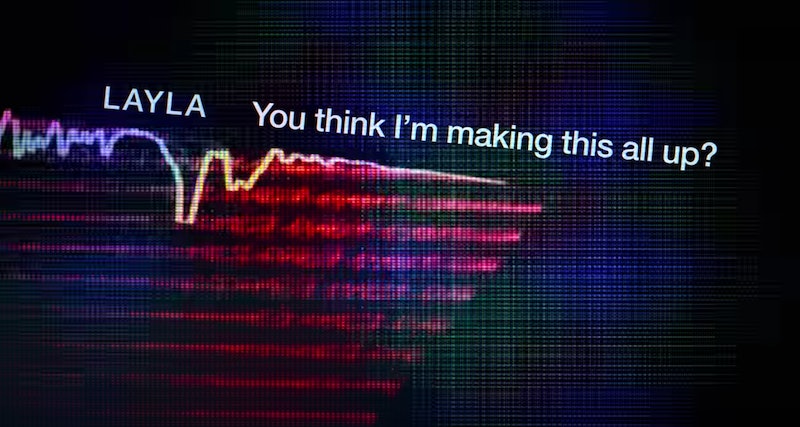 The new Apple TV+ series Calls is minimalist TV. It builds its apocalyptic world out of jumpy subtitles across a dark screen, abstract line visuals reminiscent of ’90s Windows screensavers, and voice performances from some of the biggest names in Hollywood. The nine episodes, none longer than 20 minutes, are connected by something vaguely paranormal and sinister. Directed by Don’t Breathe’s Fede Álvarez, the series is an English-language remake of a French hit. And like its title implies, the scripts are essentially a series of overlapping phone calls that grow increasingly fraught as the unexplained happens over and over again. The plot’s mysterious, but the voices on the other end of the line are recognizable. Here’s who you’ll hear on Calls.

EPISODE 3: Pedro Across the Street

“Long story short, he asked me to pick up a bag from his house. / Who asks for that?”

EPISODE 4: It’s All in Your Head

“This is gonna sound weird, but my arms are stretching and they’re getting longer.”

Featuring The Mandalorian’s Rosario Dawson and Laura Harrier from the Netflix mini-series Hollywood.

EPISODE 5: Me, Myself, and Darlene

“I just shot her. And I’m calling to turn myself in, so if you wanna send someone down here, I’ll wait.”

EPISODE 6: The Universe Did It

“Last time I saw you, you said you loved me since the eighth grade and you knew you always would.”

“... and then you’ll connect with someone in the future. / Or in the past. Hopefully the past.”

Starring The Act’s Joey King and Jaeden Martell from Knives Out.

EPISODE 8: Is There a Scientist on the Plane?

“Captain. Our flight, this flight, it’s all over the news. They’re saying we crashed somewhere over Phoenix.”

“Please put your daddy issues aside, OK? The fate of the world depends on it.”

Plaza and Brown are joined by Avatar’s Stephen Lang and Danny Pudi from Community in the Season 1 finale.