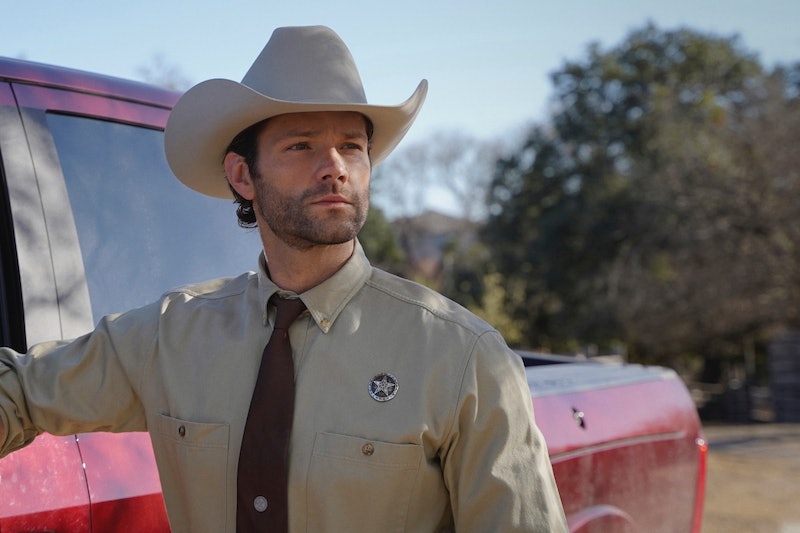 Here to fill the Jared Padalecki-sized hole in Supernatural fans' hearts left by the series' historic end is The CW's reboot of Walker, Texas Ranger, which is simply titled Walker. But instead of hunting monsters and demons as Sam Winchester, Padalecki will track down criminals and navigate a widower's life as Cordell Walker. The actor himself executive produces the series, and after 15 and a half years of making Supernatural in Vancouver, he's elated to settle back down in his home state of Texas, where filming took place.

"It's really a different show. I mean, I don't think it could be more different than the original," Padalecki told Newsweek, comparing the original Walker to the reboot. "This show is more trying to help provide a voice to the voiceless, whereas the last show was more purely like 'I am hero, hear me roar' kind of situation." Another major change to the adaptation is Walker's partner — in the new version, she's a woman; one of the first Latinx women to be a Ranger. Get to know more about her character and the rest of The CW's Walker cast below.

Joining the Rangers as a minority in more ways than one, Lindsey Morgan's Micki Ramirez is under a lot of pressure. "I'm very much in this fish out of water element in a very male-dominated space," Morgan told Showbiz CheatSheet in December of her character, who is Walker's partner. She's constantly having to prove that she's more than a diversity hire. "My character is breaking a lot of rules and norms and fighting for change and fighting for a new era of law enforcement."

Toby Cavanaugh from Pretty Little Liars is now Cordell Walker's younger brother Liam, a gay conservative assistant district attorney who "has always stayed close to home, often sacrificing his personal life in favor of his family duties," per TVLine. While Cordell is off investigating the death of his wife, Liam looks after his kids and forms a close bond with them.

Pileggi, formerly cast in Supergirl and NCIS, plays Walker's father, a third-generation rancher who's "tough as nails but a family man through and through," per Deadline. Hagan plays Abeline, his equally strong, "smart and perceptive" mother. Both parents want what's best for their son, which means they're not afraid to tell him what he needs (but maybe doesn't want) to hear.

You know him from Shameless and Once Upon a Time. In Walker, Jeff Pierre plays Trey, an Army medic back from deployment who's also Micki's boyfriend.

Walker's former colleague-turned-boss Larry James is a Texas Ranger Captain who, like Micki, is one of the few people of color in his workplace.

Brinson recently had a role in HBO's Sharp Objects, and Culley has appeared in black-ish, Fresh Off The Boat, and NCIS. They play Walker's children Stella and Arlo Walker, and they have a lot to learn from their unique family dynamic.

You read that right — Jared's real-life wife and former Supernatural co-star Genevieve portrays his character's late wife, Emily Walker, who will appear in the series via flashbacks. According to Entertainment Weekly, she's described as "brave and focused on helping the disenfranchised" and the family's "grounded and authentic hero."

More like this
The 'Freeridge' Cast Shared Their Hopes For A Potential Season 2
By Grace Wehniainen
You Might Want To Rewatch This Key 'On My Block' Scene To Understand 'Freeridge'
By Grace Wehniainen
A 'Terminal List' Sequel & Spinoff Are Reportedly In The Works
By Kadin Burnett and Grace Wehniainen
Pamela Anderson's Sons Brandon & Dylan Have Their Own Hollywood Careers
By Arya Roshanian
Get Even More From Bustle — Sign Up For The Newsletter
From hair trends to relationship advice, our daily newsletter has everything you need to sound like a person who’s on TikTok, even if you aren’t.