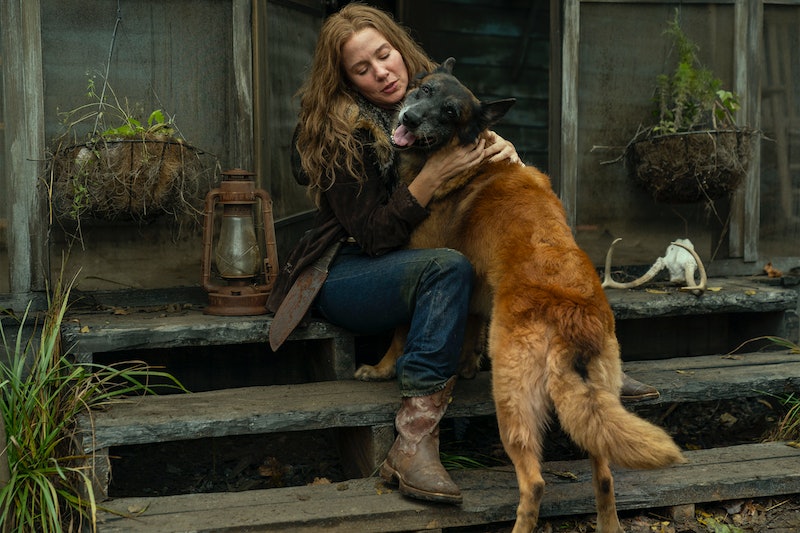 We may not know much about who Leah is or where she went after leaving Daryl on The Walking Dead, but some fans are convinced she means bad news. Following Episode 18, in which we learned about her relationship with Daryl, Twitter users began floating the theory that Leah is part of the Reapers, the daunting new group introduced earlier in Season 10.

“Can already see where this is going. Daryl and Connie are going to reunite, then Leah is going to come back to complicate things (thinking Leah is going to be with the Reapers),” tweeted one viewer. Another agreed: “Introducing her as Daryl's love interest would help make people know who she is when we see her in that group. There's got 2 be a recognisable member of the Reapers & Leah could now fill that role.”

Writer Dawn Glen further pointed out on The Undead Walking that Leah’s military background aligns with the Reapers’ tactical training (remember the sniper in the woods, picking off Maggie’s group of survivors one by one?). Plus, her tattoo may have been another hint. “Leah’s tattoo, on her upper right arm, depicts a logo that is clearly meant to evoke the special forces,” Glen wrote. “It looks like a military badge with the words “Fortitudo Saludis” ... In its center, there is a skull wearing a beret, with 3 lightning streaks coming out of each side of it.”

Plus, let’s not forget that Daryl has a history of unwittingly bringing danger to the group. After he fell in with the Claimers during Season 4, they almost killed Rick, Carl, and Michonne on the road.

Still, this isn’t the only theory about Leah. Others think that she isn’t a Reaper herself, but was actually captured by them (hence her disappearance by the end of “Find Me”). “If there’s someone around who wants to grab someone…they’re not going to be amateurs. If they’ve survived up to this point, they need to be tough,” Liam O’Leary wrote in another Undead Walking article.

The Reapers definitely fit the description of someone strong and savvy enough to take Leah. Given that they were hunting down Maggie and her friends, they seem to be a vengeful people, so perhaps Leah crossed the wrong Reaper at some point?

O’Leary also noted the appearance of possible bullet holes in the present-day cabin, suggesting some kind of struggle that might explain Leah’s absence. Several Twitter users raised the same theory, with one writing, “I immediately thought the reapers got Leah. The writers are not going to introduce this storyline if they didn't have plans to elaborate.” Another user suggested she could have been taken by the Commonwealth.

There’s a lot to wonder about, but here’s what we know for sure: showrunner Angela Kang has said that both the Reapers and Daryl’s flashback episode were originally planned for Season 11, which suggests they connect in some way. Seeing Leah again also feels inevitable: Kang coyly told Entertainment Weekly to “watch Season 11 as that comes along” to find out for sure.