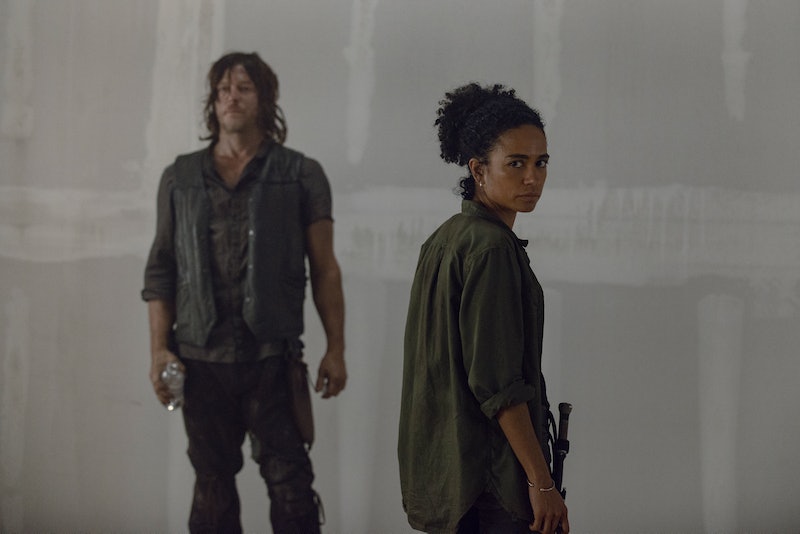 The Walking Dead may be dealing with broken communities and the Whisperers right now, but that doesn’t mean there isn’t time for a new ship to set sail. In Episode 11, Daryl and Connie embarked on a brave mission to save Henry from his own stupidity. As the pair passed communication notes and walked off together, more than a few audible sighs filled the atmosphere at how freaking cute they looked together. And, last week’s episode showed the duo on the road as Connie encouraged Daryl to face her so she could read his lips. They successfully retrieved Henry and Lydia and now some fans are hoping they will capture each other's hearts. So is there romance between Caryl and Connie on The Walking Dead? The signs are finally pointing towards the crossbow carrying loner having his first romantic relationship in the apocalypse.

Norman Reedus added fuel to the fire when he re-tweeted a Hollywood Reporter article about the potential setup of the Connie and Daryl romance. He doesn't post a lot of articles or interact a lot on Twitter, so Walking Dead lovers were surprised to see him share this particular article. Is he just teasing fans or was this our first big hint about a budding romance? Only time will tell. Similar to many relationships on the show, the Daryl/Connie pairing isn’t based on the comics because Daryl does not exist in that medium.

However, TV series only fans might be surprised to learn that Connie is a comic character and comic Kelly is actually her boyfriend instead of her sister. Connie and Kelly were both a part of Magna’s group, survived the Whisperer war, and are still alive in the comics today, so perhaps she will live on with Daryl.

Connie and Daryl haven't had much screen time together but this relationship already makes total sense. She is his match in terms of wielding a unique weapon and tracking people and she’s one of the bravest and most resourceful survivors in the apocalypse. Think about it. Daryl, Michonne, and others have had survival struggles without a disability, so her ability to survive without being able to hear is fantastic.

Like Daryl, she's willing to put herself in harm's way to save others and cannot be easily deterred from any mission she sets in her heart. And, she brings a different level of emotional intelligence and a new perspective that will challenge Daryl in every way. It's interesting to see a different side of Daryl as he softens in her presence and, the truth is, he needs someone like her right now.

Most people give in to his desire to retreat and do certain things as a loner, but Connie refuses to let him walk a dangerous path without backup. Rick is gone, Maggie is gone, and Michonne is leaving, so Daryl is going to have to become even more of a leader among the communities and he could use a steadfast and smart person like Connie by his side. And, it would be wonderful to see them find joy and romantic companionship in the apocalypse.

Connie and Daryl show a clear admiration for each other’s survival skills and work well together despite Daryl’s lack of ASL knowledge. And, there was definitely some flirtation going on as Connie smiled at Daryl scolding Dog. Mmm hmm. Let’s make this a thing, Angela Kang. Give us all the hugs, love, and ASL lessons ASAP!

Of course, Caryl (Carol & Daryl) shippers aren’t feeling this potential hookup even though they know that ship sunk many seasons ago. And, there are likely others who feel like Daryl is better off without the messy feels that come with love in the apocalypse. Yeah, there has certainly been a pattern of people falling in love only for one person to end up dying (you might be next Ezekiel) but perhaps this could be the relationship that survives to the end of the TV series.

All hail #Donnie, the relationship that better become canon unless AMC wants a fandom riot.