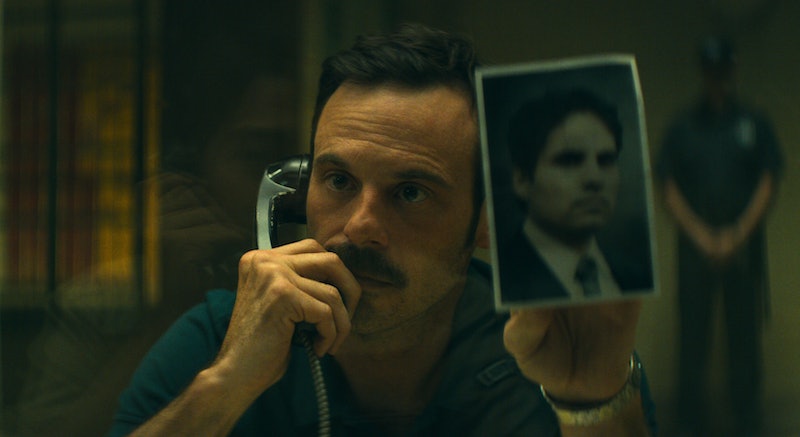 He didn’t quite succeed in his mission, and in the third and final season, he’s still looking for “some sort of gratification or justification,” McNairy told ScreenRant. “He's still searching for that win. He's just changed his tactics a bit.”

Walt is largely a fictional character, but McNairy told Collider that he’s "loosely based” on a real person. He has similarities to DEA agent Hector Berrellez, a real member of Operation Leyenda. According to Charles Bowden and Molly Molloy's three-part story in the Medium publication Matter, Berrellez was recruited to run Operation Leyenda in January 1989. He was seemingly higher up the food chain than Walt, but their goal was the same: to find out who killed Camarena in February 1985.

A former homicide cop who had already worked undercover and was fluent in Spanish, Berrellez seemed like a natural fit to lead Operation Leyenda. Though he never met Camarena in person, the two spoke on the phone about various cases prior to Camarena’s murder. According to Matter, Berrellez was given $3 million a year and a team of 20 agents and directed to find witnesses in the room where Camarena was killed.

Eventually, Ernesto "Don Neto" Fonseca (played by Joaquín Cosio), Miguel Ángel Félix Gallardo (Diego Luna), and Rafael Caro Quintero (Tenoch Huerta) were all convicted and imprisoned for their involvement in Camarena's death, per the BBC. Gallardo was captured in April 1989 and is still serving his sentence, Quintero was released from prison in 2013, and Fonseca was transferred to house arrest in 2016 due to his old age and declining health.

However, Berrellez has claimed that the CIA was also involved in Camarena’s death. "The whole case stinks, and if you don't step away you'll stink, too. Your own government killed Camarena," the former DEA agent recalled one of his witnesses telling him, per LA Weekly. Indeed, a Cuban CIA agent named Felix Rodríguez was allegedly present when Camarena was kidnapped and tortured. (According to Matter, Rodríguez has denied any involvement in Camarena's murder.)

McNairy was interested in capturing this complicated legacy through Walt. “I had chalked DEA agents up to be these sort of clean-cut law enforcement guys. What I learned is that they’re not,” he told The Hollywood Reporter, noting that he spent time with retired DEA agent James Kuykendall to prepare for the role. “Hearing that the DEA has programs for agents who are alcoholics or who get into drug abuse, you realize the stress of this business and that those guys have some of the same problems as what they’re fighting against, which I think gets developed into the character of Walt. Here’s a guy who is not a clean-cut law enforcement guy; he’s got a lot of demons of his own that he’s not dealing with.”

Both Berrellez and Phil Jordan — the former director of DEA's El Paso Intelligence Center — have said that there are factual inconsistencies in Narcos: Mexico. For example, they claimed Camarena wasn't involved with the Búfalo Marijuana fields, as was depicted in Season 1. Regardless, the show has since moved on from the case.

More like this
A Portion Of The I Am Vanessa Guillén Act Was Signed Into Law
By Grace Wehniainen
Vanessa Guillén's Family Is Still Fighting For Service Members Like Her
By Grace Wehniainen
'Black Bird' Subject James Keene’s Book Helped With His “Redemption”
By Brad Witter
How Is The British Royal Family Related To The Romanovs?
By Karen Fratti
Get Even More From Bustle — Sign Up For The Newsletter