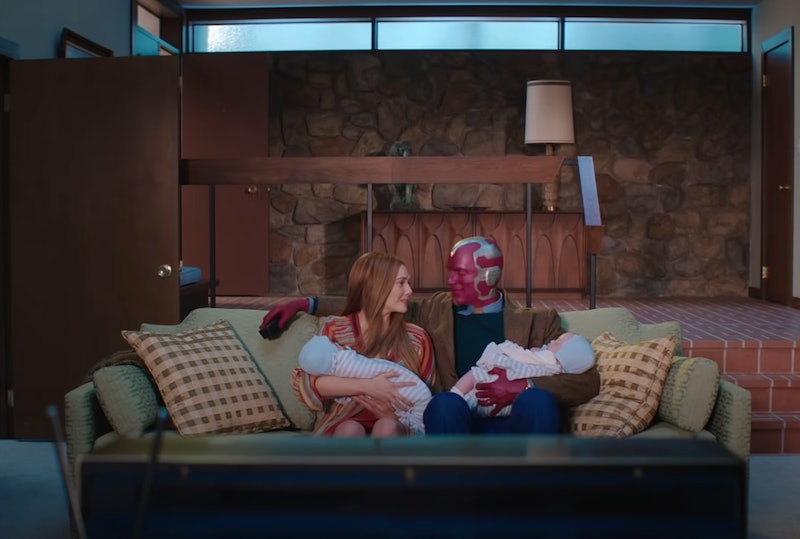 Spoilers ahead for Episode 3 of WandaVision. Episode 2 of WandaVision ended with Wanda Maximoff (aka Scarlet Witch) realizing that she's pregnant. But the start of the third episode makes it clear that this isn't a normal pregnancy. When the doctor examines Wanda, he deduces that she's four months along — despite the fact that she only just realized she's expecting. Things only get weirder from there, with the town of Westview descending into magical chaos as Wanda's belly continues to grow. Later, she gives birth to two baby boys: Tommy and Billy.

This seemingly confirms the longstanding fan theory that WandaVision is drawing from Marvel's House of M comics, in which Wanda has a mental breakdown after the events of the Avengers Disassembled and warps reality to create a "perfect" world that reunites her with Vision and their twin sons, Tommy and Billy. It's not just Wanda's own life that she alters, though. In the House of M cosmic, which involves both the Avengers and the X-Men, the reality she creates also provides new, idealized lives to all the heroes (and villains) in their universe, making it even more difficult for them to realize the truth of what's going on. Wolverine is the only one who retains his memory, and he sets out to reverse Wanda's magic. He's able to jog the other heroes' memories with the help of a mutant named Layla Miller, and Wanda eventually agrees to restore their previous reality. There's just one condition: she depowers most of the world's mutants in the process (but later helps to save their race in Avengers vs. X-Men).

It's not yet clear if the altered reality of WandaVision has similarly affected members of the Avengers other than Wanda (and potentially Vision). But the series has already shown that even if Wanda didn't create this new reality herself, she is actively choosing to preserve it — even as unknown entities are attempting to break through the reality to contact her.

More like this
'The Queen’s Gambit' Season 2 Tweet Wasn’t From Anya Taylor-Joy
By Mary Kate McGrath, Jack Irvin and Grace Wehniainen
Netflix Shut Down 'Bridgerton' S3 Rumours About A “Very Dark” Storyline
By Bustle
Bill & Frank’s 'The Last Of Us' Episode Has Twitter Emotionally Wrecked
By Alyssa Lapid
'Happy Valley' Recreated This Moment From S1 In Its Penultimate Episode
By Sophie McEvoy
Get Even More From Bustle — Sign Up For The Newsletter
From hair trends to relationship advice, our daily newsletter has everything you need to sound like a person who’s on TikTok, even if you aren’t.