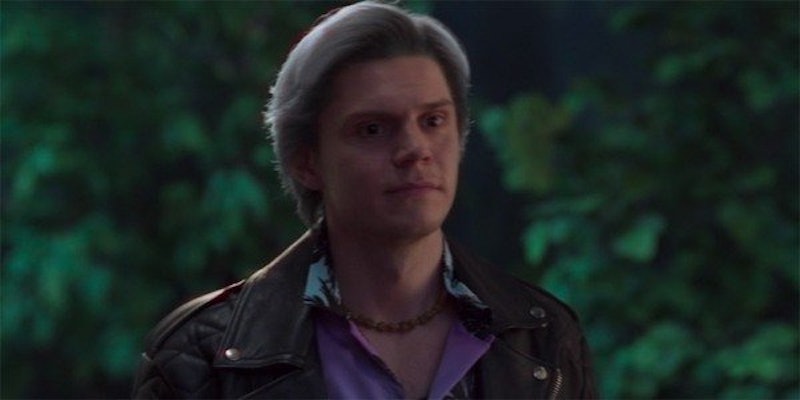 Spoilers ahead for WandaVision Episode 5, "On a Very Special Episode." The majority of WandaVision's fifth episode seems to make the case that Wanda has absolute control over the fake sitcom reality in Westview. As Dr. Lewis, Agent Woo, and Captain Rambeau attempt to understand how she could have created this alternate universe from outside the bubble, Vision begins to piece together that the residents of Westview have all been put there by his wife against their will. But all of that is thrown into question when a surprise visitor arrives at the Maximoffs' doorstep: Pietro/Quicksilver, Wanda's twin brother who, like Vision, is supposedly dead.

Though the character was played by Aaron Taylor-Johnson in earlier MCU films, in WandaVision it's Evan Peters, who portrayed Quicksilver in Fox's X-Men movies — hence why Dr. Lewis mutters "she recast Pietro?" when he appears. The implications of this are complicated — both within WandaVision and potentially within the broader MCU. Peters' appearance as Pietro/Quicksilver marks the first time that the Marvel cinematic universe has overlapped with Fox's X-men universe, a crossover that is only now possible due to the Disney/Fox merger in 2019. It's already been confirmed that the upcoming MCU Spider-Man movie will explore the multiverse by bringing in characters from previous Spider-Man trilogies, so it's not a stretch to assume other Marvel movies will take similar liberties.

If Peters' casting in the series is a true crossover, this could mean that WandaVision is (finally!) introducing mutants into the MCU — a development that many fans have long anticipated. It makes sense to use Wanda and Pietro as the threads connecting the two cinematic universes since, in the Marvel comics, the Maximoffs were once believed to be mutants themselves. However, it's clear by now that things in Westview aren't what they seem, making it equally possible that Peters is actually portraying another character pretending to be Pietro — potentially another resident of the town or perhaps a more sinister force like the demon Mephisto. Introducing Peters as Pietro only to reveal he's a different character would be a bit of a bait-and-switch for fans who've long been waiting for the X-Men and Avengers to cross over, but with the MCU, you never know.

So, what does all of this mean for WandaVision? It's hard to say! Wanda has mentioned Pietro several times throughout the series, and it's always been outright stated or at least implied that he's dead. Though Vision's very existence in WandaVision has made clear that the show is playing loose with life and death, Pietro has been dead for much longer than Vision. So his reappearance, seemingly as an entirely different person, throws a wrench into the understanding viewers have been developing of what's actually going on in Westview.

Instead of supporting the theory that Wanda is solely responsible for creating this sitcom alternate reality, the arrival of Pietro suggests that someone other than Wanda could be controlling the events occurring in the town, and potentially manipulating Wanda's own behavior as well. Not only does Wanda seem genuinely surprised to see Pietro at her door, but the timing of his arrival is more than a little suspicious — he rings the doorbell right as Vision is confronting Wanda about mind-controlling the Westview residents, moments after she said "I don't know how any of this started in the first place." What better way to distract them from figuring things out than the arrival of Wanda's long-dead brother?

Whether Peters' Pietro will be a friend or a foe to Wanda and Vision, the bombshell of his arrival hints that WandaVision still has plenty of tricks left up its sleeve.

More like this
Wait, Is Barney Stinson Related To Sophie On 'HIMYF'?
By Gretchen Smail
Everything To Know About 'And Just Like That...' Season 2
By Jack Irvin and Grace Wehniainen
6 'Happy Valley' Easter Eggs You May Have Missed
By Sophie McEvoy
Claire Foy Spoke Out About 'The Crown's Gender Pay Gap
By Sam Ramsden
Get Even More From Bustle — Sign Up For The Newsletter
From hair trends to relationship advice, our daily newsletter has everything you need to sound like a person who’s on TikTok, even if you aren’t.