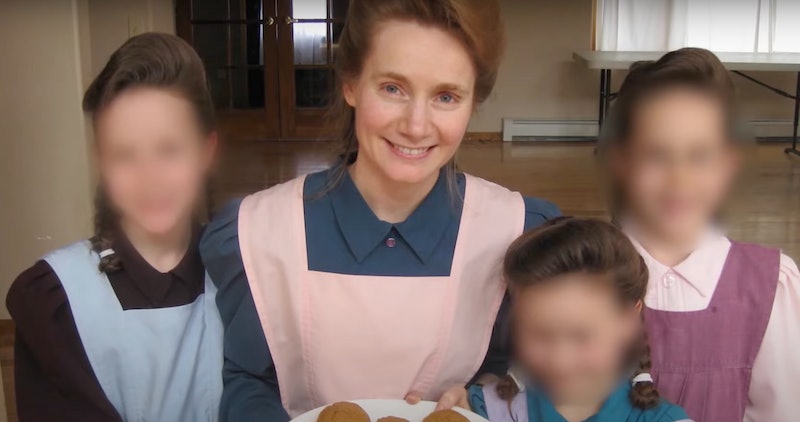 “For a man to become a god, he must have a plurality of wives.” These words were spoken by notorious cult leader Warren Jeffs, the subject of Peacock’s new true crime docuseries Preaching Evil. Filmed largely from the point of view of his “favorite wife” Naomi Jessop and former wife Vicki Thompson, the four-part series explores the “culture of sexual abuse” that Jeffs fostered at the Fundamentalist Church of Jesus Christ of Latter-day Saints (FLDS), a polygamy-centric sect of the Mormon Church created in 1930 and designated a hate group by the Southern Poverty Law Center.

FLDS is located in Short Creek, which sits on the border between Hildale, Utah, and Colorado City, Arizona. Jeffs became the president of FLDS in 2002; per The Guardian, he ran his church like a dictator, splitting families apart, banning all socializing with the outside world, and ruling from a 44-room mansion. All FLDS women were forced to wear conservative prairie dresses, and were assigned to men at Jeffs’ leisure. Warren Jeffs allegedly had around 80 wives all for himself, many of whom were children when they were forced into marriage. The girls were told to “keep sweet” — smile all the time — and he routinely expected his wives to participate in group sex that he referred to as “heavenly sessions.” According to The Daily Mail, 29 of Jeffs’ wives were formerly married to his father, Rulon, while 56 of them were sisters and 24 were under the age of 17.

Jeffs came under government scrutiny in 2005 after he forced two teenage girls into marriages with adult men, which landed him on the FBI’s most wanted list. He was arrested in 2006, and in 2011, Jeffs was found guilty of assaulting two girls and was given a life sentence at the Texas Department of Criminal Justice’s Louis C. Powledge Unit.

As an intensely secretive sect, there is scant information about what has happened to all of Warren Jeffs’ wives. Here’s everything we know about his wives who have publicly spoken out.

Naomie Jessop was Jeffs’ father’s wife, but married Jeffs when Rulon died. As his former step-mother and a scribe for the church, Jessop knew of the inner workings of FLDS and was considered a close confidant. But her detailed logs of Jeffs’ words, travels, and illegal actions also helped create a “roadmap for criminal activity” that prosecutors later honed in on for his arrest. Jessop is prominently featured in Preaching Evil, where she tells the story of her upbringing and her time in the church.

In the wake of the upheavals after Jeffs’ arrest, the sisters Josephine Jessop, Naomi Johnson Jessop (not to be confused with “favorite wife” Naomie), and Della Black were given an eviction notice in 2015. (Judges found that the police force and town officials deferred to Jeffs, and congregants didn’t own any homes but rather were assigned them by FLDS leaders.) The three were fleeing their home in two separate vans when a flash flood hit. All three women, along with nine of their children, died, per NBC News.

Briell Decker was wife number 65, and she opened up about her traumatic experiences with Jeffs in a TED Talk and the Year of Polygamy podcast. Decker grew up in Sandy, Utah, and moved to the FLDS area as a teen. Her sister was married to Jeffs’ father, Rulon Leffs, and she was “turned in” by her father when she was 18, meaning she was given to Warren Jeffs without her consent. She said it wasn’t a happy occasion, with her mother screaming “no” while her siblings told her that marrying Jeffs was like attending her own funeral.

Eight years later, Decker fled the compound and changed her name, her social security number, and was legally adopted in Tennessee. But she later returned to purchase Jeffs’ 44-room mansion. She now uses it as a refuge for other women fleeing FLDS, as well as those dealing with substance misuse and mental health issues.

Jeffs’ second wife was Barbara, and while she never spoke out, her daughter Rachel later did. Per The Salt Lake Tribune, Barbara died in 2004 from cancer. Rachel said that Warren Jeffs didn’t allow any kind of a viewing line for her body, and her children weren’t even allowed to see the casket; the funeral was also restricted to people only on the compound, which meant that her outside family members never got to pay their respects. Jeffs also made her death about himself: “He turned it into, ‘Oh, I’m so poor because my wife died,’” Rachel told the Tribune.

Barbara was buried at the Yearning For Zion ranch in Texas, but when the state moved to sell the property, her body was exhumed. Rachel paid to have the body moved, and she’s now buried next to her father, Isaac Barlow, in Arizona.

Little information is known about his many other wives. Decker told NBC 12 News that one wife (who could have been Barbara Jeffs) was diagnosed with cancer, and in response Jeffs told her that she was being punished for having an “evil spirit.” Decker alleges that the wife was locked up in solitary confinement and only fed through a door until she died. Per Deseret News, there are likely wives who are still loyal to Jeffs, as two separate women were caught trying to smuggle contraband to him in prison. Others allege Jeffs still wields power over his followers from his cell, even to this day.

More like this
Yes, Billboard Queen Angelyne Really Ran For Governor Of California
By Brad Witter
50 Years After Creating Her Alter Ego, Angelyne Is Still Driving That Pink Convertible
By Gretchen Smail
Gillian Teased A Surprising Ending In 'Temptation Island' Season 4
By Kadin Burnett
Trace Is Dropping Ominous Hints About 'The Temptation' Island Reunion
By Kadin Burnett
Get Even More From Bustle — Sign Up For The Newsletter