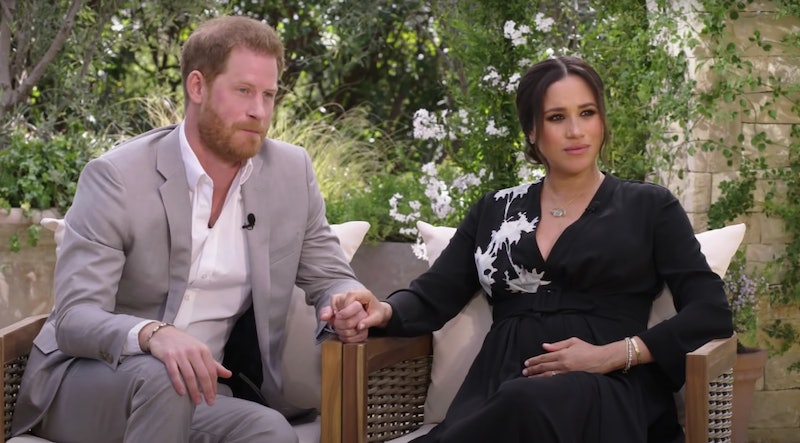 It's been more than a year since Prince Harry and Meghan Markle stepped away from their official royal duties and the couple has continued to dominate headline with announcements. Following the recent news of their second child (Feb. 14), the Duke and Duchess of Sussex will join Oprah Winfrey to discuss their momentous move to the United States and more. The "intimate conversation" will be aired in the U.S. this month, but how can UK viewers watch Meghan and Harry's Oprah interview?

Oprah With Meghan And Harry: A CBS Primetime Special will first be broadcast on CBS on March 7 and, per Radio Times, will be available to watch the following day at 9 p.m. on ITV.

Needless to say, the 90 minute tell-all documentary is expected to draw in huge viewing figures globally.

Oprah Winfrey will conduct a "wide-ranging interview" with the Duchess of Sussex, confirms CBS in a statement. Winfrey, who attended the couple's Royal Wedding in 2018, will be speaking to Markle about "stepping into life as a royal, marriage, motherhood, philanthropic work to how she is handling life under intense public pressure."

Prince Harry will join the two-part interview later to speak about their move to the United States and the hopes and dreams they have for their expanding family.

As Bustle reported earlier this week, Buckingham Palace has responded to Harry and Meghan's Oprah interview.

According to the Daily Mail's royal correspondent, Rebecca English, Buckingham Palace have said that "The Duke and Duchess are no longer working members of the royal family and therefore any decisions they take with regard to media commitments are matters for them.

"As non working MRF [members of the royal family] they are under no obligation to inform the Royal Household of such plans,” she continued.

Speaking about the newspaper's coverage, English said she "understands there’s little prospect of them keeping any royal patronages now" and that this "is likely to have figured in their thinking."

Meanwhile, Prince Harry is also working on another project with Oprah Winfrey. Back in 2019, it was confirmed that they would be running a multi-part TV show on "mental illness and mental wellness" to air on Apple TV+.

Oprah With Meghan And Harry: A CBS Primetime Special will air on March 7.

More like this
Turns Out George Clooney Is A Huge Fan Of This Classic British Game Show
By El Hunt
Helena Bonham Carter Doesn't Think 'The Crown' “Should Carry On"
By Sam Ramsden
Meghan & Harry Respond To Jeremy Clarkson’s "Apology" Over *That* Column
By Sophie McEvoy
'The Traitors' Is Officially Being Turned Into A Board Game
By El Hunt
Get The Very Best Of Bustle/UK
Sign up for Bustle UK's twice-weekly newsletter, featuring the latest must-watch TV, moving personal stories, and expert advice on the hottest viral buys.