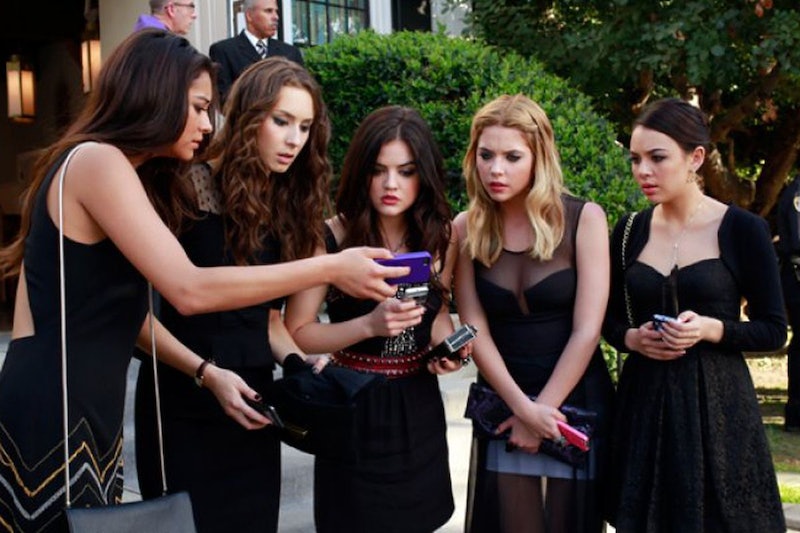 If Pretty Little Liars taught us anything it's that secrets are everywhere. Well, turns out the show's creators have been sitting on some pretty big news. The teen series, based on books by Sara Shepard, is getting a new spin-off series from the creator of Riverdale. It’s a match made in teen drama heaven. So will Pretty Little Liars: Original Sin air in the UK? There’s some key changes coming in the new series and fans are hoping it’ll be aired in the next year on HBO Max. But how can all the Little Liars in the UK get their fix?

In a cryptic post on Instagram on Sept. 24, the Pretty Little Liars team shared the message, “it's not what you think, b*tches. -A.” Underneath the post they wrote, “New town. New secrets. New Little Liars. A new generation of Pretty Little Liars is coming to @hbomax. @PLLTVSeries — PRETTY LITTLE LIARS: ORIGINAL SIN —from @WriterRAS, Lindsay Calhoon Bring, Alloy Entertainment and @warnerbrostv #PLL.”

The Hollywood Reporter first reported that the PLL girls would be scheming their way back onto our screens with a twist from Riverdale creator Roberto Aguirre-Sacasa. There’s no release date stateside yet and no confirmation that the series will come to the UK.

Currently you can watch past series of PLL by purchasing them on Amazon Prime. I reached out to representatives from HBO Max to establish if the show would be making its way across the pond. I will update this piece when new information becomes available.

Like the original series, Original Sin will follow the books of Sara Shepard. The new series promises to focus on the next generation of liars with new drama, villains, and dirty little secrets. It’s been reported that the series won’t be returning to Rosewood. It’ll be set in the present day 20 years later.

The show's description says, “20 years ago, a series of tragic events almost ripped the blue-collar town of Millwood apart. Now, in the present day, a group of disparate teen girls—a brand-new set of Little Liars—find themselves tormented by an unknown Assailant and made to pay for the secret sin their parents committed two decades ago...as well as their own. In the dark, coming-of-RAGE, horror-tinged drama Pretty Little Liars: Original Sin, we find ourselves miles away from Rosewood, but within the existing Pretty Little Liars universe—in a brand new town, with a new generation of Little Liars.” I’ve got chills just reading it.

Pretty Little Liars and Riverdale are two powerhouses in teen drama. A mash up feels perfect. Speaking about working on the series Roberto Aguirre-Sacasa and Lindsay Calhoon Bring said: “We’re such huge fans of what I. Marlene King and her iconic cast created, we knew that we had to treat the original series as #CANON and do something different. So we’re leaning into the suspense and horror in this reboot, which hopefully will honor what the fans loved about the hit series, while weaving in new, unexpected elements."

More like this
Everything To Know About The 'Daisy Jones & The Six' TV Series
By Maxine Harrison and Brad Witter
Yes, 'The Price Of Glee' Is Available To Watch In The UK
By Catharina Cheung
Twitter Is Burning As Phoebe Dynevor Reveals Daphne’s 'Bridgerton' Exit
By Sophie McEvoy
Helena Bonham Carter Doesn't Think 'The Crown' “Should Carry On"
By Sam Ramsden
Get The Very Best Of Bustle/UK
Sign up for Bustle UK's twice-weekly newsletter, featuring the latest must-watch TV, moving personal stories, and expert advice on the hottest viral buys.