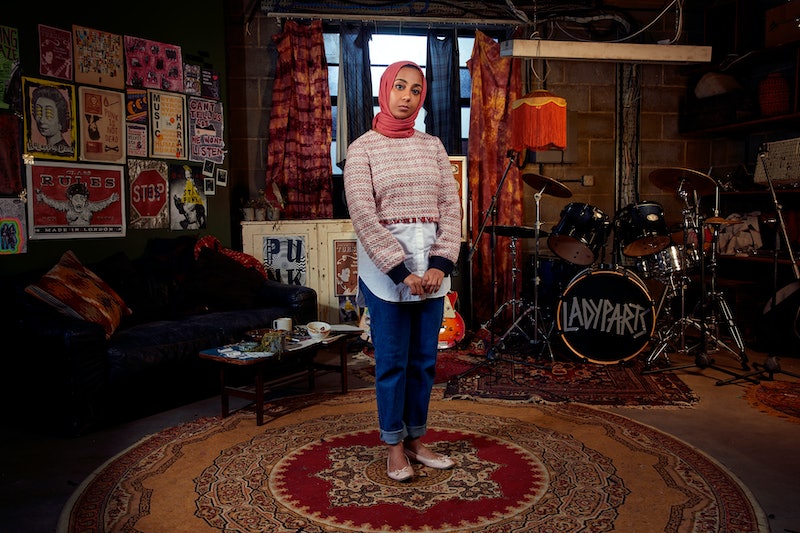 Channel 4’s riotous and stereotype-busting new comedy We Are Lady Parts has received stellar reviews since it first aired earlier this month. In case you haven’t seen it yet, the six-part musical comedy centres on a fictional all-female, Muslim punk band called Lady Parts. It sees goody-two-shoes microbiology PhD student Amina Hussein become their lead guitarist, and become caught up between two different worlds. The We Are Lady Parts cast are brilliant to watch – so who is the actor who plays Amina, Anjana Vasan?

Originally from Singapore, Anjana Vasan is no stranger to either music or acting – which makes her ideal for the role of Amina in We Are Lady Parts. After moving to the UK to study at the Royal Welsh College of Music & Drama, she started out in theatre, including acclaimed performances in A Midsummer’s Dream, Summer and Smoke and A Doll’s House. According to IMDB, the actor-singer-songwriter then graduated to the screen; she has appeared in mainstream productions from Spider-Man: Far From Home (2019) to Riz Ahmed’s film Mogul Mowgli (2020).

It’s on stage where Vasan also flexes her musicianship. Last.fm describes the multi-faceted performer’s style as “a heady mix of intuitive folk, raw blues, and quirky country.” And, back in 2016, Vasan combined these talents to perform a bluesy tribute to Shakespeare's play As You Like It, in a short film for the British Council called Come To Me.

Meanwhile, the actor has been vocal about Asian representation in both theatre and film. “When I’m asked what my family make of what I do for a living, some people aren’t convinced when I tell them that they’re supportive. It doesn’t fit into their stereotype of the unbending Asian parent,” Vasan shared, via the Mogul Mowgli website. “No one in my extended family (past or present) had ever pursued acting or singing professionally, and there is still a lot of societal anxiety over the idea of a woman in the arts. But people’s views can evolve.”

In many ways, Vasan’s role as Amina in We Are Lady Parts also plays its part in evolving people’s views. Speaking to Bustle, Vasan said that while the series was not “representative of all Muslim women”, We Are Lady Parts does show that they “have different world views, and different viewpoints”.

“Nida [Manzoor, We Are Lady Parts creator] wanted to portray Muslim women with joy, love, and sisterhood,” Vasan continued. “That was always her intention, and that was the intention of the show, and I think it comes across.”

As the We Are Lady Parts synopsis explains, straight-laced Amina is “quickly swept up in the band’s anarchic energy,” but she later “becomes torn and caught up between two different worlds – that of her more strait-laced university friends… and the world of Lady Parts.”

She added: “Nida and I sat down and discussed Amina's obsession with finding [a romantic partner], and ultimately it’s filling a void. She suffers from stage fright, which comes from a real fear of acceptance and people laughing at her, and I can definitely relate to that. We tend to see actors as extroverts, and actually some of us are introverted. So I think young women can watch this show, and relate to that shyness and awkwardness, and know it’s fine and not something to be ashamed of.”

More like this
This 'Emily In Paris' x Blackpink Crossover Is Beyond Iconic
By El Hunt
Olivia Colman Stars In First-Look Trailer For BBC's 'Great Expectations'
By Sabah Hussain and Sam Ramsden
Claire Foy Spoke Out About 'The Crown's Gender Pay Gap
By Sam Ramsden
Armani Jackson Is Following In His Famous Actor Sister’s Footsteps
By Catharina Cheung
Get The Very Best Of Bustle/UK
Sign up for Bustle UK's twice-weekly newsletter, featuring the latest must-watch TV, moving personal stories, and expert advice on the hottest viral buys.