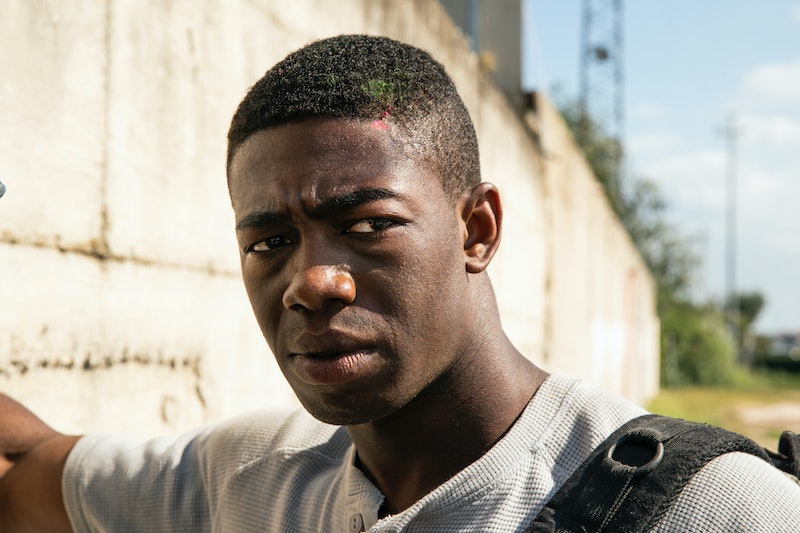 Spoilers ahead for We Are Who We Are Season 1 Episode 4. The adult and teenaged universes of We Are Who We Are have mostly existed in unnerving parallel, each defined by their own inscrutable hierarchies, rife with in-groups and outcasts. The main difference, of course, is that the politicking among the high school set is inconsequential. Hearts get broken and feelings get hurt, but the same kids — Caitlin, Danny, Britney, Sam, Craig, and now Fraser — party on. In fact, the show has been so languorously suspended in time it’s possible to forget that Craig (Corey Knight) is only moonlighting as a teenager abroad. By day, he’s a soldier in the US Army, and in the most recent episode of We Are Who We Are, he ships out to Afghanistan.

The episode starts the day before that happens. The gang, including Craig’s young Italian girlfriend Valentina (Beatrice Barichella), is at the paintball park, playing make-believe war. In a macho violation of the 3-shot rule, Danny and Sam fire round after merciless round into Fraser, who they blame for the changes they see in Caitlin. In contrast, when Craig has a clear shot to stop Caitlin from capturing his team's flag, he doesn’t take it. He’s playing a children’s game, and these are his last few hours in a world where winning and losing don't matter. “I just hope you handle yourself better over there,” Danny tells him later, still on the opposite side of that understanding.

The rest of the episode’s hour is divided between haphazard, youthful romance and the gang's customary hedonistic bubble. Craig impulsively asks Valentina to marry him before he deploys; hours later, we’re at their wedding. It’s an off-to-war ritual that invokes simpler times and simpler international conflicts. If Valentina pressed a daguerreotype into Craig's palm at the altar, it wouldn’t have felt out of place.

Their reception venue, however, is the white-walled villa of a Russian oligarch. There’s breaking and entering and skinny-dipping, video games and public sex. But if the excess of it all feels thoroughly modern, the underlying impulse is timeless: to use up every last minute before the clock runs out. When the the clock finally does, Craig wakes up while the rest of the teenagers lay in a sloppy puddle in the living room. As he searches for his clothes, he can’t take his eyes off of them. The look on his face is unreadable, but the point of the scene is unmissable: There’s no sense here in who gets to stay asleep and who has find his stars and stripes boxers and catch the bus back to base.

Craig doesn’t wake anyone up to say goodbye as he leaves, not even his new wife. “Make America and yourself proud,” Colonel Sarah Wilson tells each of the men about to deploy as, unbeknownst to her, her young son Fraser sleeps off his hangover in a stranger's vacant mansion. Craig heads for the truck that will take him to the plane to take him to a war we're not really fighting. With its MAGA hats and debate footage playing in the background, the series feels almost destined to end with the 2016 election, but until then, this is the most political it’s felt.