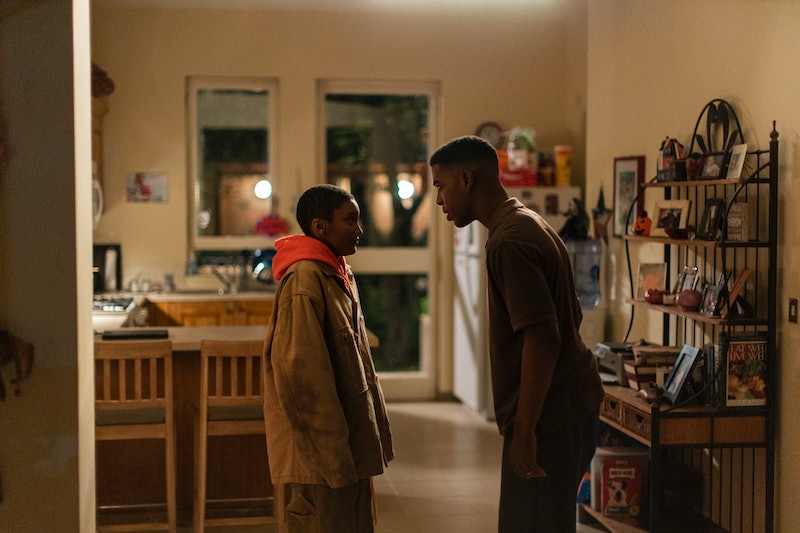 Spoilers ahead for Season 1 Episode 5 of We Are Who We Are. As the members of the Poythress family test the contours of their identities, the family itself buckles. We Are Who We Are has from the first episode been preoccupied with self-understanding, but in this most recent episode, identity is a verb. Jenny Poythress, unsatisfied as a dutiful wife, has an affair. Caitlin, daddy’s little girl, isn’t sure she’s a girl. Danny, rendered fatherless by Richard’s neglect, pursues the faith of the biological father he never knew. And Richard Poythress, man of the house, finds no one is waiting for him when he gets home from work.

It would be unfair to say that the Wilsons moving in next door is what's flung the Poythresses into disarray, but they’re at least the weeds breaching the cracks. Fraser provides Caitlin with encouragement — and an extra pair of hands to finally buzz off the two feet of hair that gives her away as a girl. Maggie reminds Jenny that she used to be more than a military wife and a reflection of her husband's values. And for Richard, Sarah Wilson is an insult to his choking machismo: a woman who effectively controls him, whose pickup truck, she insinuates, literally has more horsepower.

Until this week, it’s been easy to overlook the “we” in We Are Who We Are. But now that our characters are finally behaving out of character, how we define each other simply by dint of defining ourselves has been exposed. When Jenny exerts control by pursuing a relationship with Maggie, it changes Richard, too; he's no longer husband to a perfectly compliant wife. And when Caitlin cuts her hair, Richard is apoplectic. If she’s not his little girl, then who is he to her? Richard is quick to blame Fraser for the transformation, because something extrinsic to the household is a more digestible explanation. The Poythresses are who they are; it’s the Wilsons who are scrambling, manipulating, interfering.

We are to some extent, the episode postulates, who we let each other be.

Desperate to maintain the status quo, Richard compels everyone to answer to him. He demands that Caitlin’s hair be the length that he decides, that Danny be awake when he decides, that Jenny has sex with him when he decides, regardless of her tears. It’s a violent, knee-jerk and likely short-sighted response to losing control, but it’s also to some degree effective. When he screams at Caitlin, she crumbles into him, needing him again. After he forces himself on Jenny, she begs him to be more of a father to Danny, transforming back into the plaintive wife. We are to some extent, the episode postulates, who we let each other be. Identity, especially within families, is some weird chemistry of decisions, actions, and permissions.

It’s an idea crystallized when Giulia, the Italian girl Caitlin’s spent the night kissing, asks how she got her mustache to stick. It’s unclear if Caitlin really believed Giulia didn’t know she was a girl or if the fact of it being unspoken was enough to let Caitlin be Harper, a boy from the US army base. But once the reality is acknowledged — the promise broken — Harper dissolves.

Perhaps what the Wilsons represent, then, is a place where no one has yet made any promises to each other. For Fraser and Sarah, Caitlin can be anything she chooses. For Maggie, Jenny is the free-spirited Nigerian woman who prefers the food she grew up with to the American stuff she serves her kids. But inside the Poythress house, there are limits. At least for now, everyone is who Richard allows them to be.