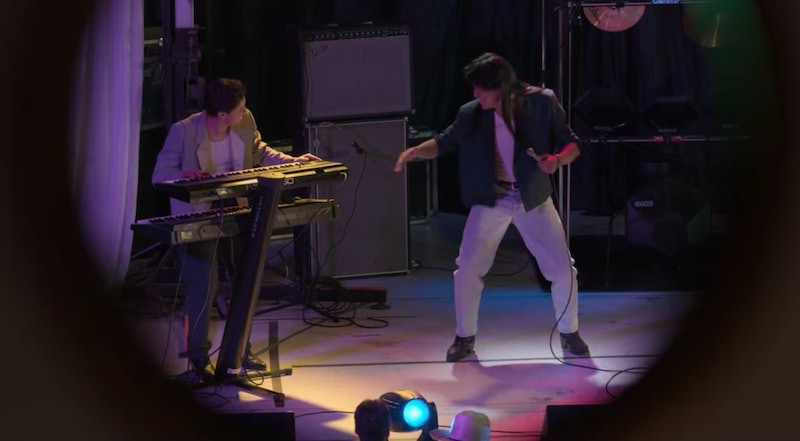 Netflix's Selena: The Series is a pretty faithful retelling of Selena Quintanilla's rise to stardom, right down to the band that opened for her and the Los Dinos on tour. In the show, Selena and her family tour with Los Bad Boys, a two-man band comprised of Pete Astudillo (On My Block's Julio Macias) and Joe Ojeda (Carlos Alfredo Jr.). They're based on two real Tejano musicians who opened for Selena y Los Dinos and went on to join Selena's band for her solo career, touring with her until her untimely death in 1995.

Per The Houston Chronicle, Astudillo and Ojeda hailed from Laredo, Texas and called their band The Bad Boyz. In 1987, they were looking for their big break when The Bird, a DJ at the local Roxy club, offered them a gig to play during a Tuesday Tejano night. "No one went because no one knew us,” Astudillo said. The club's management liked them, though, so they promised that if a big band came to perform, The Bad Boyz could open for them. A month later, Selena y Los Dinos were scheduled to play.

“And that was our break, to open up for Selena,” Astudillo said. “We met them that night at Roxy’s, and after the show, we spoke to her father and to [her brother] A.B. After the show ended, Mr. Quintanilla approached me and asked me about management and booking."

The two were initially hired to open for Selena y Los Dinos in different cities, but Selena's dad, Abraham, later brought them on to join the main band. Abraham was reluctant at first, since the band wasn't doing well at the time and he didn't want to have to pay two more musicians. But according to Astudillo, A.B. eventually convinced him.

As Joe Nick Patoski wrote in his 1996 biography Selena, Astudillo became a back-up singer who could harmonize with Selena and also write Spanish lyrics for A.B.'s compositions, while Ojeda became the second keyboardist alongside Ricky Vela. At the same time, Quintanilla hired guitarist Chris Pérez, who later married Selena.

Selena y Los Dinos went on to enjoy success as the most popular Tejano group fronted by a female singer. Per The Los Angeles Times, Selena had conquered the Tejano market by the early 1990s, and her 1993 album Live! won a Grammy Award for best Mexican/American album. Selena and her bandmates were poised to make a major break into the English-speaking market before she was shot and killed on March 31, 1995. They posthumously released Dreaming of You, the band's fifth and final album.

“It’s very sad, of course,” Astudillo told The Houston Chronicle in March. “I get nostalgia and I start thinking about the things we did, or where and when we played." But after 25 years, "it brings a little comfort that she and we did something that stands the test of time. The music is as relevant as it was 30 years ago."

Astudillo, Ojeda, and Pérez remain friends to this day. After Selena's death, Ojeda joined Pérez's new band, The Chris Pérez band. They're still churning out music together, having released the single "Just Say Goodbye" on April 2. Astudillo also created his own band, Tekno-Mex, which Ojeda is a member of too. They both continue to collaborate with various Mexican musicians like Sonja de la Paz, often with the help of the Quintanilla's production company, Q-Productions.

"I am grateful to call this crazy Mexican/monster musician my brother and partner in crime for 35 years," Astudillo wrote of Ojeda in a recent Instagram post.

More like this
Watch The Thrilling Teaser Trailer Of 'Shadow And Bone' Season 2
By Gretchen Smail and Jack Irvin
Mike Flanagan Teases 'The Midnight Club' In This Exclusive, Creepy Clip
By Grace Wehniainen
Twitter Is Pouring Out Some Zhampagne As ‘Schitt’s Creek’ Leaves Netflix
By Brad Witter
Jeffrey Dahmer’s Arresting Officer John Balcerzak Got His Job Back After Being Fired
By Grace Wehniainen
Get Even More From Bustle — Sign Up For The Newsletter