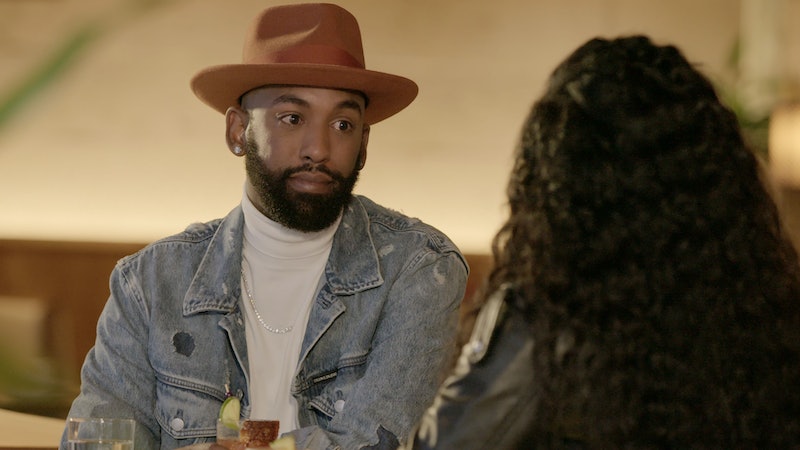 Things didn’t end well for Diamond Jack and Carlton Morton on Love Is Blind Season 1. After getting engaged in the pods, the two had an explosive fight on their vacation to Mexico and became the first couple on the season to break up.

Nervous that Diamond would reject him due to negative experiences he’d had in the past, Carlton decided to wait to tell her he’d dated both men and women until after he proposed. Once on vacation, he felt it was important to have a conversation about his sexuality. Unfortunately, Diamond responded badly.

Though she was initially calm and decided to take the night to think about what he’d said, things escalated the next day. It came across as if Diamond thought Carlton being attracted to men meant he couldn't also be attracted to women, and she accused him of "play[ing] the experiment." She later clarified to Entertainment Weekly that she was only upset that Carlton hadn't told her sooner, but the damage was done. The two fired shallow insults at each other and Diamond threw a drink in Carlton's face, then walked away for good.

"I feel like both of our hearts and who we truly are got overshadowed by assumption, defense, and pride," Carlton said in a confessional.

Diamond told EW that that she and Carlton were eventually able to reconcile their differences. "Carlton and I were able to establish a friendship ... but it took a very long time for myself," she said. "I finally reached back out to him after he made several attempts to reach out to me and it started out as small talk, like happy birthday or happy new year or hope all is well. He did apologize. So I finally reached back out to him and we've had conversations."

She added that she doesn't regret what happened between them. "The experiment itself was wonderful and I love how everything played out," she said. "I hope more people do this show and take a leap of faith. Trust and have faith that something good can happen for you because it almost happened for me. This connection with Carlton was definitely real."

However, two years after filming ended, there appears to still be bad blood between the two. They no longer follow each other on Instagram, and Carlton recently shared a post accusing Diamond of being biphobic. “You all did NOT hear the things Diamond said to me,” he wrote in part. “Imagine always having to defend yourself knowing someone’s BIPHOBIA AND HOMOPHOBIA jumped right out! Enough is ENOUGH! So sick of when I speak up for myself, ‘oh that’s just the angry Black guy.’ STOP PLAYING WITH ME. Because people RARELY like when I PLAY BACK.”

Outside of the drama, Diamond and Carlton appear to each be in a good place. Diamond is now the CEO of The Lady Box, an earring retailer, while Carlton notes in his Instagram bio that he’s also an entrepreneur. He appears to be living in New Orleans, as he posts photos from there frequently.

“Last year was a tough year for me. I didn’t think I’d make it out. I was hurting and didn’t know how to ask for help,” Carlton wrote in a May post reflecting on his mental health journey. “At the end of the year, I prayed a very specific prayer and God answered. I found happiness, love, and so much more. Some days I still struggle with the traumas of my past. Some days I’ve felt like the world was against me. On these days, it’s made me an angry person out of self defense. But with growth, you begin to realize not everyone is out to get you. I just want to publicly apologize to anyone who I may have hurt while I was still processing my traumas. I promise I have a good heart. People don’t always get to see that and that hurts but I know this is one of the first steps to growth and becoming a much better person.”