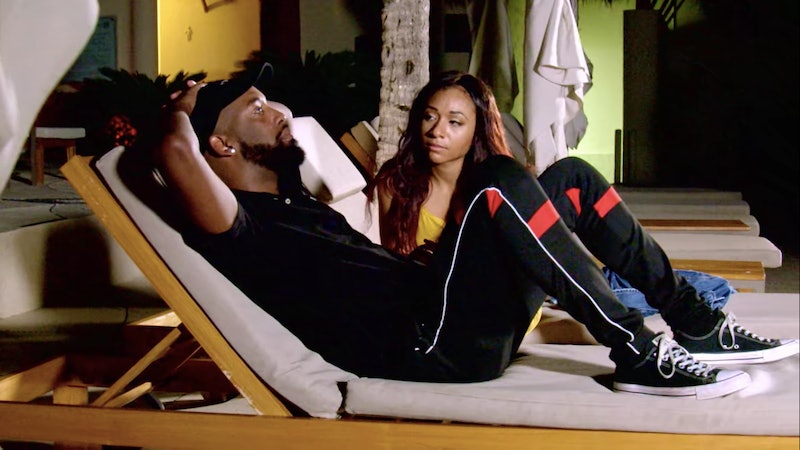 One of the more explosive storylines on Netflix’s new hit dating show Love is Blind was that of Carlton and Diamond, the only couple to break up on camera before making it to the altar. Early on, Carlton reveals during a camera confessional that he's dated people of different genders. But Carlton doesn't share this information with Diamond until after she’s already accepted his proposal. Once he does tell her, Diamond says she felt deceived, and Carlton is immediately defensive, expecting Diamond to reject him for his sexuality. The whole conversation turns into a dramatic, made-for-reality-TV fight that includes a thrown drink, the "b" word, and some carefully chosen Beyoncé lyrics.

For people watching at home, the encounter brings up a critical question: when you should come out in a relationship if you're bi, pan, ace, or any other sexuality that isn't apparent based on the person you're dating. Though it's never on you to come out if you don't want to, wanting to share this aspect of your life with a new partner is beyond valid. Exactly how to have that conversation is a little more complicated.

Allison Moon, sex educator and author of Girl Sex 101 and the forthcoming Getting It: A Guide to Hot, Healthy Hookups and Shame-free Sex, thinks that waiting to tell a partner about your sexuality probably isn’t the best idea. Moon says that the best time to come out in a relationship is “as soon as what you do with your body becomes their issue.” She says around the time you start discussing relationship expectations — are we exclusive? what does monogamy look like for you? do you ever want to be married? — is a good time to talk about your sexuality, if that's what you want to do.

Janielle Bryan, MPH, MPCHS, a sex educator and public health official in Philadelphia, recommends coming out whenever you feel comfortable doing so, which could be in your dating app bio, on your third date, or on your thousandth date. She also suggests practicing the coming-out conversation with a trusted friend or a mental health professional. “Have lots of conversations,” Bryan tells Bustle. “It sounds silly, but sometime it helps just to say the words out loud.”

If you’re really struggling to have that talk with your partner, Moon suggests using the “Difficult Conversation Formula,” which was developed by her partner and fellow sex educator Reid Mihalko. The formula goes, “I have something to tell you. This is what I’m afraid of… This is what I’d like to have happen… And this is what I have to tell you…” You fill in the blanks based on your particular situation.

Bryan suggests saying up front what this information means for the relationship moving forward. “If you’re coming out to your partner, don’t only explain how you’re feeling, but also what your hopes for the relationship will look like,” Bryan says. “That also gives the person responding a way to gauge whether or not they want to stay in the relationship. Most people are wondering: How does this affect me?”

But no matter how you decide to bring it up, Moon points out that “how you deliver the news is just as important as what you actually say.” (In other words: Probably don't take Carlton's lead on this one.)

“Bisexuality, for example, isn’t anything to be ashamed of, so disclosing it as just another aspect of who you are is a good idea,” Moon says. “If you think disclosing an important thing about yourself will be a deal breaker, then break the f*cking deal and move on. There are plenty of people out there who, for instance, love bisexual men. So ditch the biphobes and make room in your life for the people who want to date you.”

Finally, remember that no matter what you think is going to happen, you don’t actually know until you do it. You might be nervous about this conversation because a past partner wasn't too accepting. But your current partner isn’t your past partner — or your parents, or your friends, or whoever else reacted poorly in the past. Give them time to digest the information and be open to answering questions they may have — to a point.

“Remember that you know that you have no responsibility to stick around to receive ... abuse,” Moon says. “You also don’t have to be the oracle for anyone’s education, unless you want to. So while you can opt into helping them understand, you can also give them some Googleable terms and let them get back to you when they’re ready.”

While there are no hard-and-fast rules about when you should come out in a new relationship, one thing is for sure: If you know your sexuality from the get-go, consider coming out before getting engaged to someone you've never seen on a reality dating show.