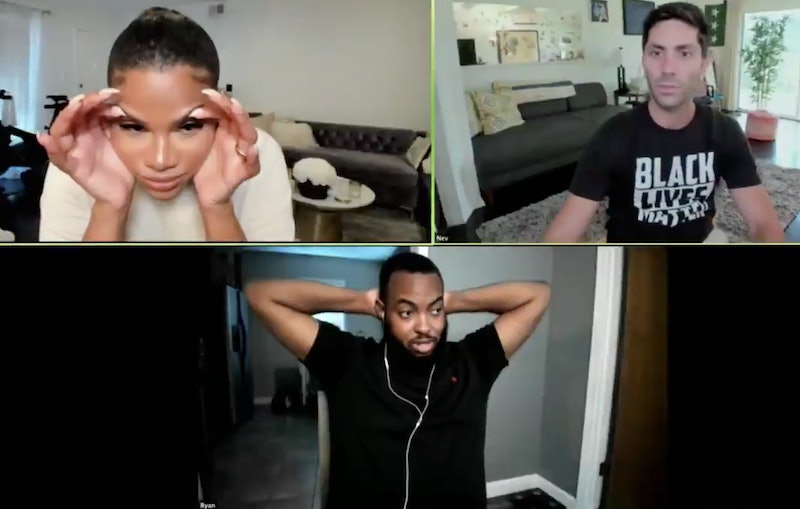 Just when it seemed like the virtual season of Catfish couldn't get any messier, along came Ryan and Micah. Ryan thought he met Micah on Tinder, but when she began persistently asking him for money (often in exchange for intimate photos), it raised a red flag for Ryan's friend Whitney. So she called on Nev and Kamie to investigate in the Sept. 23 episode.

It didn't take long for the co-hosts to confirm that Ryan was getting scammed, but that was only the first of many problems. The scammer, named Tony, was running a full business by saving nudes from the OnlyFans accounts of multiple women and selling them to men online. He claimed he was "teaching them a lesson" to not post private photos or send money to strangers. But it's clear that Tony was — and still is, according to a story on the real Micah's Instagram — just doing it for profit.

The silver lining amid all of this is that Ryan did meet the real Micah on Zoom. Nev and Kamie asked her if she was single, knowing Ryan would be interested, and she gave him her Instagram handle when filming ended. According to the show's two-month follow-up, the two formed a connection and planned to meet in person as soon as possible.

Are they together now? It doesn't look like it. Micah's Instagram shows no evidence that she's with someone, and her Facebook relationship status is single. Other than that, she seems to be doing well. She recently took a trip to Los Angeles and is working on building a YouTube channel. Ryan's Instagram offers little info with only two posts, but one from July says he's working on a podcast.

More like this
Mack & Domynique Reportedly Had An "Epic" Breakup On 'Married At First Sight'
By Brad Witter
The Bachelor’s Christina Mandrell Comes From One Of Country Music’s Most Famous Families
By Brad Witter
All The Clues Clint & Gina Aren’t Still Together After 'MAFS' Season 16
By Brad Witter
Shaq Might've Spoiled His Relationship Status With Kirsten After 'MAFS'
By Brad Witter
Get Even More From Bustle — Sign Up For The Newsletter
From hair trends to relationship advice, our daily newsletter has everything you need to sound like a person who’s on TikTok, even if you aren’t.