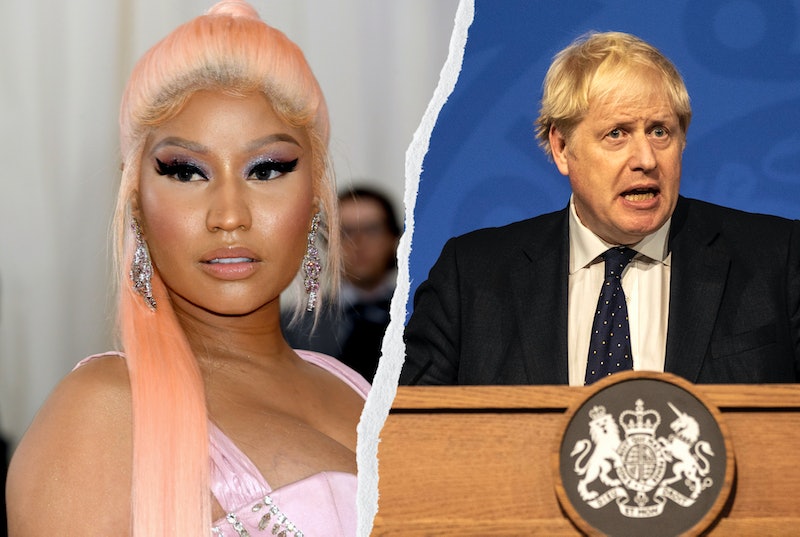 Nicki Minaj mocked Prime Minister Boris Johnson in what can only be described as a bizarre Twitter video after he dismissed the rapper’s COVID-19 vaccine comments during a Downing Street news conference. Sounds straightforward enough, right? Wrong. Here’s the lowdown.

As previously stated, Minaj came up during a press briefing on Tuesday, Sept. 14, when professor Chris Whitty was asked about the rapper’s previous tweets that suggested the coronavirus vaccine is linked to impotence. Responding to the question, Whitty debunked Minaj’s claims, adding that those who continue “peddling untruths” about the vaccine “should be ashamed.”

This prompted the prime minister to confess that he is “not as familiar with the works of Nicki Minaj as I probably should be,” adding, “but I’m familiar with Nikki Kanani, superstar GP of Bexley who has appeared many times before you, who will tell you that vaccines are wonderful and everybody should get them.”

Per the Metro, Minaj uploaded the Twitter voice note moments later. Responding to Johnson’s comments shortly after the Downing Street news conference, the “Starships” hitmaker tweeted, “I love him even tho I guess this was a diss? The accent ugh! Yassss boo!!!” before uploading a followup voice note captioned, “send this to the prime minister & let him know they lied on me. I forgive him. No one else. Only him.”

Mimicking an English accent, Minaj said in the audio clip, “Yes, hello, Prime Minister Boris. It’s Nicki Minaj. I was just calling to tell you I thought you were so amazing on the news this morning. And I’m actually British. I was born there. I went to university there. I went to Oxford.”

The rapper continued, “I went to school with Margaret Thatcher, and she told me so many nice things about you. I’d love to send you my portfolio of my work, since you don’t know much about me. I’m a big, big star in the United States.”

Speaking at the Downing Street briefing, Johnson and Whitty were responding to a question in regards to Minaj’s controversial string of tweets shared the previous day on Sept. 13, in which she claimed her cousin was reluctant to get a COVID-19 jab because “his friend got it & became impotent” and “his testicles became swollen.”

Speaking on Twitter, the “Anaconda” rapper also explained that she won’t be getting a COVID-19 vaccine in order to attend large-scale events such as the Met Gala until she feels she has “done enough research.”

Minaj’s comments sparked a wave of backlash on social media, including from journalist and TV presenter Piers Morgan, who accused the rapper of “peddling lies that will cost lives.” Replying to Morgan’s remarks, Minaj tweeted, “... Thanks Pierce. Love the accent. I’d love to come chat. Scones. Tea. Clown nose & big red shoes for you.”

Then Kuenssberg came into the firing line, too. The BBC’s Political Editor re-tweeted Minaj saying “2021 everyone...” Spurring on Minaj’s fans to quite literally curse the journalist, per Pink News.

More like this
What Really Happened Between Lea Michele & Sadie Sink On 'The Tonight Show'
By El Hunt
This Dark Humpty Dumpty Theory Will Haunt You
By El Hunt
Harry Styles Just Split His Pants In Jennifer Aniston’s Face
By Sam Ramsden
This Pre-'Love Island' Video Of Olivia & Zara Together Changes Everything
By Bustle UK
Get The Very Best Of Bustle/UK
Sign up for Bustle UK's twice-weekly newsletter, featuring the latest must-watch TV, moving personal stories, and expert advice on the hottest viral buys.