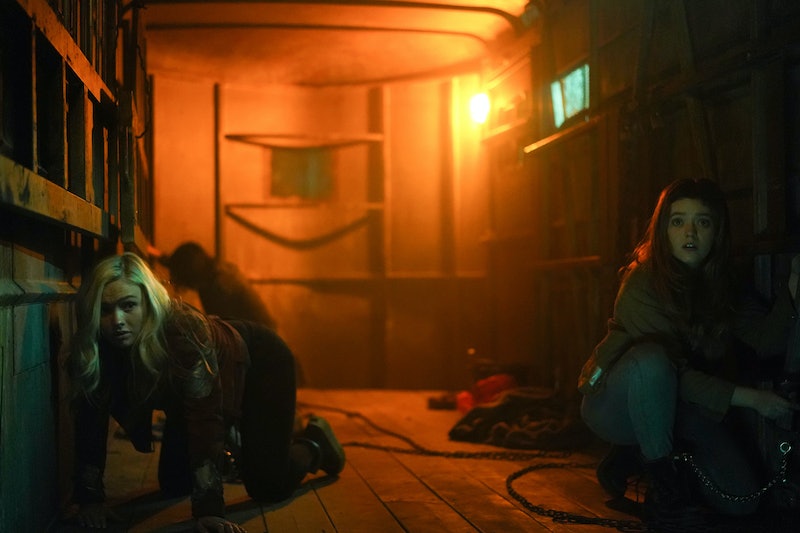 Spoilers ahead for Big Sky Episode 2. Grace, Danielle, and Michelle are trying to find a way to escape Ronald Pergman's clutches on Big Sky, and they've got a plan. Despite the fact that he kidnaps young women and sells them into the sex trade, Ronald claims he isn't evil (sure bud, whatever helps you sleep at night!), and Michelle thinks he's just extraordinarily lonely. So the trio are trying to appeal to Ronald's "good" side in the hopes that maybe he'll let them go. Their efforts haven't worked so far, but if your blood pressure has already spiked past the point of tolerable suspense, here's what happens to Grace and her sister Danielle in the book the series is based on. Major spoilers for C.J. Box's The Highway.

In the novel, Cassie eventually tracks Grace and Danielle down and rescues them. They're never able to escape on their own. There's also not an exact character like Michelle in the novel. Instead, Michelle seems to be a combination of a sex worker who Ronald kills early on and another woman named Krystyl who is locked up with Grace and Danielle. What happens to Krystyl isn't clear, but she's been long gone by the time Cassie arrives to save the sisters. Grace simply says, "There was a girl named Krystyl. I think [Ronald] killed her." If Michelle is the show's version of Krystyl, the book ending doesn't bode well for her.

That being said, the show already killed Cody off way earlier than in the novel, and Cody and Cassie weren't romantically involved in the book as they were on the show. So it's possible the series will make some changes to Grace, Danielle, and Michelle's story too. As author C.J. Box told Crime Reads, he was "very aware of the differences between writing a novel where I can control everything and turning that novel over to a large team of producers, writers, actors, crew, network executives, and so on. Changes are going to be made."