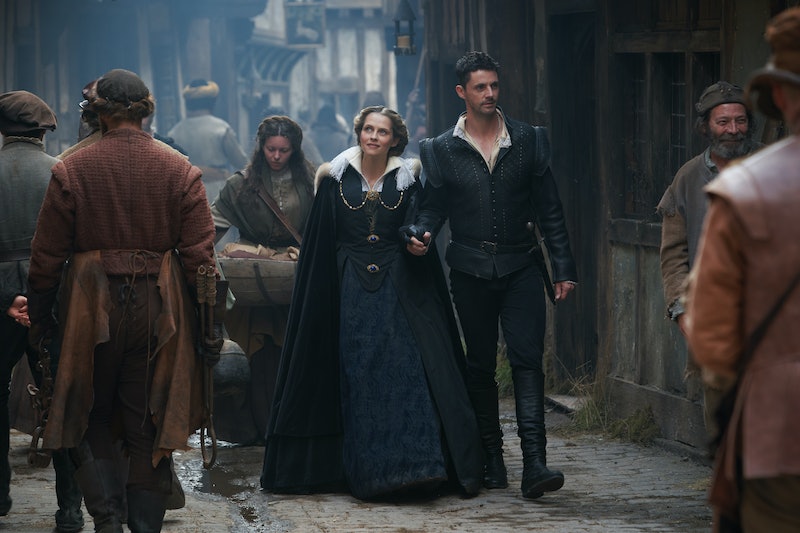 Well it's not that hard to theorise thanks to the details circulated by the show's producers, and the fact that it will be based around the second book of Harkness's series, Shadow of Night. However, some of the show's stars have revealed that the second season of A Discovery of Witches has had to divert from the books in order to make the trilogy work for the small screen.

“They’re incredibly difficult books to adapt, so there are going to be people who are huge fans of the book that might be like I am, where you’re not disappointed but you’re like: ‘Why isn’t that in there?’” series star Matthew Goode, who plays vampire Matthew de Clairmont, told Radio Times on the set of season two in 2019.

Season two will pick up exactly where the first series — and the first book — left off, with Matthew Clairmont (Matthew Goode) and Diana Bishop (Teresa Palmer) "hiding in time in the fascinating and treacherous world of Elizabethan London," where they must "find a powerful witch teacher to help Diana control her magic and search for the elusive book of life." However, some of the edits have – spoiler alert – changed the order of events, says Goode: “We now go to see [Clairmont’s] father first and then head on to see the emperor, as opposed to coming back and then… you know.”

The biggest change comes with the addition of a second timeline. As in Harkness’ book Shadow of Night, the story shifts in season two to 1590s England as Matthew and Diana “time-walk” into the past – but in a change to the text, season two also continues the present-day storylines alongside Matthew and Diana’s story. The changes have, however, had the seal of approval from Harkness herself, who worked closely with the team at Bad Wolf Studios to bring her tale of vampires, daemons and witches come to life.

“There’s definitely a contemporary storyline in the book too,” Harkness told Radio Times. “Those moments propel us towards series three, which was the purpose of them for me narratively.” If Harkness says it's ok, it's ok.

As with the inclusion of a modern timeline, not everything will take place in Elizabethan London. It was confirmed in the season two press release that there will be a focus on Di's aunts Sarah (Alex Kingston) and Emily (Valarie Pettiford) in the present day, who "must take shelter with notorious witch hunter Ysabeau de Clermont (Lindsay Duncan) at her ancestral home, Sept-Tours."

Not only does Di try to control her powers, but she also becomes caught up in Matthew's past which is seemingly darker than previously thought. Stars of the show told Radio Times that the second season would be “much darker” than the first. Then there's the continuing relationship between vampire and witch which will obviously continue to hit viewers in the feels.

After waiting what seems like forever – nearly two years is long enough – you’ll be pleased to know that A Discovery of Witches is returning to Sky One Jan. 8.

And once the second season ends, you needn't be afraid for the series to suddenly be cancelled either since Sky has already renewed it for a third season. "Season one was a brilliant introduction to the All Souls world and the love story between Diana and Matthew," Sky's head of drama Anne Mensah said in the press release.

"We can't wait for the show's fans to continue the journey with seasons two and three, become more enchanted by the characters and watch the magic further unfold."

Harkness certainly agrees, adding "Given how warmly the first season was received, I'm thrilled that we will continue with the story of the All Souls trilogy for two more seasons." Same.