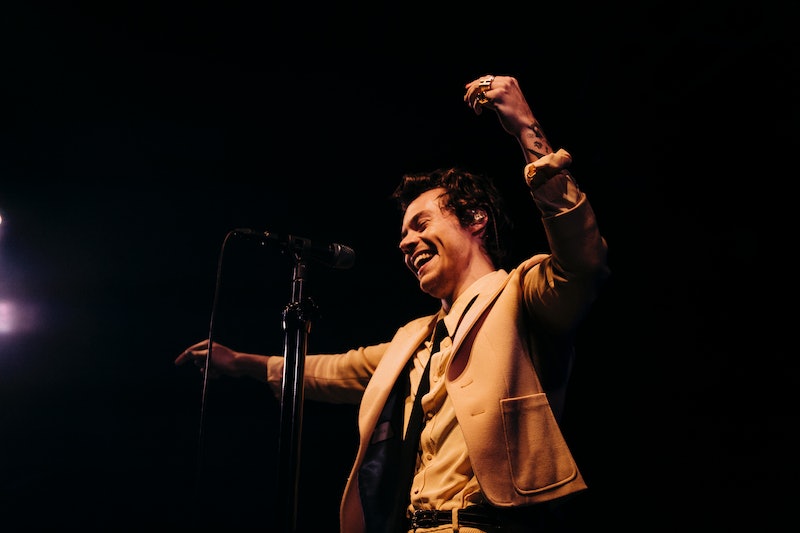 The reality of being a stan in 2019 can be exhausting. Financially, you’re expected to invest with no guarantee of return; concert tickets and exclusive merchandise are in limited supply, touts and internet fraudsters are poised to reap the benefits. Emotionally, the investment can be even greater. Pop stars have expiry dates, other lives to lead: you never know exactly when “it” is going to end. It’s trying, sometimes heartbreaking, but that doesn’t mean it’s not worthwhile. Why? Because being a stan is one of the most rewarding investments in the world.

At 25, I’ve been investing in boyband shares for two thirds of my life. The return had been minimal. Between Busted disbanding in 2005 – my school hymn book, lovingly wrapped in the jacket of their biography, a constant reminder of first loves lost – and Brian McFadden’s untimely exit from Westlife just one year earlier, I’d all but lost faith in the protective swaddle I'd allowed the pop machine to form around my heart.

That was until One Direction. To the uninitiated, they’re a boyband with millions of fans worldwide and a cultural impact to challenge that of The Beatles. To fans, they’re “the boys.” It sounds infantilising, referring to a group of (now) fully grown men as boys, but it’s borne from a sense of familiarity – familiarity and mutual respect. One Direction are where they are because of the stans, and that's something they never took for granted. Before The X Factor had even finished, fan accounts were rallying around five teenage singers they may never even come close to seeing in the flesh. But that didn't matter to them. These fan accounts, largely run by witty, intelligent, courageous young women, dedicated themselves to the success of the boys, making it their mission to see Harry, Liam, Niall, Louis and Zayn achieve everything they wanted and more despite extreme and unprovoked judgement. The power they demonstrated was unlike anything the Internet had seen before, and it was inspiring.

In his 2017 cover interview with Rolling Stone, Harry himself explained it perfectly. “Who’s to say that young girls who like pop music – short for popular, right? – have worse musical taste than a 30-year-old hipster guy? That’s not up to you to say.” He continues: “You gonna tell me they’re not serious? How can you say young girls don’t get it? They’re our future. Our future doctors, lawyers, mothers, presidents, they kind of keep the world going.” At the time, Harry was lauded for candidly shutting down the outdated notion that teenage girls lack a certain prowess when it comes to choosing music. But really, it's much, much more than that; what it is, is recognition.

It’s not necessary to know that your idol validates the passion you have for their music, chances are you’ll continue stanning, tweeting, and streaming with little thought to how they perceive you. The assumption that they appreciate a roof over their head is, often, enough. But, when that idol’s entire career has been crafted for and by the indistinguishable power of young women, it’s different. Then, it’s a return that can’t be taken lightly.

Outside Harry’s (until that morning, secret) Camden show, fans wait patiently. On occasion, Harry and his team have been known to send pizza, blankets, warm hoodies from the merch stand, out to the dedicated few that earn their front row spot by investing perhaps the most valuable currency of all, time.

Taline started queuing at 8:15am, that’s 45 minutes before the venue was announced on Twitter and more than 12 hours before Harry’s scheduled performance time. She worked out the gig’s location using breadcrumbs left by the singer's team; “CAM” was part of the ticket purchase code sent to fans that had ordered ‘Fine Line’ from Harry’s website, and a previously scheduled show at the Electric Ballroom was given a mysterious last minute venue change. Taline, thanks to her efforts, is number 45 in the queue. It’s cold, wet, and incredibly gloomy, but Taline isn’t gloomy at all. She’s pretty much the complete opposite. “This is my first time ever seeing him live and I’ve been a fan for 9 years,” she says. It means a lot to her, and everyone else here, that Harry speaks so fondly of the people who have helped make him who he is today. It’s what makes Harry, well, Harry.

Speaking with fans, it’s impossible to ignore the sheer magnitude of Harry's impact. By now, he's bypassed pop star and catapulted himself into a whole new echelon of cultural significance. You can see it in fans' unwavering dedication, in the packed lunches and plastic ponchos they've bundled into tote bags as they line the streets of Camden. You can hear it too, in the hushed singing that weaves its way up and down the tightly packed queue and in the friendships being formed over the collective adoration of an icon, but, perhaps most significantly, you can hear it in their words.

“The issues he brings to the forefront, he doesn’t make it about himself. Even if he’s disconnected from them he’ll still talk about them [and] make sure they’re seen in the media by his fans.”

Bonny, 22 from The Netherlands

"He really gives us a safe space, he created a safe space in his concerts. Talking from personal experience, he helped me accept myself for who I am and it’s just simply amazing.”

“You can tell that he really accepts us for who we are, he really shows us that he knows us and appreciates us.”

“His mottos and what he stands for are really important. He’s always about being kind to other people. I think he’s a really good pop artist to have as someone you look up to”

“I was 8 when I first saw [One Direction] and now I’m 17. They’ve been my influence for my whole life… He’s actually changed my life, I’ve got a poster with me that says you changed my life.”

“I think it’s really important what he’s doing. He’s normalising a lot of stuff and bringing in creativity and new concepts that a lot of artists are too scared to do.”

“It’s cool to have somebody who has been able to explore themselves so publicly, I think that’s really cool to see as young people. We’re on a journey with Harry, seeing what he’s going to make and stuff… That’s really cool.”

“It’s refreshing, especially as a man. It doesn’t feel like he’s doing [anything] for attention, he’s just doing it because he wants to. He really is himself unapologetically. The way he doesn’t really care… it’s inspiring to see him completely be himself.”

Interviews have been condensed for clarity

More like this
The Spice Girls Just Dropped A Brand New Music Video
By Sam Ramsden
At 28, Melanie C Was Falling In Love & Reclaiming Her Confidence
By Olivia-Anne Cleary
Girls Aloud Announce Primark Collab In Honour Of Sarah Harding
By Sophie McEvoy
Stormzy Made A Passionate Speech About The Importance Of Diversity
By El Hunt
Get The Very Best Of Bustle/UK