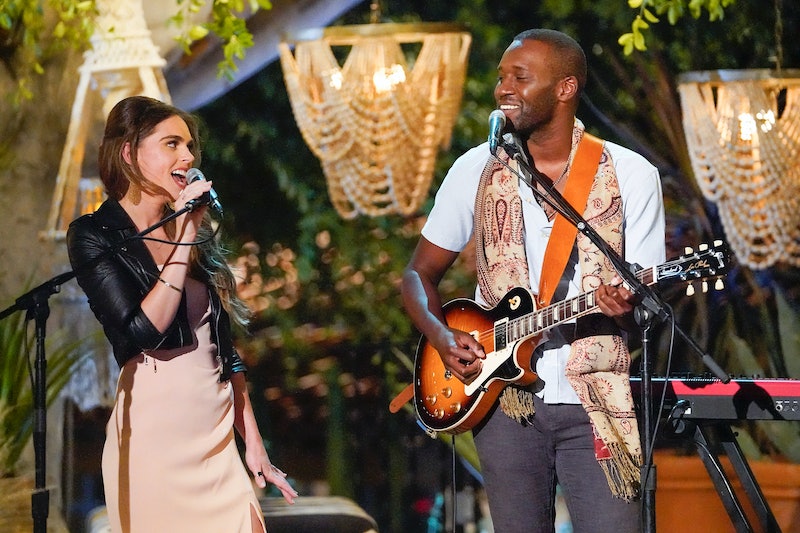 By the time The Bachelor Presents: Listen To Your Heart ended in May, the coronavirus pandemic was well underway. That means winners Bri Stauss and Chris Watson didn't have much time to enjoy their relationship. According to Access Hollywood, the pair got two weekends together before having to quarantine in different states, and they've since had to keep the love alive over FaceTime with a few in-person visits in between.

The pair reunited for the first time on June 13 after 94 days apart. "Our story just keeps getting better Chrisss! I love you," Bri captioned an Instagram post. Chris shared the same photo, writing, "With so much uncertainty in quarantine you have been my rock. It’s no coincidence that we reunited around #lovingday...love you more now than I did on TV." The two also attended church together on Sept. 27, went to a socially distanced concert in Bri's home state of Utah on Oct. 4, and of course, were together to perform for Clare Crawley and Dale Moss on The Bachelorette.

Chris and Bri's original plan after LTYH was to release an album and go on tour. They managed to accomplish one of those things: their debut album, Chris and Bri dropped on May 18. In lieu of a tour, they played their first live-streamed concert a few months later, on Aug. 18. “We’re taking it day by day with everything that’s going on, because it’s completely out of our control, sadly,” Bri told Us Weekly.

Though the couple plans to continue making music together, they're also working on solo material: Chris has a new single out, "The Truth Is," and Bri has one called "All I Want Is You." But they're doing more than focusing on their professional lives. The pair told Entertainment Tonight that they've been discussing marriage — it's just a sensitive topic for Bri, who broke off an engagement before meeting Chris. "I'm not trying to get married tomorrow. And I know Bri isn't either. We're not trying to get married next month, but in the future, for sure," Chris explained, adding "Once I met her, I'm like, 'All right, well, I don't need to be with anybody else. So, we're good."

More like this
10 Photos Of The Wildest Limo Arrivals From 'The Bachelor' Premiere
By Brad Witter
Zach Swears He Didn’t Look Up Contestants Before The Bachelor Began Filming
By Brad Witter
The Bachelor’s Christina Mandrell Comes From One Of Country Music’s Most Famous Families
By Brad Witter
Nicole & Chris Hinted They’re Still Together After 'Married At First Sight'
By Brad Witter
Get Even More From Bustle — Sign Up For The Newsletter
From hair trends to relationship advice, our daily newsletter has everything you need to sound like a person who’s on TikTok, even if you aren’t.