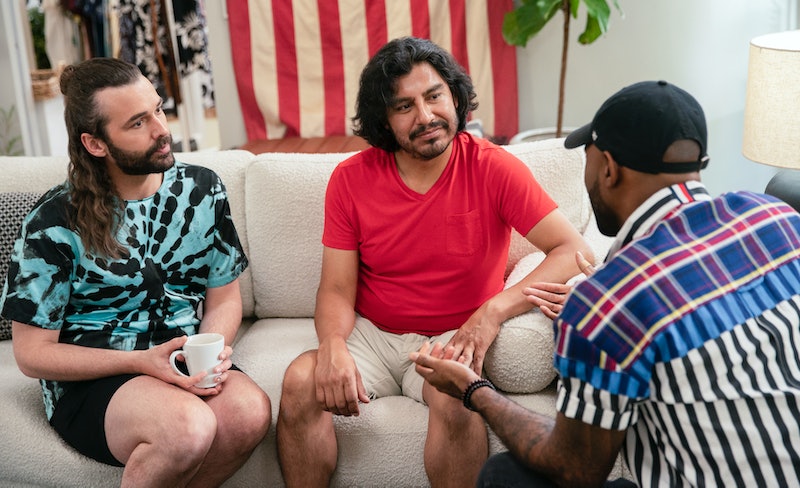 Spoilers ahead for Queer Eye Season 5, Episode 8. When the Fab Five first met Marcos Tlacopilco in Queer Eye Season 5, he and his family were running their fish and crab house while gearing up to launch a new restaurant. Marcos didn't yet have a name or finalized menu for the business, but Antoni Porowski helped decide on some dishes while Bobby Berk renovated the restaurant space. Eventually, Marcos decided to call it Alma del Mar in honor of his wife.

They had a successful soft opening, but unfortunately, they haven't yet been able to open the restaurant. Marcos told Eater Philadelphia in August 2019 that he and his business partner, José Martinez, planned to open that September, but wanted to make an aesthetic change first: instead of the black front wall that Berk had painted, he made it bright green, telling Eater that it "was too dark. We want bright." Marcos did, however, keep his grandfather's quote on the wall, which he said in the episode is "what has guided [him] during [his] journey."

Marcos was also rethinking the menu after pivoting from a focus on seafood to breakfast. He told Eater that he'd realized the Italian Market doesn't have a good breakfast scene, and is hoping their new business can help fill that void.

At the time, they were planning to feature traditional American breakfast food as well as more Mexican fare, like tacos, fish, and mango. "American culture by itself isn't much," Marcos told Eater. "The power in it is having everyone, everything, mixed together."

Marcos also told the outlet that he was considering changing the name from Alma del Mar to better reflect their new direction, but Bustle confirmed he ultimately kept it the same. Marcos' daughter, Karen Tlacopilco, also told Bustle that due to the COVID-19 pandemic, the restaurant hasn't opened yet, but they're planning to serve breakfast and lunch options with perhaps dinner further down the line.