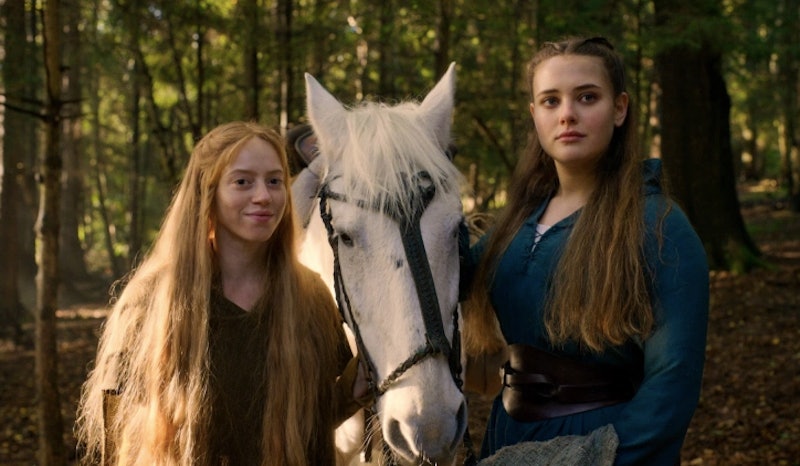 Imaginative re-tellings of the legend of King Arthur are everywhere. But Cursed goes one step further, focusing on everything leading up to the moment when most King Arthur stories start. So rather than kicking things off with a soon-to-be-king Arthur receiving Excalibur from the Lady of the Lake, Cursed focuses almost exclusively on the Lady of the Lake herself, otherwise known as Nimue (Katherine Langford). Of course, this new perspective is only partially inspired by Arthurian legend, and the story Cursed is based on can best be described as a spiritual prequel of sorts to the King Arthur legend.

The series follows Nimue, a young woman of Fae descent, who wields mysterious magical powers. After her village is destroyed by a group of religious zealots known as the Red Paladins, who are hellbent on eradicating magic users, she's suddenly tasked with a quest to bring the mythical Sword of Power to the fabled wizard Merlin (Gustaf Skarsgård). But she's not alone in her quest, as she's accompanied by a curiously-named mercenary named Arthur (Devon Terrell), as well as a myriad of other familiar Arthurian characters.

Where Cursed differs from most King Arthur legends is in its choice of protagonist. There are dozens upon dozens of stories about King Arthur and his Knights of the Round Table, but a scant few about the woman who essentially bequeathed him the power to become king in the first place: Nimue. She's often shrouded in mystery, often presented as a magical being whose concern begins and ends with Excalibur itself, rather than on Arthur. Some authors go so far as to split Nimue into two characters, as in Alfred, Lord Tennyson's retelling, where he creates Vivien, a duplicitous, manipulative woman who exploits Merlin and his magic to her own ends, which is a contrast from the generally-benevolent Lady of the Lake.

From the outset, the novel's co-creators, author Thomas Wheeler and comic artist Frank Miller, wanted their journey into Arthurian legend to be a wholly original departure from the classic King Arthur story. As Wheeler told Barnes & Noble, "I thought about how to frame the story so that my 12-year-old daughter might be similarly inspired by the mythology, the way I was when I saw John Boorman’s Excalibur. Who was her King Arthur? What character could be her entry point into this world?" His thoughts took him to one of the original legend's most mythical, mysterious characters. He explained, "The legend of the Lady of the Lake offered some tantalizing possibilities. Who was she? What was she? How did she end up this mysterious, seemingly tragic figure, with this fateful connection to Excalibur? This ended up being the spark."

In another chat with Pop Mythology, Miller explained his thoughts on why Cursed might be such a standout story in the pantheon of King Arthur legends. He said, "I’d say that beyond the fact that it has all the magic and verve of the original legend, it does have a perspective that is striking. It’s that the lead character, that of all things in Arthurian Legend, is a young woman who does come from the legends and has never been played up properly, to degree. The story is more about her journey to a rather magnificent destiny."

More like this
Netflix Shut Down 'Bridgerton' S3 Rumours About A “Very Dark” Storyline
By Bustle
'Wednesday' Star Emma Myers Thinks A Wenclair Storyline Is “Possible” In Season 2
By Alyssa Lapid
You Might Want To Rewatch This Key 'On My Block' Scene To Understand 'Freeridge'
By Grace Wehniainen
The 'Freeridge' Cast Shared Their Hopes For A Potential Season 2
By Grace Wehniainen
Get Even More From Bustle — Sign Up For The Newsletter
From hair trends to relationship advice, our daily newsletter has everything you need to sound like a person who’s on TikTok, even if you aren’t.