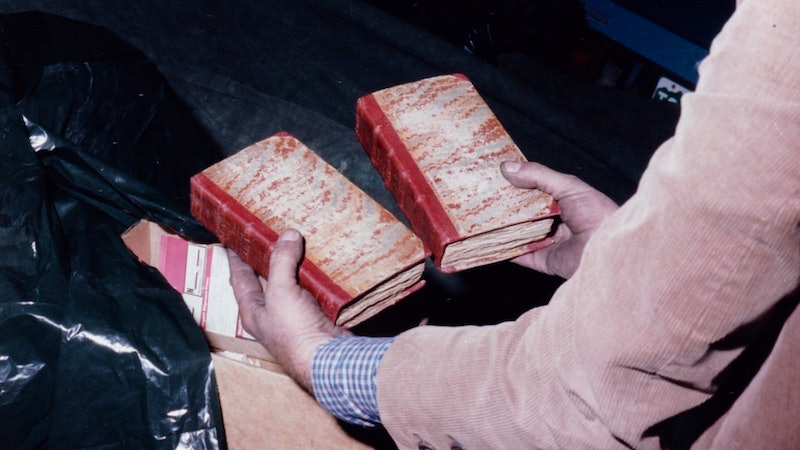 The new Netflix docuseries Murder Among the Mormons tells the true story of a 35-year-old crime: In October 1985, three bombs went off in downtown Salt Lake City, killing two. The third bomb severely injured a man called Mark Hofmann, who was eventually convicted of first-degree murder in the first two bombings after it became clear he was actually the perpetrator. At the heart of all this violence sat the Mormon Church and an important set of documents, raising a key question: What is the McLellin Collection?

William McLellin was a leader in the early years of the Latter-day Saints movement, belonging to the Quorum of the Twelve Apostles, one of Mormonism’s governing bodies established by Joseph Smith. In 1838, he declared that he’d lost faith in the church and was excommunicated for his apostasy. His tenure was short, but McLellin avoided becoming a footnote in Mormonism’s origin story largely by keeping journals throughout his life, including during his years as an apostle. The documents were believed to provide enormous insight into the founding of the new church and into Joseph Smith, McLellin’s former pupil. Some even claimed his papers would threaten the church’s foundation. There was just one problem: No one had ever seen the McLellin Collection.

Enter Mark Hofmann. Hofmann, who had been raised in the Church of Jesus Christ of Latter-day Saints, developed an interest in collecting and selling the founding documents of Mormonism. Eventually, he also developed an interest in forging those he could not source, including a Joseph Smith letter naming his son as his successor rather than Brigham Young and the so-called salamander letter, which claimed Smith had never been visited by an angel at all but rather a white salamander. Before those documents were revealed to be forgeries, though, Hofmann also claimed to be in possession of the elusive McLellin Collection.

Hofmann boasted that McLellin’s extensive papers would prove embarrassing to the church if they were ever exposed. Eventually, saddled with personal debt, he simultaneously brokered two sales of the incendiary documents, which he this time had not even bothered to forge.

Which isn’t to say the McLellin Collection was a fiction. In fact, the controversial library wasn’t even lost — only misplaced. It turns out the letters and journals of William McLellin were real and, when McLellin died, they were transferred to the possession a friend. That friend, in a transaction long forgotten until the 1985 bombings brought renewed interest, had sold the entire collection for $50 in the early 1900s. The buyer? The LDS Church.

The McLellin Collection was relocated by the church soon after Hofmann’s arrest and eventually published (an additional notebook was purchased by a private buyer years later). And while the notebooks are critical of Smith and Mormonism, they never reached the incendiary heights Hofmann imagined for them.

More like this
The Mysterious Gunther Corporation From 'Gunther’s Millions' Has Dissolved
By Brad Witter
Love Is Blind’s Natalie Claims Shayne Signed Up For 'Perfect Match' While They Were “Still Together”
By Brad Witter
'Love Is Blind: After The Altar' Season 3 Has A Release Date & It's Very Soon
By Grace Wehniainen
A New Netflix Doc Will Explore The Unsolved Murder Of Jill Dando
By Sam Ramsden
Get Even More From Bustle — Sign Up For The Newsletter
From hair trends to relationship advice, our daily newsletter has everything you need to sound like a person who’s on TikTok, even if you aren’t.