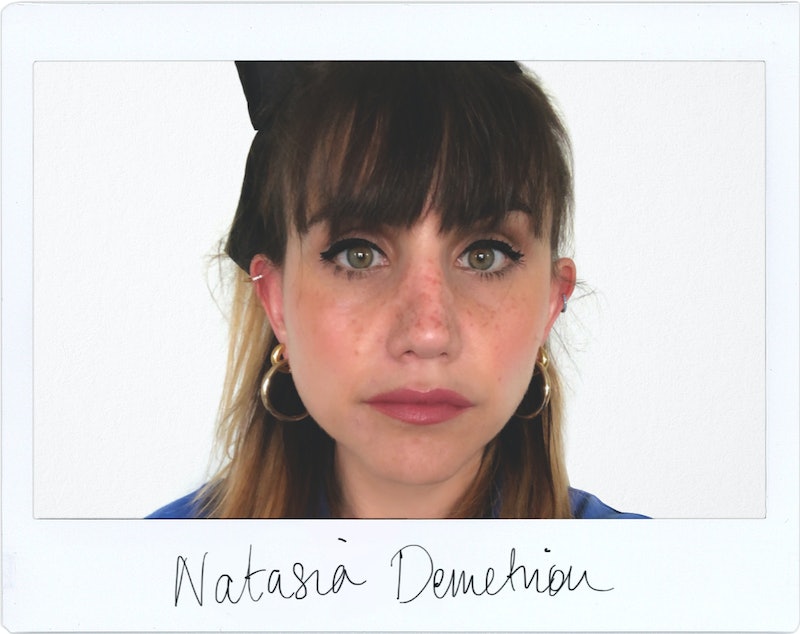 When celebrities (virtually) hang out with Bustle editors, we want to give them the chance to leave their mark. Literally. So we hand them a pen, a piece of paper, a few questions, and ask them to get creative. This time, What We Do in the Shadows star Natasia Demetriou is leaving her mark in the Bustle Booth.

When the London-born actor and comedian Natasia Demetriou first stepped on to the set of FX's ghoulish mockumentary What We Do in the Shadows to play the vampire Nadja, she expected she'd be "petrified every day." But not of playing an undead, blood-sucking woman and contending with creatures like werewolves, ghosts, witches, and zombies. "I thought that working in America would be scary and cutthroat," Demetriou clarifies — "cutthroat" pun not intended — "and this sounds so gloaty, but it’s really lovely."

The series based on Jemaine Clement and Taika Waititi's 2014 film of the same name is the biggest project of Demetriou's U.S. career thus far. And there's more Shadows in her future: Though Season 2 wraps up on June 10, the show has already been renewed for a third season. In the U.K., Demetriou got her start writing and performing sketch comedy, winning the Skinny Debutant award for her one-woman show at the Edinburgh Fringe Festival in 2014. Since then, she's become a known comedy commodity in the U.K., co-creating the BBC Three sketch series Ellie and Natasia and starring alongside her brother Jamie Demetriou in his Channel 4 realtor comedy Stath Lets Flats.

Though there may not be an obvious connection between characters like a germaphobic, puffy vest-wearing mom, a fame-mongering Love Island hopeful, a deranged manicurist, and the sex-crazed, firecracker of a vampire Nadja, Demetriou loves and finds points to relate to all of them.

"To be able to do a real interpretation of [someone] you have to sort of [have] experienced that person yourself," she says. "And it just makes you funnier. You add a million other layers — you know, I don’t know a vampire, but I know some vampire-adjacent people." To add quirks and depth to Nadja's charm, she and Clement modeled aspects of Nadja off of both Clement's wife's Greek family and Demetriou's own Cypriot relatives.

More like this
'That '90s Show' Star Callie Haverda Got Advice From Mila Kunis & Ashton Kutcher
By Brad Witter
Hailee Kaleem Wright's Topsy-Turvy Path From MTV To Broadway
By Samantha Leach
'The Queen’s Gambit' Season 2 Tweet Wasn’t From Anya Taylor-Joy
By Mary Kate McGrath, Jack Irvin and Grace Wehniainen
Ashton Kutcher Wants Danny Masterson “To Be Found Innocent” In Rape Retrial
By Jake Viswanath
Get Even More From Bustle — Sign Up For The Newsletter
From hair trends to relationship advice, our daily newsletter has everything you need to sound like a person who’s on TikTok, even if you aren’t.