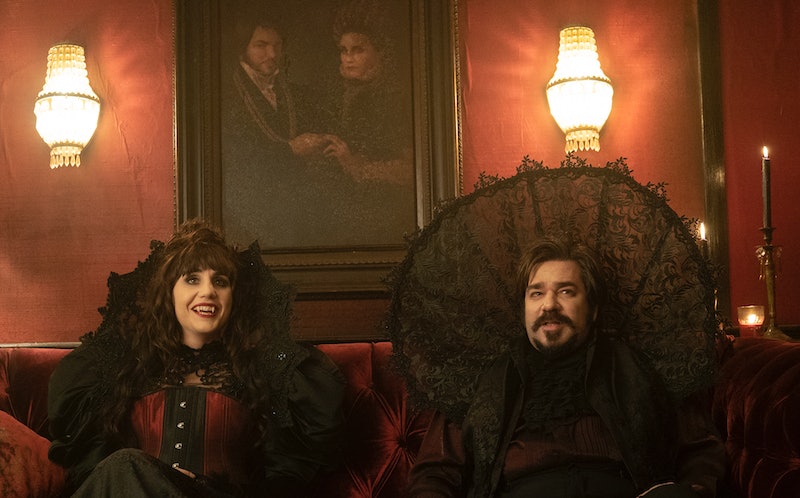 Kayvan Novak is still wearing his fangs, but he’s more than eager to take them out and show them to me. We’re sitting in a literal castle on the Toronto set of FX’s new vampire comedy What We Do in the Shadows, and Novak is regaling a group of journalists in costume as Nandor, the boorish vampire leader of a group of three undead blood suckers living together in seclusion on present-day Staten Island. The setting and the costumes are enough to immediately transport you to a different world, so much so that it's slightly jarring when Novak snaps his fangs out of his mouth to reveal they’re not actually bloodied with the remains of a fresh kill.

“That’s brisket. That’s a bit of mac and cheese,” he says, motioning to the flecked brown and orange bits of food that have burrowed between his exceptionally sharp fake canines. Though vampires in the Shadows world may not actually eat at craft services — in this world, the creators are particular about them not eating regular food at all — the problems they encounter on the show are as mundane as Novak's desperate need for some fang floss. Sure, it's impressive that Nandor, Nadja (Natasia Demetriou), and Laszlo (Matt Berry) are capable of making a spectacularly bloody mess of a human with one bite to the jugular, but have you ever tried living with a roommate who always forgets to clean up the bodies he leaves around half drained of their blood? Who ends up having to mop up that?

It's clear that Shadows is reverent of all of its pop-culture vampire inspiration — the WiFi password on set is "BuffyorBlade," and creator Jemaine Clement is fond of saying his vampires follow The Lost Boys rules. But Shadows' tone and approach, as anyone who has seen Clement and Taika Waititi's cult 2014 film of the same name knows, is completely different than most other vampire movies and TV shows by design. This is a comedy, after all, and a mockumentary, too.

"These are not the glamorous, glitzy, shirtless vampires we’ve all grown accustomed to."

"It's about these characters that are immortal and have lived hundreds of years, and just the tedium of that," Shadows executive producer and writer Paul Simms tells a small group of journalists on set. While vampire movies and TV shows tend to depict the soul-searching that's a byproduct of grappling with immortality, Shadows has a different, more earthbound approach that mines humor from the less extraordinary aspects of being undead. "[We're] sort of like, that’s 100 years of figuring out how to pay your rent, 100 years of living with roommates." If your roommate gets on your nerves now, just imagine how you'd feel after a century of having to yell at their familiar for not closing the blinds tightly enough.

"These are not the glamorous, glitzy, shirtless vampires we’ve all grown accustomed to," co-executive producer Stefani Robinson adds. But while Shadows is a far cry from the vampire fantasies of Twilight, almost everyone on set is quick to note that these vampires are certainly not devoid of sexual energy. In fact, all that bloodlust and centuries of experience in the bedroom means these three are bound to find themselves in some sexual situations — it's just that things are a little bit different on a show that's obsessed with showing the less glamorous side of being a vampire.

That especially goes for Nadja and Laszlo, who have been lovers ever since Nadja turned Laszlo into a vampire decades prior. Given the longevity of that relationship, they've "pretty much done everything," Matt Berry, who plays Laszlo, says with a laugh. "Not only to each other, but to every other kind of living thing — within reason."

And that longevity of a relationship, executive producer and director Taika Waititi posits, means that the ups and downs of being with a partner are stretched out. That could mean weeks or months of being totally fed up with your partner, instead of hours or a few days. The upside? "The makeup sex is probably way longer, probably a couple of months," Waititi deadpans.

The charm of Nandor, Nadja, and Laszlo's adventures is in the fact that they experience many of the same types of inconveniences as regular humans with a few tweaks (who wants to walk somewhere, when you can turn into a bat?). But there's one Shadows character for whom reveling in everyday tedium is actually his literal superpower. As Colin Robinson, a daywalker and "energy vampire," Mark Proksch represents the most hilariously mundane monster — one who can suck the energy, and ultimately the life, out of someone simply by boring them to death. Naturally, Colin works in an office and frequents city council meetings, where he finds plenty of people to feed on. Proksch says playing this "milquetoast monster" who wears sweater vests and pleated pants is an honor.

"I used to work in offices for many, many, many years," Proksch says. "And so I was well acquainted with people that suck your energy just through day-to-day conversations with them." He says he enjoys drawing on these "cornering episodes" that are likely familiar to any office worker who's been trapped in a listless conversation to help him play the most scarily boring monster of all. Not that Proksch thinks Colin, or even his more traditional vampire roommates, are that scary.

"[Vampires are] supposed to be historically scary... and what the movie did and what this show does is it takes something that’s scary, and then you have control over it, because they’re idiots," he says. "These aren’t scary or powerful vampires, really, in any way — they’re idiots."

Idiots who can suck your blood, turn you into a vampire, or even drain you of all your energy with a particularly dry conversation about car insurance. But extremely watchable idiots all the same.