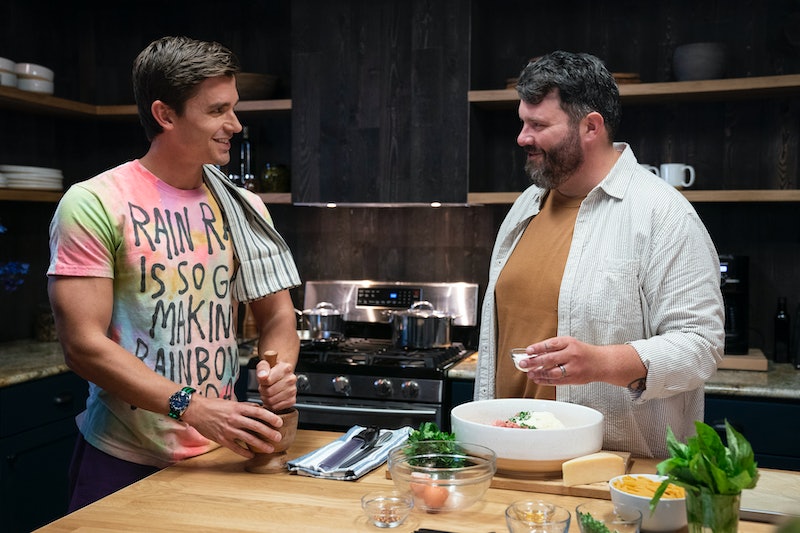 For Season 6, the Queer Eye team scoured Texas for another crop of selfless heroes in need of a few life upgrades. One of those such people is Chris Baker, who runs a foundation dedicated to building and finding both transitional and permanent housing for unhoused communities in Austin. Like many people featured on the show, Chris poured all of his energy into his work and family and reserved none for himself. In particular, he was struggling to let go of the guilt he felt after losing his mother.

Throughout the course of the episode, the Fab 5 helped Chris to see himself as equally worthy of the respect and care he was giving to everyone else. And since filming, those lessons have definitely stuck with him. In the episode, Chris spoke about his weight and his struggles with body image following a gastric bypass surgery. Though once too afraid to wear a white tee, he now confidently posts photos of himself wearing bold shirts and showing off his style on Instagram. In one picture, he paired a beige button down with one of those white t-shirts he used to avoid. In another, he rocked a gold floral shirt with the caption, “It's BOLD shirt day in Chrisville. This shirt had been scary. But it works. I demanded compliments today.”

Chris has also been making use of the tips he got from the rest of the Fab 5. He’s been cooking up a storm thanks to Antoni, showing off his newly manicured beard and hair courtesy of JVN, and sharing photos of himself and his wife in their new kitchen designed by Bobby. Most importantly, though, Chris has taken to heart that he deserves to feel good about himself and put time and effort into doing so. In June, he posted a picture of himself standing in front of a truck for his Other Ones foundation emblazoned with the message, “Everyone deserves to feel good, look good, and be healthy.” He wrote in the caption, “Feeling this way about others is great. Internalizing it is life changing.”

His Other Ones foundation, too, is still going strong. In addition to providing housing, the foundation’s website says that it has an alternative work program including pay, lunches, and transportation to and from the work site. During the pandemic, they also launched the Mobile Hygiene Clinic, which has both mobile and permanent sites providing toiletries and hygiene facility access. Chris is listed as the executive director of the organization, while his wife Elizabeth, who was also heavily featured in his Queer Eye episode, is the chief strategy officer.

Chris is clearly excited about the release of his episode and eagerly posted about it a few days before the Season 6 premiere. “Well, the cat is finally out of the bag!” he wrote alongside a series of behind-the-scenes shots. “For the few of you who still don't know, I spent an incredible, life changing week with @karamo, @tanfrance, @jvn, @antoni and @bobby this summer and you'll get to see the whole process unfold when @queereye Season 6 drops this Friday! What an honor to be selected as one of Austin's heroes for such a beautiful and compelling show. And what a joy not only to learn all about ways to care about myself, but to also spread the word of [the Other One Foundation’s] mission and vision with the world! Love ya'll.”