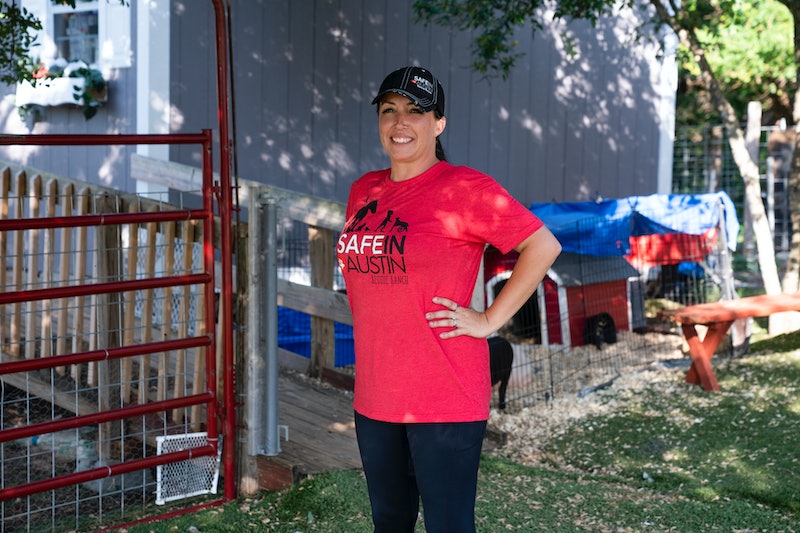 Like many of the heroes featured on Queer Eye, Jamie Wallace-Griner was having difficulty prioritizing self-care when the Fab 5 met her in Season 6. She founded the Safe in Austin rescue ranch, a last resort for animals with special needs, after being inspired by the bond between her autistic son Jackson and the family dog. The ranch houses 18 different species of animals, including some who have been abused or neglected, are blind or deaf, or have diabetes, cerebral palsy, deformities, missing limbs, or broken spines. Safe in Austin also pairs people and animals with similar disabilities, special needs, mental health challenges, and traumatic past experiences — all admirable efforts, but ones that were causing Jamie to neglect herself in the process. “There is never a moment in any part of any day, day or night, that there isn’t someone that could use my help, animal or human, ever,” she explained on the show.

Even during the pandemic, Safe in Austin continued to offer what they call “healing hearts” private family tours. “If anybody emails that is having a hard time for any reason, we invite them out for a healing hearts tour. I ask them for a little background as to what they’re dealing with, and I decide which animals to introduce them to,” Jamie told the Washington Post in October 2020. “Covid is hard on everyone, neurotypical or not, but for special-needs kids it heightens every aspect of what is different about them. A lot of people really needed us during the pandemic.”

During the historic Texas winter storm in February 2021, Jamie brought horses inside her home to keep warm from the freeze because, as she explained on Queer Eye, she has “60 special needs animals and no barn.” Her mother Karen and husband David — who nominated her for the show — explained that Jamie would have given a kidney to get a barn. But no organ donation was required; the Fab 5, led by interior design expert Bobby Berk, built her the barn of her dreams.

After Netflix released the trailer for Queer Eye Season 6 on Dec. 27, Jamie took to Instagram to gush about her experience. “So much to share and so much more to tell you, but incredibly thankful to finally get to scream it out to everyone [that Queer Eye built the barn]!!!!” she wrote on the Safe in Austin page. “I will go into much more detail soon, but the Fab 5 are as kind and genuine and loving and wonderful as they seem! How insane is it that I get to call them my friends?!?!”

While showing off the new space in another post, Jamie noted that she’s since constructed an addition to the barn. “Looking down on [the people and animals below] and my heart could literally burst,” she wrote in part. “Every single one of them have a story. Some of them joyful and some of them harder and heavier [than] any one heart should carry. All of them surrounded and snuggling with animals and people that understand.”

Jamie also revealed in a Dec. 29 post that the Queer Eye team rescued some dogs while in Texas. Sharing a photo of days-old puppies, she wrote that the dogs’ mother had died “trying to protect them in an abandoned bus” and that they all weighed less than a pound when they came to her. “We’ve referred to them as the Queer Eye litter for months,” she captioned the post, noting that three of the five puppies were given forever homes by Queer Eye employees, including one to Jonathan Van Ness.

Since filming the series, Jamie has continued her work to help animals, but she seems to have learned that it’s OK to step back and enjoy the view once in a while, too.