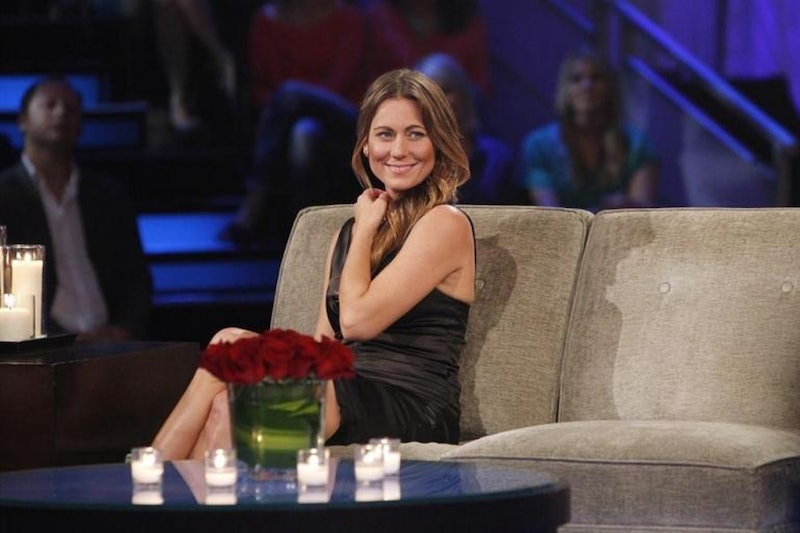 The upcoming premiere of Clare Crawley's season of The Bachelorette has fans rewatching her time on The Bachelor, where she was left hanging after Bachelor Juan Pablo Galavis chose to stay with Nikki Ferrell on the season finale. But Clare getting the opportunity to find love once again on TV has fans wondering what Juan Pablo's former contestants are up to now. Renée Oteri has been pretty low-key since The Bachelor Season 18 — even though her life changed rapidly when she returned home.

Renée moved on from Juan Pablo quickly (like nearly everyone else has) following her Bachelor stint. After returning home to North Carolina, she reunited with her longtime love, former US Army Medical Sergeant Bracy Maynard, got engaged, moved to Seattle after he accepted a job offer in the city, and got married to him — all in the span of five months. By the time that viewers actually saw Juan Pablo send Renée home after her hometown date in March 2014, she had already tied the knot with her childhood sweetheart. Now that's how you rebound from a broken heart.

Renée told PEOPLE in March 2014 that she met Bracy in middle school over 20 years prior, and made a wild prediction that ended up coming true. “He was my first crush, my first kiss, my first boyfriend,” she said. “When I was 12 years old, I wrote in my diary that I was going to marry Bracy Maynard. It’s insane!” After she moved away in high school, they kept in touch throughout the years, which eventually blossomed into a long distance relationship before parting ways once again.

After Bracy watched Renée on The Bachelor, he reached back out to her, and the couple has stayed together ever since, celebrating their sixth wedding anniversary this year. They welcomed their first child together, Jaxon, in January 2015, and Renée gave birth to their second son AJ in August 2016. She also has a teenage son from a previous relationship, Ben, and two dogs, Chance and Coop, meaning their hands are full at home.

Aside from getting married and expanding her family, Renée has largely stayed out of the public eye since The Bachelor. Although she worked as a real estate agent prior to the show, Renée's Instagram bio states that she now works as a cycling instructor. With Bachelor Nation in the rearview mirror, it seems that Renée has gotten everything she ever wanted.